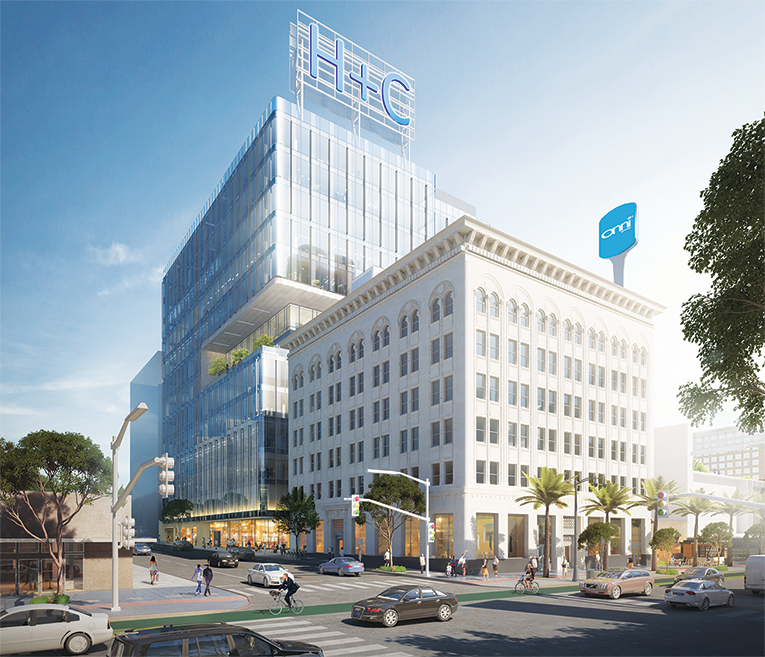 A rendering of Onni’s proposed 14-story office building extends over the historic Security Bank building. (rendering courtesy of the city of Los Angeles)

A new office complex at the corner of Hollywood and Cahuenga boulevards is being proposed for development by the Canadian firm Onni Group.

The combined three-parcel commercial project will be anchored by the historic Security Pacific Bank Building and will include a new 14-story office building up to 232 feet in height, according to plans submitted to the city of Los Angeles. Project documents filed with the city on June 17 detailed how the proposed project stretches across the one-acre site under the address 1708-1732 N. Cahuenga Blvd., but do not include any specific plans for redeveloping the historic bank building, which will remain intact. According to the L.A. County assessor’s office, the property last sold for $41 million in December 2019.

Planning Assistant with the city of L.A. Jivar Afshar said the project is now under preliminary review.

“The city will be finalizing the initial study, which will include the project objectives, as well as an analysis of environmental impacts, and an investigation into feasible mitigation measures and alternatives to reduce any potentially significant impacts,” he said. “The city prepares an initial study to determine if the proposed project may have a significant effect on the environment.”

“Once the Draft EIR is released (which all the stakeholders will be notified), there will be an opportunity for public comment (45 day comment period),” he added. “It is difficult to say when the DEIR will be published because it is still going through the review process.”

Kristopher Larson, president and CEO of the Hollywood Partnership, the nonprofit organization which manages the Hollywood Entertainment District property business improvement district, characterized the area as particularly desirable noting that accessibility is “one of the best kept secrets of Hollywood.”

“The proposed project is the only significant office project within the central part of the Hollywood Entertainment District BID, and when completed, will innervate the area with hundreds of skilled workers to better support our retail economy,” Larson said. “Today, 79% of all of the creative industry jobs located within [Council District] 13 are located in Hollywood, so the project presents the opportunity to expand upon that economic cluster. Moreover, it will help to knit together a somewhat disjointed block and help continue the wonderful pedestrian scale of Cahuenga north beyond Hollywood Boulevard.”

On the National Register of Historic Places since 1983, the Security Pacific Bank Building was designed by John Parkinson and Donald B. Parkinson, the same architects who designed Bullocks-Wilshire, Union Station and the Memorial Coliseum. As detailed in the renderings, the former bank building is envisioned as becoming the home of a chic retailer on the corner. Renderings show the retail theme continuing north along Cahuenga Boulevard, with bicycle parking and regular parking meters. The plans also have two restaurants fronting Cahuenga Boulevard as part of the new office building on the ground floor.

As detailed on the application, the new building will feature neutral-colored glass with a white ceramic pattern and matte-gray colored aluminum. Grey basalt natural stone provides some differentiation on the ground level.

The proposed building’s total height ultimately extends to 232 feet to cover the mechanical equipment, with the rooftop set at 213 feet.

According to the city, the site is located within the Alquist-Priolo Earthquake Fault Zone, and as such, the project is required to undergo a fault investigation. In the event of active fault traces, the L.A. Department of Building and Safety recommends a default building setback from an active fault of 50 feet.

With views of the Hollywood hills and entrances next to the Walk of Fame, the destination has historically been busy. It is also two blocks from Metro’s Red Line station at Hollywood/Vine.

According to the plan submitted to the city, the project is proposing the construction of 858 total parking spaces, even though a total of 570 are required. There is also bicycle parking for 69 bikes.

Onni did not respond to multiple requests for comment on the project or a request to facilitate an interview with the project architect, Solomon Cordwell Buenz.