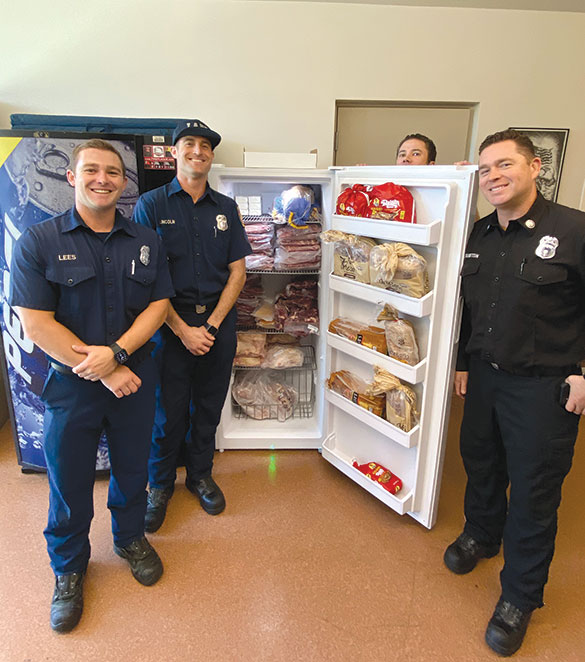 The “Firehouse Freezers” program is an expansion of the foundation’s “Firehouse Dinners” initiative, which ensures firefighters have healthy food to cook and eat during long shifts on duty. The idea to supply freezers came from a desire to help reduce the amount of time firefighters spend on grocery shopping by increasing their capacity to store frozen foods.

The First-In Fire Foundation has received a commitment from Television City and owner Hackman Capital Partners to sustain the “Firehouse Freezers” program and deliver more freezers. The foundation is seeking support from other entities and individuals to expand the program further. Olympia Medical Center has also donated a freezer for LAFD Fire Station 34.

“Our firefighters put their lives on the line for the safety of all Californians,” said Michael Hackman, founder and CEO of Hackman Capital Partners. “Fire-In Fire Foundation provides a critical service to these unsung heroes and we’re proud to help advance such a worthwhile cause.”

Lyn MacEwen Cohen, President of the First-In Fire Foundation, said the program is sorely needed and comes at a difficult time for firefighters, particularly during the pandemic and with recent wildfires. The foundation advocates for disaster preparedness and the expansion of the program coincided with National Emergency Preparedness Month in September.

The “Firehouse Dinners” program was launched last spring with initial support from Los Angeles City Councilman David Ryu, 4th District, and merchants at the Original Farmers Market. The foundation served as a liaison between the community and fire department, coordinating the purchase of meats and produce from market merchants and delivery to fire stations. The Farmers Market also contributed Firefighter Family Emergency Preparedness Tote Bags to LAFD Station 61 at 5821 W. Third St.

“We will get through this with a preparedness mindset. We can look to the history of the American spirit to see that when America is confronted with calamity, whether 9/11, World War II, [the] 1918 flu or the current COVID crisis, our resilience grows stronger,” Cohen said. “With preparedness, we are stronger together. When we help each other for the good of us all, emergency preparedness becomes patriotic.”

“I don’t think there’s ever been a better time to get prepared. Everyone has a stake in keeping our community safe,” Ryu added.

The Wallis spotlights artists this fall