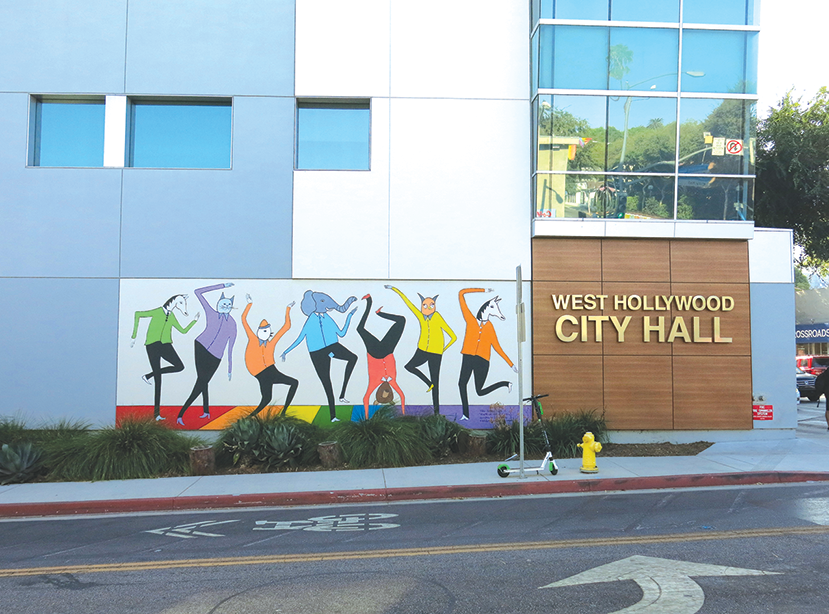 The West Hollywood City Council was split on a proposal to limit council members in bringing forward items to benefit organizations that endorse candidates. (photo by Cameron Kiszla)

A West Hollywood City Council discussion of assistance for renters turned into allegations of politically motivated actions and impropriety on Oct. 19.

The discussion spanned a pair of separate – though related – items, beginning with a potential $60,000 contract for the Coalition for Economic Survival to provide advice, assistance and outreach to tenants in the city regarding their rights and options during the pandemic and its aftermath.

In a unanimous vote, that contract was not ratified, and instead, the council members will allocate funding for city staff to meet any unmet needs of renters as part of next month’s reauthorization of the urgency ordinance related to COVID-19.

“This sounds like a duplication of things that are already being done by the Alliance for Housing and Healing, by the National Council of Jewish Women and most recently, by us funding attorneys through Bet Tzedek,” Councilman John Duran said.

The larger issue with the CES contract, however, was that Mayor Pro Tempore John Heilman had initially supported bringing the contract before the council for a vote. CES endorsed Heilman in his bid for reelection on Nov. 3.

The council’s second item was a potential limitation on City Council members from bringing forward items that would have the city provide funds or in-kind services to organizations that endorse City Council candidates, at least for a period of time near an election.

Councilman John D’Amico said the discussion was an important one, and he “flipped out” when he saw that Heilman had initially put his name on the time in the agenda, adding that he “was shocked” and “I threw up in my mouth, it made me so sick to my stomach.” Heilman removed his name from the item before the meeting began.

“It was such a problem that one of the people who wrote it took his name off of it because he didn’t want it to appear improper, and it did appear improper. It is improper to send $60,000 to somebody who just endorsed you,” D’Amico said.

Heilman said that Horvath asked him to join in bringing the item for council consideration, but he removed his name from the item after concerns were raised, and he “didn’t want to give that appearance or create an issue for people.”

Councilwoman Lauren Meister said she had been working on the second item for the past few months.

“I thought I’d hold off until after the election, but then it seemed that it was more appropriate to bring it forward,” Meister said.

Meister and D’Amico were joined by Duran in a 3-2 vote asking city staff to draft a policy for city sponsorship of events and organizations when the organizations, their political action committees or their board members make endorsements in City Council elections.

D’Amico and Meister proposed that the endorsed council member would not be able to bring forth motions that would benefit their endorsed organizations for a period of six or nine months after the election, though city staff could bring forward such items for council consideration.

Duran supported the motion on more ideological grounds, saying that while he believes issue-based events and organizations are fine, explicitly political groups – such as those in support of a party or candidate – should not be allowed, as doing so would open the door to representatives from groups with which the city may not agree.

“In my mind, the partisan organizations should not be allowed to use our facilities at all because they directly engage in candidates, campaigns and electioneering. I’ve watched it, you’ve watched it, we’ve all watched it … I don’t think it’s a rightful use of our public facilities or our public dollars to assist partisan organizations, whether they be Democrat or Republican,” Duran said.

Heilman and Mayor Lindsey Horvath voted against the plan. Heilman added that he has been a proponent of CES since before West Hollywood incorporated in 1984, but he didn’t think it warranted his recusal, as “I don’t get any financial benefit from this.”

“I don’t think anyone would be surprised to know that I would support [this] item, but I didn’t want to create an issue for anyone,” Heilman said.

D’Amico took issue with the timing, saying it “just smells sort of bad” to have Heilman support awarding a contract to CES when he received the organization’s endorsement.

“To do it now in the middle of an election, when we’re going to send them $60,000 and then they’re going to send out a mailer telling us to vote for two candidates who are supported by the two people who wrote [the motion to award CES a contract], that just doesn’t smell right,” D’Amico said. “I’m not saying that is going to happen, but it’s quacking, and I can’t help but think it’s a duck.”

D’Amico also argued that endorsements “have value because clubs send out mailers which can cost now $10,000, $15,000 or $20,000,” which could constitute a financial benefit for Heilman in this case.

“That’s actual value. An endorsement in an email from an organization to its 50,000 members has a value,” he added.

Horvath said while she was open to “tak[ing] a look to see if there are things we can do to clean up our policy and our process,” the motion considered on Oct. 19 was “very restrictive, seems to be very specific and potentially damaging to services and resources that the city’s residents have come to count on.”

That argument was also made during public comment by Genevieve Morrill, president and CEO of the West Hollywood Chamber of Commerce, and representatives of the Hollywood Chapter of the National Organization for Women and the Stonewall Democrats, all of whom worried their programs and events with the city could be put in jeopardy if changes aren’t made to the proposed rule.

Horvath, Heilman and some public commenters also alleged that there were political motivations at play in the timing and substance of the proposal.

“I checked in with the city attorney to see if there were any reports of impropriety that were being investigated; there are none,” Horvath said. “There are no questions currently in place about those kinds of things, so I’m not saying that it isn’t worth the effort to have this conversation. I’m glad we’re having the conversation, but I can’t support something that has unintended consequences, is overly broad or hasn’t been fully thought through that will ultimately be to the detriment of the community.”

D’Amico argued that the CES item was evidence enough that changes are necessary, and he added that he was not asking long-running and established programs to end. Instead, he said, this would simply temporarily prevent council members who benefit from endorsements from attempting to secure sponsorships and contracts for the organizations that support them.

Duran, the swing vote on the matter, said that he agrees some political factors may be in play, but the item is important enough to be considered when city staff returns to council with a proposal.

“I agree, this is all campaign silliness, and in two weeks, it will all be over, but I still think it’s worth revisiting the policy on the use of our taxpayer dollars in public facilities,” Duran said.