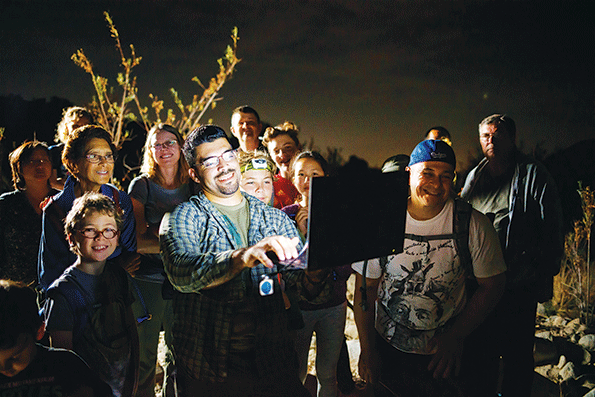 The Natural History Museums of Los Angeles County announced that Community Science Program Manager Miguel Ordeñana has been named a Disney Conservation Fund grant recipient. Ordeñana was selected for his work to save wildlife, protect habitats and inspire community conservation in Los Angeles with the Backyard Bat Survey.

The two organizations are committed to conserving urban sensitive species such as the western red bat, southern yellow bat, western mastiff bat, hoary bat and small-footed myotis, which have already been detected through the study.

“We are grateful for the continued support of the Disney Conservation Fund, which makes it possible for us to expand current bat research and education initiatives in addition to tackling new questions, such as where are they roosting, that put us in a better position to inform conservation action and policy,” Ordeñana said.

“More specifically, the grant will allow us to continue using innovative acoustic technology that records species-specific bat echolocations, and allows us to team up with more families, schools, parks and now libraries,” he added.

With the additional funding provided by Disney Conservation grant, the museum will also partner with residents in underrepresented neighborhoods of L.A. County to track and record bat activity through community science-based acoustic monitoring and roost mapping, continuing the first large-scale study of bats in urban and suburban habitats to inform the Backyard Bat Survey. Community science is a discipline that engages volunteers from the public to advance real scientific projects.

By studying and monitoring the local bat species, thousands of city dwellers will not only provide essential data for conservation focused policy decisions, but they will also be inspired to become stewards of their environment, according to the museum.

“We are so grateful to receive the Disney Conservation Fund grant in support of our own Miguel Ordeñana’s project to expand the research of hibernating and roosting behavior of L.A. bats,” said Dr. Lori Bettison-Varga, president and director of the museum.

According to the museum, the Backyard Bat Survey is creating inclusive community engagement strategies and foundational scientific knowledge upon which all future Los Angeles bat studies can build. Working with community scientists, project researchers confirmed the presence of seven bat species in L.A.’s urban core this past year, with analysis suggesting the possibility of an additional two species.

“These discoveries confirm the project hypothesis that highly urban regions of Los Angeles, such as South L.A., are not devoid of nature as commonly thought, but are instead rich in bat activity which is a positive indicator of ecosystem health,” stated a release issued by the Natural History Museum.