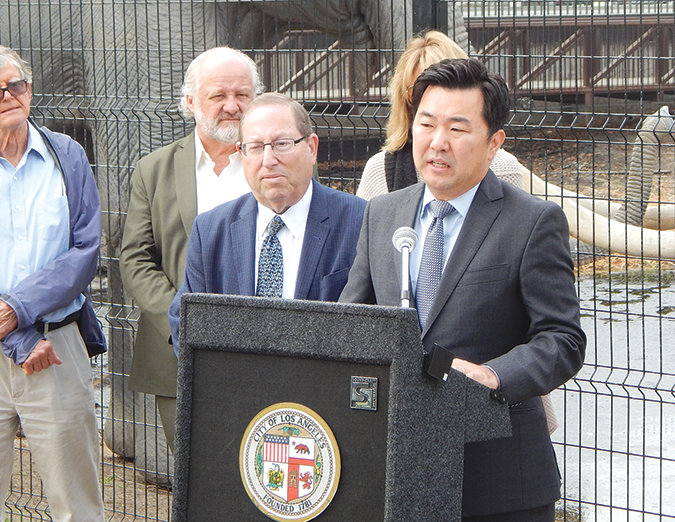 Councilmen David Ryu, right, and Paul Koretz have partnered on multiple initiatives to improve the environment. (photo by Edwin Folven)

Joining the campaign will commit the city to conserving 30% of its land for open space and conservation by 2030 in an effort to combat climate change.

“Climate change is an international crisis, and we need to take bold, collaborative action to effectively turn the tides,” Ryu said. “The scientific community has made it clear: in order to stop the extinction and climate crises we’re currently experiencing, we need to conserve more of our lands and waters than we currently are. This legislation would set a clear and achievable goal, and one that is a necessary step towards meeting our long term climate goals.”

“Seventy years ago, Aldo Leopold called for a new land ethic, a moral responsibility to include in our definition of ‘community’ not only humans, but animals, plants, waters and soils. We now face global biodiversity collapse if we do not quickly and actively heed Leopold’s sage advice,” Koretz said. “I am so pleased to partner with Councilmember Ryu to aim for adding another essential piece to the city’s growing biodiversity tool belt: officially preserving at least 30% of our land for the natural world which sustains us all.”

One motion instructs city departments to report back on the feasibility of Los Angeles independently joining the 30 by 30 conservation campaign. The second seeks a citywide resolution in support of any legislative or administrative action that would protect 30% of land and waters for open space and conservation.

On Oct. 7, Gov. Gavin Newsom signed an executive order setting a goal of conserving at least 30% of California’s land and coastal waters by 2030, making the state the first state to join 38 countries that had made similar commitments. It is estimated that nationwide, 14% of the land and 12% of marine area is currently protected.

Time is right for new leadership in WeHo