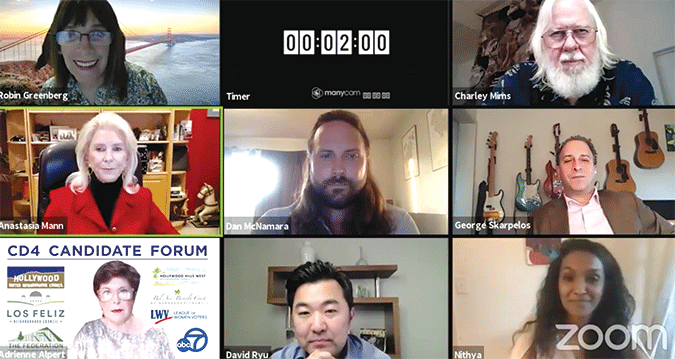 Incumbent David Ryu and challenger Nithya Raman appeared in another forum on Oct. 2 in the race for the Los Angeles City Council’s 4th District.

The forum was hosted by the Hollywood Hills West Neighborhood Council in conjunction with the Hollywood United, Bel Air-Beverly Crest and Los Feliz neighborhood councils, as well as the Federation of Hillside and Canyon Associations, and League of Women Voters of Los Angeles. Adrienne Alpert of ABC7 Eyewitness News moderated the forum, which focused on issues such as homelessness, public safety, traffic and civic engagement.

Ryu has served the 4th District since being elected in 2015. He is facing urban planner Raman, a former member of the Silver Lake Neighborhood Council and co-founder of SELAH, a grassroots organization addressing homelessness in the Silver Lake, Echo Park, Los Feliz, Atwater Village and Hollywood communities.

Ryu started the discussion by outlining his experience, priorities and approach to city government.

“Five years ago, we took on the establishment at City Hall with a simple idea: community voices and community needs should come first. So I refused developer contributions, a pledge that I hold to this day. And I centered my campaign on the needs of everyday Angelenos. No one thought I could win, but David beat Goliath and we brought real change to City Hall,” Ryu said. “But as you all know, we just got started. I look forward to continuing our work together when it comes to anti-corruption reform, homelessness, working on racial equity and making sure all of our neighborhoods get the services they deserve.”

Raman said her background in urban planning gives her the experience necessary to find new key solutions to issues such as homelessness.

“I have worked on urban poverty issues for pretty much my entire career. I spent the first part of my career in India, working with people who lived in slums and informal settlements fighting for things like running water, for toilets, for land rights, for better working conditions. And here in Los Angeles, both briefly at City Hall (as a city administrative officer) and in my own neighborhood as a member of my neighborhood council’s homeless committee, in fact as its co-chair for a number of years, and as a co-founder of a very active volunteer-run homeless coalition in my neighborhood, I have tackled the issue of rising homelessness in this part of the city,” Raman said. “What I bring to this work is a thing I think I have demonstrated throughout my entire career, which is a passion for solving big problems, a focus on issues facing the most vulnerable residents, a commitment to addressing those issues by building community and collaborating. Whether in my work in India or my work here in L.A., we have brought so many people together to think about these big problems and to work together in solving them.”

The candidates were also asked about the city’s response to the COVID-19 pandemic. Raman said it is important to address residents’ needs while supporting businesses so they are prepared for recovery when the pandemic ends.

“I think the city can be doing a lot to address issues that are resulting from the pandemic. I think we could be doing more to make sure residents are stable in their homes, especially those who have lost work as a result of the pandemic and are facing potential eviction at the end of it. I think we could be doing a lot to shore up small businesses during this time, and I believe that we have a lot of the funding that we need to do these things from CARES Act money. What I would like to see is to make sure that money is being spent effectively and efficiently to benefit residents as quickly as possible,” Raman said. “We could be doing a better job of making it clear who is eligible for this funding, exploiting every possible source of funding to make sure we are getting it to residents and businesses for them to be able to stay afloat, stay in their homes, stay open.”

Ryu touted his experience in city leadership during the COVID-19 pandemic. He also called for more federal assistance, explaining that CARES Act funding is limited to what it can be used for and the government must “step up” to ensure a swift recovery.

“This moment requires leadership and experience, and I have proven that I can do the job. This is not a hypothetical question for me, this is what I have already done,” Ryu said. “When the pandemic hit, I didn’t wait. I sprung into action. I secured the first 20,000 test kits for Los Angeles by bringing city, county and the private sector together. I led the charge in getting PPEs to our nurses and our frontline workers. I launched volunteer programs for our seniors. I launched loan and grant programming with the Jewish Free Loan Association. I moved to disperse close to $1 million in discretionary funds to nonprofits. I fought for the freezing of rent increases to provide protections to renters now, which is now law. And I have also pushed through … [an] eviction moratorium as well as asking for rent and mortgage forgiveness. I created an artist relief fund, [and] created COVID-19 town halls for every neighborhood to make sure everyone knew about all these resources available.”

Ryu and Raman were also asked about homelessness and what the city should do to address the issue that it is currently not being done.

“What we need is a FEMA-like approach. This is something I have been advocating for the past two years now. Homelessness is not a Skid Row issue or a Venice Beach issue or a Hollywood issue; it is a city of L.A. issue, and it needs to be approached as such,” Ryu said. “We are not treating it as a citywide approach and we are not treating it like the humanitarian crisis that it is. This is why I have introduced plans for a FEMA-like response to meet this crisis head on with the speed and skill that it requires.”

“We need to do two kinds of things differently in our response to homelessness. The first is in how we deliver services. For years in Los Angeles, even now, the primary point of contact between those experiencing homelessness and the city is the LAPD. We spend hundreds of millions of dollars policing homelessness and putting unhoused individuals in jail for crimes that one would hardly consider crimes. I think if we were to restructure that spending and respond with an outreach and services-first response … we would see significantly better results than what we are seeing right now,” Raman said. “The second thing is that we have been spending a lot more money in recent years on building shelters and building housing, but we’ve spent way too much money for way too few units. I think we could be looking to very successful programs like those under the Housing for Health program where we take city dollars [and] partner with nonprofits who can often get shelter beds, housing units and shared housing facilities online much faster and much more efficiently than the city has done.”

Ryu added that creating more permanent supportive housing coupled with bridge housing and shelters is the best approach because people are experiencing homelessness for different reasons. Raman added that more needs to be done to ensure every unit is being constructed as efficiently as possible, freeing up money to build even more housing.

“I think people have been struggling with a few different things. One, they have been struggling with traffic issues. There has been a lot of increase in traffic related to events happening at the Hollywood Bowl, cut-through traffic due particularly to the use of apps like Waze and Google Maps. To me, the traffic and transportation issue is a solvable issue. I think it requires better communication with the people at the bowl who are holding these events and for the city to be a stronger partner in negotiating with companies like Google and Waze in terms of our data-sharing agreements to keep some of these smaller streets off of their maps,” Raman said.

“I want to focus on one issue that really affects hillside communities, and it boils down to public safety, in particular, as we are still in fire season: fire safety,” Ryu said. “I introduced recent legislation for us to stop construction in the hills. If we are able to ban metal weed-whackers because we are afraid that a spark could have a whole hillside go up in flames, then why are we not scared of all the power tools and everything that’s going on in the construction zones now? In the hills, when it comes to fire safety, it’s all around. Tourism affects it when you have lots of tourists smoking or not obeying and following the guidelines given to them. I have banned party houses as much as possible, but we have to go further. That’s why I have the motion to halt all development on hillsides during fire season, as well as expanding the hillside construction regulation zone to all hillsides. We do not want to wait for a disaster to happen in our hills.”

The candidates also both stressed that they do not support a proposal to build an aerial tram in Griffith Park that would take people to the Hollywood Sign. Raman called it “expensive” and “inefficient,” while Ryu referred to it as a “pie-in-the-sky” idea.

The candidates also considered neighborhood issues pertaining to the individual communities and opined on the merits of larger changes such as changes to policing and public safety. Both agreed major alterations are needed to public-safety policy and vowed to follow through on making necessary changes.

When asked about the most important thing that should be changed in city government, the candidates offered divergent opinions. Ryu said there needs to be public campaign financing in city elections and more transparency at City Hall.

“Everything begins with trust. That’s why five years ago, the two issues I ran on, my platform’s signature issues, were homelessness … and anti-corruption. I was sick and tired of what was going on at City Hall,” Ryu said, adding that he has called for an independent office of inspector general for land use matters and an end to behested payments to candidates. “Is this going to solve everything? No. But it’s going to surely begin [the process]. We changed the way business is done in City Hall, and I won’t stop now.”

Raman added that she remains committed to improving the 4th District and solving persistent problems. She added that she supports increasing transparency in public elections and wants to study the best ways to address public safety. Raman also said she is grateful for her supporters and the ability to wage a campaign focused on community involvement.

“This has been such an honor to run for this seat and the kind of campaign we have built has exceeded my wildest imagination for how we could see civic engagement in a city like Los Angeles,” Raman said. “I said this before but I want to say it again. The next steps for Los Angeles are going to be challenging steps and the only way we will be able to address those problems is if we all come together. The kind of volunteer engagement and engagement that our campaign has seen has been so inspiring.”