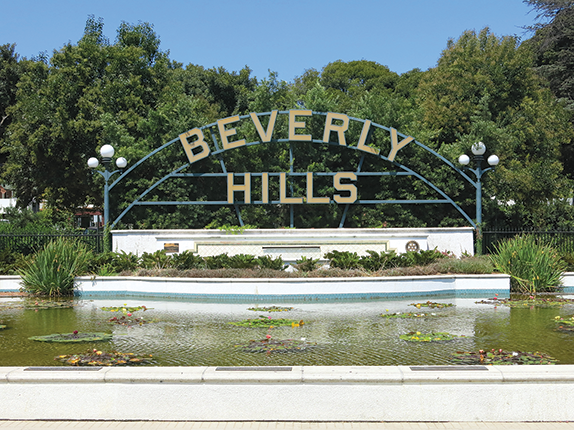 Regardless of who is declared the winner in the upcoming Nov. 3 presidential election, Beverly Hills police say they are ready to handle any upcoming demonstrations and potential civil unrest.

“I would say we’re the most prepared in Los Angeles County. I would even say the state, and I would venture to say the whole nation,” Beverly Hills Police Lt. Max Subin said in anticipation of the election. “You will see an incredible police presence on the streets of Beverly Hills from [Oct.] 31 on for the whole week. There’s going to be an overwhelming presence on the streets for a whole week of police officers and security guards.”

“We’re fully prepared and we will protect the entire city as we have in the past,” Rivetti said.

For seven days, BHPD plans to require the full deployment of sworn and non-sworn staff – a total of 135 BHPD officers – to work rotating 12-hour shifts. In addition, the city is contracting with the Santa Paula Police Department to provide a SWAT team of 10 officers and two sergeants for 12-hour daily shifts.

The city also plans to further supplement law enforcement services with private security from Nastec International Inc. and Covered 6 to provide 80 additional private armed security guards during election week. In addition, the city will activate its Emergency Operations Center from 11 a.m. to 11 p.m. (longer if needed), in addition to potentially activating partnerships with the Los Angeles County District Attorney’s Office as well as federal agencies. Rivetti previously said that the city would also be availing itself, as needed, to its mutual aid contract with the cities of Santa Monica, Culver City and West Hollywood, in addition to UCLA.

Starting on Election Day and continuing through Nov. 4 Rodeo Drive will be closed from South Santa Monica Boulevard all the way to Wilshire Boulevard, as well as along Brighton Way and Dayton Way.

“It’s a hard closure – no pedestrians, no vehicular traffic,” Subin said. “There’s also going to be different barricades and bike racks around the area in case we have to close off the district.”

While not mandating that businesses board up, Subin said that police are “encouraging everyone to harden the target.”

“We are preparing for the worst, but we hope that everything will remain peaceful,” he said.

Police aren’t mandating residents to remain home; however, Subin said that the BHPD is requesting that everyone ensure that windows are closed and doors are locked.

“The community should feel very prepared that their police department and the city has prepared as much as they can,” he said, underscoring that it’s been a citywide preparedness effort which has included support from Public Works, Community Development and significant outreach to businesses and residences. “Everyone is concerned because we never want a repeat of what occurred on May 30.”

Since the protests began at the end of May after the death of George Floyd in Minneapolis, protest activity in Beverly Hills has continued with a variety of demonstrations, many in support of Black Lives Matter. Last Saturday’s pro-Trump protest had over 2,500 people in attendance according to Subin – the largest to date. Earlier this month, the City Council approved spending an additional $3.3 million on public safety measures and protest expenditures.

Rivetti underscored that many of the participants at last Saturday’s protest were not wearing face coverings – a mandate in the city of Beverly Hills and one of the key methods in the fight to curb the spread of COVID-19.

“In this particular group, it’s part of their platform (to not wear face coverings),” he explained of the members of the USA Freedom Rally.

“It’s become a political symbol as much as it is a health issue. The politicizing of the face mask is really unfortunate,” Councilman John Mirisch said.

Following Rivetti’s presentation, Councilwoman Lili Bosse inquired about covering the iconic Beverly Hills sign. After hearing consensus among council members to cover the sign as well as other public artworks, the city is preparing to take the requisite protective measures.

Councilman Julian Gold, like his colleagues on the virtual dais, expressed his appreciation for all the hard work BHPD has been doing as well as the other city departments to ensure the city remains safe.

“Maybe the end’s in sight. Maybe not,” he said.