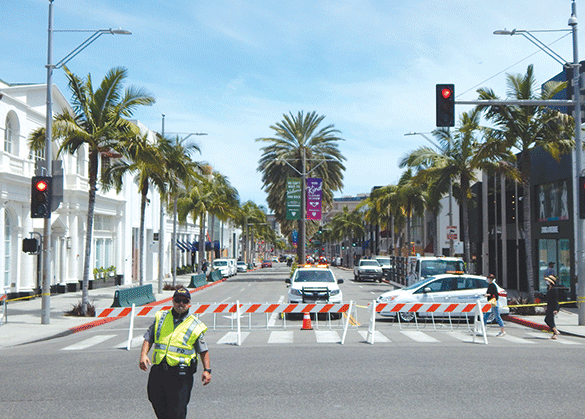 Beverly Hills must spend more money to protect the city in the wake of continued protests. (photo by Edwin Folven)

Beverly Hills will have to reallocate funds and draw from its reserves to pay for public-safety expenditures arising from the recent protests, civil unrest and the pandemic.

“I think it’s unfortunate that we find ourselves needing to do this, but we are fortunate in the fact that we can afford to do this. And as our primary goal is keeping our community safe, I believe we have no choice but to do this, so I’m fully supportive of this,” Councilman Julian Gold said.

“We do consider these to be one-time needs,” Director of Finance Jeff Muir said.

In getting an update about public-safety expenditures related to the ongoing protests and the need for enhanced safety measures, the council learned that the city had spent roughly $1.9 million in COVID-related expenditures as of June 30. Based on early estimates provided by city departments, on March 16 the council approved an initial appropriation of $1.7 million for the pandemic response. City departments now estimate they will need $2 million more for additional COVID-related expenditures from July 1 through Dec. 31.

According to the staff report, the city has or will receive an estimated $700,000 in federal funding for COVID-related expenditures, as well as an estimated $200,000 reimbursement from FEMA for March, April and May.

Since the protests began at the end of May after the death of George Floyd in Minneapolis, protest activity in Beverly Hills has continued.

Interim Police Chief Dominick Rivetti highlighted the unique challenges that have faced the BHPD in the previous seven months.

“It started with COVID-19 in March, then we had the civil unrest beginning in late May, and continuing all through the summer and up until today, and it appears it’s going into the future. Also, we’ve had increased crime challenges such as the EDD fraud and the other issues with increasing homeless and the mentally ill and just a broken criminal justice system,” he said.

In anticipation of continued protest activity, along with the heightened concerns around the upcoming election and other expected challenges, the city will need an additional $1.3 million in expenditures through Dec. 31 to further support its Emergency Operations Center, which was not anticipated in the previous budget.

Protest-related expenditures in the amount $1.8 million for fiscal year 2019-20 were able to be absorbed by various departments’ budgets. However, going forward, the city will need more money to dedicate for public safety, particularly during the upcoming Nov. 3 presidential election and the subsequent weeks, according to the staff report. The report further noted that BHPD is currently planning for multiple protests and potential civil unrest during election week and the weeks following.

“We are going to place safety of the entire community first and do so in a way that of course respects the rights of people to protest and express their Constitutional rights,” City Councilman John Mirisch said.

Beginning Oct. 31, BHPD plans to require the full deployment of sworn and non-sworn staff to work rotating 12-hour shifts. The shift schedule is anticipated to result in increased overtime costs of approximately $2.1 million for three weeks and up to approximately $2.8 million for four weeks.

In addition, the city will pay approximately $140,000 a week for the Santa Paula Police Department to provide 10 officers and two sergeants for 12-hour daily shifts. Including hotel accommodations and parking, the city manager is preparing to execute an agreement for up to five weeks for this supplemental staffing, for an amount not to exceed almost $700,000.

At the recommendation of Rivetti, the city also plans to further supplement law enforcement services with private security from Nastec International, Inc. and Covered 6 for additional support during election week and supplemental security in the Business Triangle, which is estimated to cost around $1.4 million.

Rivetti advocated for the City Council to approve the hiring of additional police officers beyond the 145 officers authorized to staff the department. There are currently 10 vacancies and Rivetti wants to use the opportunity to hire five additional, bringing the total to 150 officers on the force.

“The challenges facing this city and this department over this last year have greatly increased and as we look forward, we don’t see any end to that,” he said. “It will help us maintain the quality of safety and the level of service that the public is used to getting from the police department.”

In response to a question by Councilwoman Lili Bosse involving the hiring process, Rivetti said that it generally takes the department eight to 10 months to train a lateral hire and 18 months to train a new hire.

“We’re trying to seize the opportunity of hiring some very, very qualified people that are looking to come to Beverly Hills for a career,” he said.

In addition, Rivetti said the city would be availing itself, as needed, to its mutual aid contract with the cities of Santa Monica, Culver City and West Hollywood, in addition to UCLA, as well as working with the FBI and the U.S. Marshals Fugitive Task Force and other resources.

“Our plan is to protect the entire city. I believe we have a plan in place that does that,” he said.