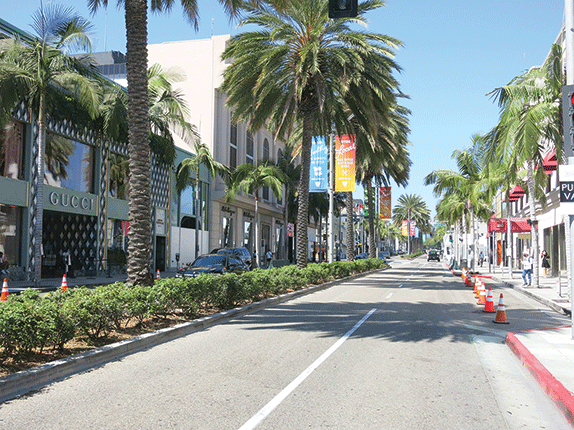 The Beverly Hills City Council unanimously backed strengthening crime laws in passing a resolution to support Proposition 20 last month. The upcoming ballot proposition regarding criminal sentencing, parole and DNA collection is one of 12 California measures that voters will decide in the upcoming Nov. 3 election and the only one on which the city has taken a position.

“Prop. 20 is really designed to try to … take the things that are truly violent crimes and reclassify them as violent crimes to rebalance what was an overreach on the part of the state,” said Councilman Julian Gold, the only member of the council to articulate his support. “If you want to do something to reduce crime in our community, this is really important.”

The Beverly Hills City Council supported a similar measure in 2018, which never never made it on the ballot.

According to the staff report, which was authored by Beverly Hills Policy and Management Analyst Cynthia Owens, “the anticipated reduction in crime resulting from the passage of Proposition 20 will have an unknown positive impact to the city and the community.”

The initiative, as codified in the proposed law, amends and adds sections to the Penal Code in an effort to “fix three related problems created by recent laws that have threatened the public safety of Californians and their children from violent criminals.”

The text of the proposed law states that the measure will: “Reform the parole system so violent felons are not released early from prison, strengthen oversight of postrelease community supervision, and tighten penalties for violations of terms of postrelease community supervision; Reform theft laws to restore accountability for serial thieves and organized theft rings; and Expand DNA collection from persons convicted of drug, theft, and domestic violence related crimes to help solve violent crimes and exonerate the innocent.”

The voter-sponsored initiative was submitted by Nina Salarno Besselman, president of Crime Victims United. According to Ballotpedia, 365,880 verified signatures were required to qualify for the ballot. Of the 12 measures on the November ballot, half qualified via the ballot initiative process. According to California Attorney General Xavier Becerra’s office, under California law, the attorney general “issues official titles and summaries describing the chief purpose and points of every proposed initiative submitted in compliance with procedural requirements,” but doesn’t endorse specific ballot initiatives.

“The changes enacted by Assembly Bill 109 (2011), Proposition 47 (2014) and Proposition 57 (2016) have created a situation where violent and career criminals are serving little to no prison time, which has eroded the safety of almost every community in California,” states the Beverly Hills staff report.

In addition to closing a loophole in the state parole system that was created by AB 109 that eliminated a return to prison for parole violators, she said that Prop. 20 has four major provisions. Those include reclassifying certain crimes that under Prop. 57 qualify as nonviolent crimes; reforming theft laws including revising the theft threshold by adding a felony for serial theft when a person is caught for the third time stealing above $250 in value; reforming the parole system to, among other changes, stop the early release of violent felons and expand parolee oversight; and reinstating DNA collection for certain crimes that were reduced to misdemeanors as part of Proposition 47.

“The most important thing is that in the state of California there are a number of crimes that are classified as nonviolent, like rape of an unconscious person, pimping a child for sex and domestic violence. California currently considers those nonviolent, and they shouldn’t be. So those people that commit those crimes are eligible for early release under Prop. 57, and I don’t think that people who voted for Prop. 57 knew that at the time. So this fixes that. That’s one of the biggest things,” Crime Victims United Campaign Coordinator Kelli Reid said.

Under Prop. 57, people incarcerated for crime that is classified as violent are not eligible for early release.

While the language in the proposed law corroborates Reid’s assertion, local criminal defense attorney Richard Kaplan said that it is actually a “misstatement of the law” and “a step backwards.”

“This is trying to fix a problem that I don’t think exists,” Kaplan said, noting that people are primarily getting released earlier on minor crimes that are predominantly theft-related.

“It’s extremely costly and even gives the Bureau of Prisons a responsibility to decide when releasing somebody, ‘How is their attitude?’ And if you start having to interview … that’s putting a lot of pressure and time constraints on an already strapped Bureau of Prisons,” added Kaplan, a former president of the Beverly Hills Bar Association. “This is an extremely expensive ballot measure that doesn’t seem to address an issue that really exists.”

The proposed law specifically states that “recent changes to parole laws allowed the early release of dangerous criminals by the law’s failure to define certain crimes as ‘violent.’ These changes allowed individuals convicted of sex trafficking of children, rape of an unconscious person, felony assault with a deadly weapon, battery on a police officer or firefighter, and felony domestic violence to be considered ‘non-violent offenders.’”

Ana Zamora, director of criminal justice reform at the Chan Zuckerberg Initiative, which has donated $1.25 million to defeat the proposition, told the Park Labrea News and Beverly Press that authorizing new felonies for petty crimes and cutting access to rehabilitation programs in prison will bring about a return to California’s “failed ‘tough on crime’ days.”

“If passed, more people will be sent to prison, rehabilitation programs will be slashed and taxpayers will pay the price,” she said. “In the pandemic environment especially, when we see COVID-19 sweeping through overcrowded prisons and people are dying, it is both irrational and cruel to pass new laws sending more people away.”

“This does put the so-called third strikes back on the books,” Owens said just before the September Beverly Hills City Council meeting. “The council just really wants to make sure we have a safe community.”