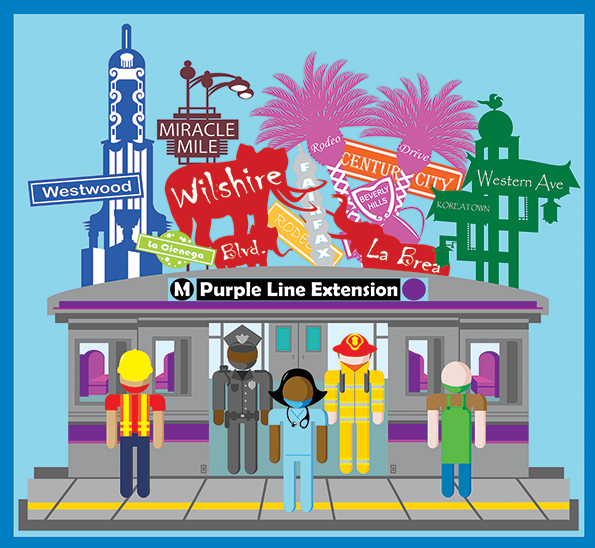 The Los Angeles County Metropolitan Transportation Authority has selected the winners of the art and naming contest for the third and final set of tunnel boring machines that are part of the Purple Line Extension project. The two machines will excavate the tunnels between Westwood and Century City starting in early 2021.

The names “Aura” and “Iris” were chosen from entries submitted by U.S. veterans and Veterans Affairs employees, as well as UCLA students, alumni and employees. Derik De Baun, a 2006 UCLA alumni, chose the name “Aura,” which is Latin for gold. According to De Baun, Aura is reminiscent of gold because it resembles one of the primary official colors for UCLA as well as a color on the seal for the VA. Additionally, athletes from around the world will be competing for gold when the subway extension is completed in time for the 2028 Olympic and Paralympic Games in Los Angeles.

Clair O’Hanlon, a Veterans Affairs advanced fellow in health services research, won for the name “Iris.” O’Hanlon chose the name in tribute to Iris Critchell, a living veteran and Angeleno who flew military aircraft during World War II with the Women Airforce Service Pilots. During her military career, Critchell was an internationally recognized flight instructor and aeronautics and aviation educator. Earlier in her life, she also represented the United States in swimming at the 1936 Olympic Games in Berlin.

“Aura and Iris are two of our newest Angelenos – each of them tributes to our ambitious transit vision, our resilient spirit and our unyielding focus on building more connected communities and a stronger future,” Metro Board Chair and Los Angeles Mayor Eric Garcetti said. “Our region’s recovery from the COVID-19 crisis will reshape our economy for generations to come, and these two tunneling machines will help us reimagine our city as a more sustainable, prosperous and equitable home for all.”

Metro opened its contest for art and naming submissions on April 30. The public voted for submitted entries in August. Nearly 8,100 votes were received for all contest entries. Winners were chosen based on originality and community significance.

“With the arrival of this final set of [tunnel boring machines], we are now on track to deliver the Purple Line Extension as quickly as possible,” Metro CEO Phillip A. Washington said. “Angelenos will soon have a new high-speed, high-capacity transit alternative primarily running along Wilshire Boulevard. It will greatly improve mobility for everyone traveling on our county’s public transit system.”

Metro has now received the cutterhead and shield for its tunnel boring machines, which are now staged at Metro’s Veterans Affairs construction yard in Westwood. The third section of the Purple Line Extension Project spans 2.56 miles and includes two new stations at Westwood/UCLA and Westwood/VA. The final section of the project is expected to open in 2027.

A trip to Provence: Clicking your heels twice at Le Jardin