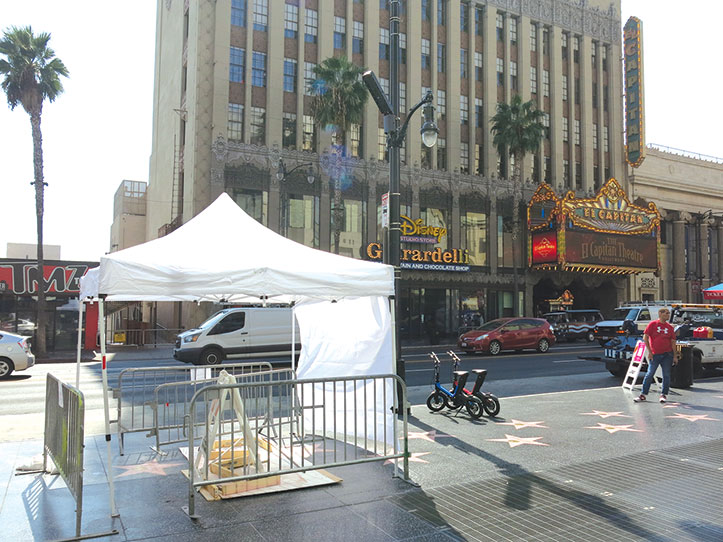 A barricade was placed around the star belonging to President Donald Trump on the Hollywood Walk of Fame after it was vandalized last Friday. Repairs have been ordered. (photo by Cameron Kiszla)

For a second time, the same male suspect has been arrested for allegedly vandalizing the star belonging to President Donald Trump on the Hollywood Walk of Fame.

James Lambert Otis, 56, turned himself in on Oct. 5 at the Los Angeles Police Department’s Hollywood Division after investigators identified him as the individual who allegedly damaged the star shortly before 6 a.m. on Oct. 2.

The suspect allegedly used a pickax to damage the star while dressed as the Hulk comic book character. Police used security camera footage to link Otis to the alleged crime.

Detectives contacted him to negotiate his surrender at the station, police said. Otis was booked for felony vandalism and bail was set at $20,000.

The Hollywood Historic Trust, which oversees the Walk of Fame, ordered immediate repairs to the star after learning about the vandalism on Oct. 2. The repairs cost approximately $3,000, Hollywood Chamber of Commerce spokeswoman Ana Martinez said. A barricade has been placed around the star.

“Any star, which is vandalized or destroyed, no matter which honoree it belongs to, will be replaced by the Hollywood Historic Trust, a nonprofit, nonpartisan group. The Hollywood Walk of Fame is a historic landmark which celebrates the professional contributions of the inductees,” said Rana Ghadban, president and CEO of the Hollywood Chamber of Commerce. “The stars, once installed, are considered part of the historic fabric of the Walk. When people are angry with one of our honorees, we would hope that they would project their anger in more positive ways than to vandalize a California state landmark. Our democracy is based on respect for the law. People can make a real difference by voting and not destroying public property.”

Trump’s star is located at 6801 Hollywood Blvd. and was awarded in 2007 for his work in television. Otis previously vandalized the star on Oct. 26, 2016, days prior to Trump’s election as president. He later pleaded no contest to felony vandalism and was sentenced to probation and community service, and required to pay fines and restitution.

Another man – Austin Mikel Clay – pleaded guilty in November 2018 to vandalizing the Trump star during the previous summer. Clay, who was 24 at the time, was sentenced to one day in jail, probation and community service, and required to undergo psychological counseling and pay restitution.