A trip to Provence: Clicking your heels twice at Le Jardin 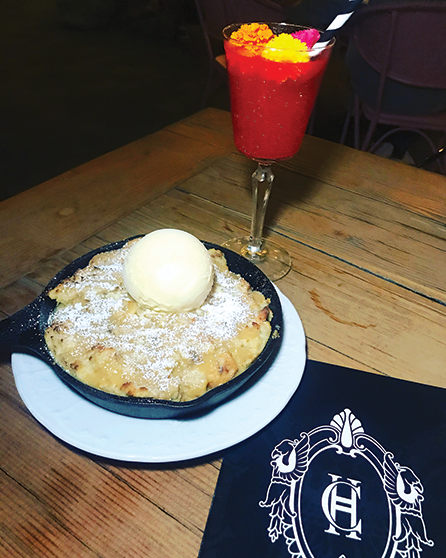 The Ruby Slipper cocktail has edible gold glitter and a crown of colorful flowers. (photo by Jill Weinlein)

Meeting a friend for dinner on the al fresco dining terrace of Le Jardin in Culver City, I was delighted to see that downtown is vibrant again, especially around the flatiron-shaped Culver Hotel.

Walking to the host stand, I heard music wafting from the grand lobby. Musicians set up inside the hotel next to an open window every Thursday through Sunday, and performances include some of the Culver Hotel’s favorites – Sylvia & the Rhythm Boys and We the Folk. The night I dined, two guitarists who have opened for the popular Gipsy Kings, played lively salsa, pop and soothing flamenco music.

Classic black-and-white movies were displayed on an outside wall, near where my friend and I were seated. A Culver City resident who cites Le Jardin as her favorite restaurant in town, my friend said we must order one of the bar’s most iconic cocktails – the Ruby Slipper.

Our server arrived  to tell us about the specials and delivered two tightly rolled warm washcloths, similar to what passengers in business and first class receive on an airplane, to clean our hands.

The red cocktails with colorful flowers crowning the top are made with Absolut Elyx Vodka, lime juice, raspberry syrup and edible gold glitter. When I spun the black-and-white paper straw in the glass, it looked like a snow globe with swirling glitter floating around.

After a few sips, I said to my friend, “let’s close our eyes, click our heels twice and imagine we are transported to a charming outdoor cafe in Provence or somewhere in the south of France.” That is the atmosphere while dining at Le Jardin.

Other fun libations on the extensive menu have names paying homage to the nearby historic Culver Studios and a few blocks away, the MGM Studios, now Sony Pictures. There is Some Like it Hot, If I Only Had a Brain, Toto’s Basket and The Wiz.

The restaurant reopened in September with its new name, Le Jardin. The owner, Maya Mallick, felt this name matched the hotel’s French design. The dining patio is much larger after Mallick received approval from Culver City’s Downtown Business Association to increase social distancing.

Looking over our dinner menu, general manager Alfredo Tebano approached our table to welcome us and share some fun facts.

“Actors Charlie Chaplin and John Wayne once owned the hotel, and Wayne won it for one dollar in a poker game,” Tebano said. “During the filming of ‘The Wizard of Oz,’ around 124 of the movie’s ‘munchkins’ took over the hotel, partied all night and slept three to a bed in each room.”

He told us that Harry Culver dreamed of building a hotel between Abbott Kinney’s new Venice canals and downtown L.A. He founded his namesake town in 1917, when he was just 37 years old, and led tours while advertising his favorite slogan, “All Roads Lead to Culver City.” He constructed his hotel on what has been called “the shortest Main Street in USA,” and in 1924, when the hotel finally opened, it was called the Culver skyscraper. Now, Mallick has been reviving its classic vintage beauty and adding a little modern glamour to its artful design.

Ready to try some items on chef Ben Diaz’s new menu, we ordered the foie gras torchon as our starter. Torchon means “dish towel” in French, and this talented chef wraps foie gras tightly in a towel or cheesecloth before cooking. Since it’s rolled into a cylindrical shape, he just slices it and places the perfect sphere on top of sweet Bing cherry jam, sprinkles a little Sonoma sea salt and serves it with a small flower petal and micro pea shoot salad and grilled sliced brioche. It’s the ideal balance of savory, earthy and sweet.

Other appealing starters include a beet tartare with Persian cucumber, quail egg and a bourbon gastrique. The tagliatelle olio has heirloom sundried tomatoes, a poached egg, compressed feta and shaved parmesan.

The grilled fish he served to us was marinated in wine vinegar, paprika and other spices. Diaz adds shaved fennel, shallots, roasted baby yellow and purple root vegetables and tops it with finely chopped parsley, a drizzle of olive oil and sprinkling of oregano.

The oxtail birria is the ultimate hearty autumn dish served in a bowl. Birria is a celebratory dish from the Jalisco region in Mexico and served at weddings and during the holidays. Diaz slices pink, compressed watermelon radish and a drizzle of silky lime-flavored crema to oxtail meat and bones that have stewed for five hours in beef broth until tender.

We finished the evening with a bread pudding baked in a cast-iron skillet with vanilla custard and caramel orange syrup. It’s topped with a big scoop of vanilla bean ice cream.

My friend said we should come back for their weekend brunch, because she adores Diaz’s lemon ricotta pancakes and lobster avocado toast, plus they serve bottomless mimosas. She said the Ms. Maya  – named after the owner and made with Grey Goose vodka, elderflower liqueur, grapefruit juice and rosemary – is the quintessential brunch cocktail.