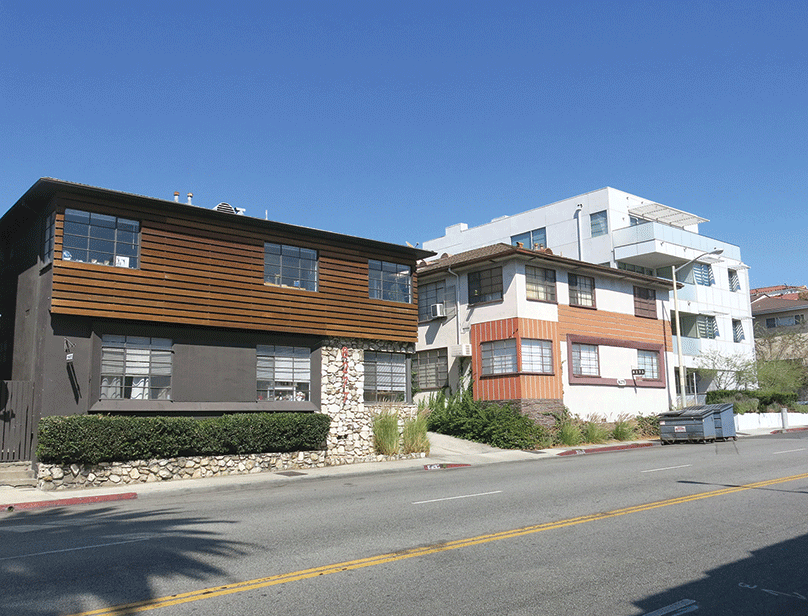 If its appeal is denied, West Hollywood will be required by the state to build nearly 4,000 new housing units between 2021 and 2029. (photo by Cameron Kiszla)

West Hollywood will the appeal the decision on the amount of housing the state of California is requiring to be built in the city between 2021 and 2029.

While council members did not dispute that more housing is needed, they questioned the fairness of the process during their Sept. 21 meeting.

So far in this cycle – the fifth cycle, which lasts from 2013 to 2021 – West Hollywood has far exceeded the RHNA’s goals, city staff pointed out.

“Last cycle, we had a much lower allocation due to the fact that a lot of the data collection was established during the economic downturn in 2008 as a baseline, so we ended up with 77 units. We actually produced 2,259 units thus far because the cycle is not over,” Senior Planner Rachel Dimond said.

Meanwhile, other nearby cities were given the similar allotments for this upcoming cycle, and City Council members and city staff said the other nearby cities did not produce nearly as many new housing units as West Hollywood. According to Beverly Hills spokesman Keith Sterling, Beverly Hills has awarded permits for 201 units as of 2019, when it was required to build only three units this cycle.

Beverly Hills will be asked for 3,096 units in the sixth cycle, Culver City will need to produce 3,333 units and Santa Monica will need 8,873 units. In comparison, the city of Los Angeles will need nearly 456,000 units.

Though all five council members expressed support for building more housing, the council voted 3-2 to appeal the RHNA allocation. Mayor Lindsey Horvath and Councilman John D’Amico voted against the appeal.

“This burden is too heavy,” Councilman John Duran said. “Four thousand units over the next eight years is too large of a burden for us to bear … West Hollywood, we’re one of the very few cities that actually works really hard to hit our RHNA numbers, and I think we should be rewarded for that.”

“I do think that we need to appeal and at least get it on record that we feel that 3,900 units is really burdensome to our city, especially when Beverly Hills is allocated 3,100 and yet they’re three or four times our size, and Culver City is only given 3,300 and they’re also 5.1 square miles [while West Hollywood is 1.9 square miles], and their densities are so much lower than ours, and they haven’t hit RHNA numbers like we have,” Councilwoman Lauren Meister said.

“[Given] our success in the prior period, some credit should be given to us for our overproduction in the past, and I support the idea of moving forward with some kind of appeal,” Heilman added.

D’Amico, however, argued that the city would not face negative impacts if it agreed to the numbers now and was unable to meet the RHNA goals.

“The sense that everything matters and nothing happens around community development of the state makes me think this is a big waste of our time,” he said. “We should just say ‘fine’ and we should do what we usually do, which is build units, set 20% or more aside [for affordable housing], then in eight years, we’ll report back that we built 2,400 of them instead of 3,900, and they’ll say nothing and we’ll say nothing and then we’ll just keep moving on.”

Horvath argued that West Hollywood, which has created “policies that actually produce housing,” should not be “carrying the mantle and the water of cities who are trying to avoid development, and that’s why they’re fighting their RHNA numbers.” She also argued that city staff’s time could be better used than on an appeal, which must be filed by Oct. 26.

“I’m much more interested in seeing our staff focus on policies that create housing, not fight its production,” Horvath said.

However, with the council’s vote, West Hollywood will seek to get credit for last cycle’s housing successes in this upcoming eight-year cycle.

“All these other cities that didn’t produce the required units, they’re being treated the same way as we are, and that is what I think is unfair,” Heilman said.

The council also considered several other housing-related matters on Sept. 21, including beginning the process of creating a task force to help with the community engagement portion of the RHNA process.

Though staff initially proposed that the task force could be comprised of some of the city’s board and commission members, the council unanimously decided they would also like to include people more directly involved with housing, including residents of affordable housing, those on the city’s wait list for affordable housing, developers, realtors and property owners. City staff will assemble a list of potential task force members from each category, and the council will choose from that list who will serve on the task force.

“It’s up to each of us to try to figure out how to create that balance,” Duran said. “Maybe if we think about picking one from each side of the equation, we’ll have a well-balanced task force.”

The council also unanimously directed staff to study several items, including ways to incentivize property owners to build housing on underutilized commercial lots, the potential for micro-unit housing and co-living, and potential new incentives to encourage more housing to be built.

Meister and Horvath wanted staff to be aware that the council is not willing to give away too much to developers in exchange for housing, though if incentives were to be used, they should go toward creating middle-income and affordable housing.

“That should be the primary goal of everything that we do … These under-utilized lots, the last that we need to do is give more incentives … If nothing else, then disincentivize them. Say, ‘If you don’t put some housing on it, we’ll take your property and we’ll lower your zoning.’ But I don’t think we should be giving more incentives … We have incentivized ourselves into a very dense city,” Meister said.

“If we’re going to look at incentivizing anything, it should be what we want, not just development overall,” Horvath added. “I don’t think that’s what we need and, more importantly, I think there are ways we can take a look at zoning that incentivizes exactly the kind of development of lower- or very low-income units or the middle-income units, wherever we’re seeing the greatest need, in a way that the zoning still pencils out for developers.”

Heilman also raised concerns about micro-units, and he suggested buildings could include a micro-unit or two, instead of a building entirely made of micro-units, as that might contain too many people for the space, arguments to which D’Amico agreed.

“I have concerns about a building that is completely micro-units, that it creates such high levels of density that it creates an undesirable living environment in the long-term,” Heilman said.

Staff will return to the council within six months with the results of their study.

As part of its consent calendar, the council also began the process of developing an ordinance to allow cooling units – either permanent or portable air conditioners – to be installed in both new and existing housing.

“As a person who lives in a rent-controlled unit that does not have air conditioning, I personally experienced the impacts of what that looks like, and I’ve been there, where you ask if you can install one on your own, and I was shot down … I think this is consistent with past policy to make sure that renters are protected while they’re just trying to have a quality of life in their apartments,” Horvath said.

City staff will look into grants or rebates that may be available to help tenants purchase air conditioners, though the council members were clear that the units should align with the city’s overall goals regarding energy efficiency and climate change mitigation.

“As we look at this, we also need to be mindful that air conditioning sometimes contributes to climate change, and we don’t want to do anything that’s actually contributing to the problem that we’re trying to address,” Heilman said.