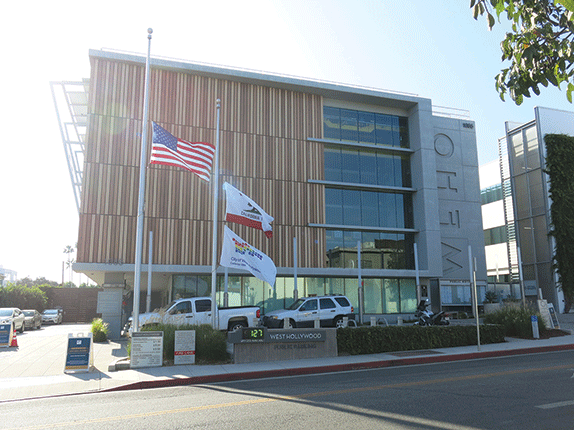 Flags flew at half-staff at West Hollywood City Hall to honor U.S. Supreme Court Justice Ruth Bader Ginsburg, who died on Sept. 18 at the age of 87.

Ginsburg, who served on the Supreme Court for 27 years, was known for her work on behalf of women’s rights and gender equality. At the time the city lowered its flags on Sept. 18, they were to remain at half-staff until she is laid to rest. However, City Manager Paul Arevalo decided that the flag will remain at half-staff for 27 days from the date of her passing – one day to represent each year that Ginsburg served on the Supreme Court.

On Sept. 26, President Donald Trump announced that his nominee to replace Ginsburg on the court will be Judge Amy Coney Barrett.

This article was updated at 10:35 a.m. on Sept. 28 to include that the flags will remain at half-staff for 27 days, and to reflect that Trump named his nominee to replace Ginsburg.

The Ford showcases the arts and expression in ‘State of LA!’ series