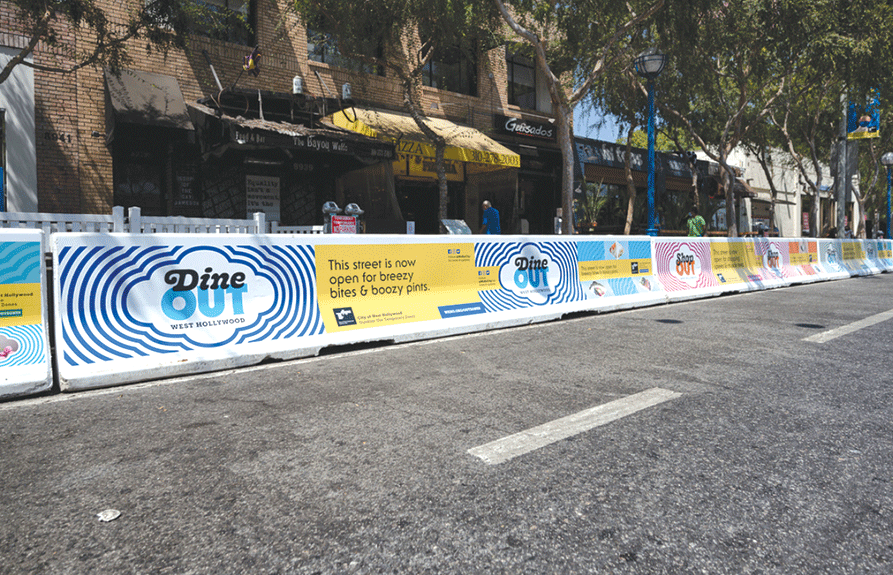 West Hollywood’s OUT Zones may remain in place at least through the end of 2021. (photo courtesy of the city of West Hollywood)

The West Hollywood City Council took action on several coronavirus-related items on Sept. 23, affecting everything from the city’s eviction moratoriums to grocery stores and local businesses. The council’s votes on COVID-19-related matters were all unanimous, with most coming as part of the consent calendar and the grocery store item considered by itself.

“We’re not allowed, under the new bill, to extend our eviction moratorium for the time being,” Assistant City Attorney Lauren Langer said. “So the local ordinance will expire at the end of this month and the repayment period for that ordinance will begin Oct. 1. There will be different obligations and responsibilities for both the landlords and the tenants under the new state law that will go until the end of January.”

According to the West Hollywood eviction moratorium, the repayment period for any rent that was not paid between March 1 and Sept. 30 will begin on Oct. 1, 2020, and that rent must be repaid in full before Oct. 1, 2021. Under the state law, tenants will still be protected from eviction through Jan. 31, 2021, as long as they pay at least 25% of their rent each month. The 25% payment requirement will begin on Oct. 1.

“It’s very complicated and it’s really difficult to navigate, and I think we’re going to need to do an extra-heroic job of educating the tenants in the city of West Hollywood exactly where they stand, as opposed to tenants in Los Angeles and other neighboring jurisdictions,” Councilman John Duran said.

Given that some residents might not be able to afford any rent payment at all, council members proposed a few different methods of providing aid.

“At the end of the day, we’re talking about protecting our people from homelessness and other severe impacts to their lives,” Duran said.

Mayor Pro Tempore John Heilman suggested that the city use its rent-relief program to support people who cannot pay 25% of their rent, instead of simply giving $1,000 grants.

“That may require us to rethink and restructure the program, but I don’t want to see anyone who’s facing a financial crisis be subject to eviction because they can’t meet that 25% threshold. Rather than the $1,000, let’s look at trying to utilize that money most effectively to protect the most residents that we can,” Heilman said.

City Manager Paul Arevalo said city staff will bring the results of a resident survey about rent payment to the council in October.

“When we come to council, we’ll come with a longer-term strategy to provide rental assistance to our residents,” Arevalo said.

The council also approved a six-month extension for the contract with Bet Tzedek Legal Services to assist residents with eviction protection and defense. Legal services, which are provided at no cost to West Hollywood residents regardless of immigration status, will cost the city up to approximately $458,000.

Duran, an attorney, said the different eviction moratoriums from West Hollywood, neighboring cities, the county and the state are confusing even for him.

“I cannot imagine a tenant who is not as familiar in dealing with courts, lawyers and law having to muddle through it, so I think these attorneys are going to be really critical,” Duran said.

The city is also continuing to advise residents on the coronavirus itself. As Councilwoman Lauren Meister noted, the city hosted a virtual panel on COVID-19 on Sept. 23 featuring Dr. Richard Riggs, senior vice president of medical affairs and chief medical officer at Cedars-Sinai Medical Center, and Cristin Mondy, regional health officer for the Los Angeles County Department of Public Health.

“The event [served] to provide our community members with the most up-to-date information about COVID-19 and the status of local response in West Hollywood and the Greater Los Angeles region,” Meister said.

West Hollywood plans to reach out to grocery stores to ensure compliance with COVID-19 health regulations. (photo by Cameron Kiszla)

The council also began the process of reaching out to area grocery stores for help in developing a draft ordinance that would help ensure better compliance with public-health rules.

“This is in response to concerns that we’ve all seen in any number of ways, people creating issues at local grocery stores, refusing to wear masks, creating problems and creating unsafe situations for people who patronize these businesses, but also the workers who work there,” Mayor Lindsey Horvath said.

The council’s motion was initially going to ask that a draft ordinance be brought back to the next meeting, but Councilman John D’Amico raised concerns about a lack of flexibility for local grocery stores.

“I just get nervous when we’re assigning public-health jobs to grocery store workers or other people whose job is not to make sure that people are following public-health orders. We have code compliance for that,” D’Amico said.

Heilman also noted that conversations with area grocery stores are “not going to happen overnight.”

“Individuals who work at grocery stores as clerks or stockers shouldn’t be in the position of having to enforce a mask mandate unless they’ve actually been trained and assigned to do that,” Heilman said. “The goal here is to work with grocery stores to make sure that there is [a grocery store employee] assigned to fulfill that function.”

Horvath agreed that the draft ordinance would come back at a future meeting, and all five council members approved the motion.

“It doesn’t need to be exactly the next meeting if we need more time to make sure that everyone weighs in,” Horvath said.

“I’m hoping we can use our normal methodology, which is to do everything we can to gain compliance, and utilizing the Business License Commission to revoke licenses or impose restrictions, that is typically our last resort,” Heilman said.

“Our intention here is to make sure that the Business License Commission is being used as its intended, to help with business regulation as it relates to the impacts of COVID,” Horvath added.

The council also discussed the city’s Outdoor Use Temporary Zones, or OUT Zones, which provide outdoor street, sidewalk and parking-lot space for restaurants, retail stores and other businesses to operate.

The council agreed to allow some additional hours beyond the original schedule of 8 a.m. to 10 p.m. For instance, restaurants can be allowed to stay open as late at 1 a.m. on some days, and retail stores and gyms could be able to open as early as 7 a.m. The application for extended-hours permits for OUT Zones can be found at weho.org/outdoorpermit.

The OUT Zones are expected to remain as long as the virus does, Duran said, and some could even become permanent.

Arevelo said city staff is expected OUT Zones to remain in place at least through the end of 2021.

“A lot of us aren’t as optimistic as the president that there’s going to be a vaccine and a cure to this pandemic anytime soon. Having this as a resource to our businesses and our community is critical, so we’re encouraging businesses to invest in these spaces and make them as comfortable for their clients as they can,” Arevalo said.

The council also voted to authorize better advertising of the city’s coronavirus-related rules, including a notice to area residents, business owners and stakeholders; and signage to be posted in common areas of apartment buildings, condominiums and hotels.