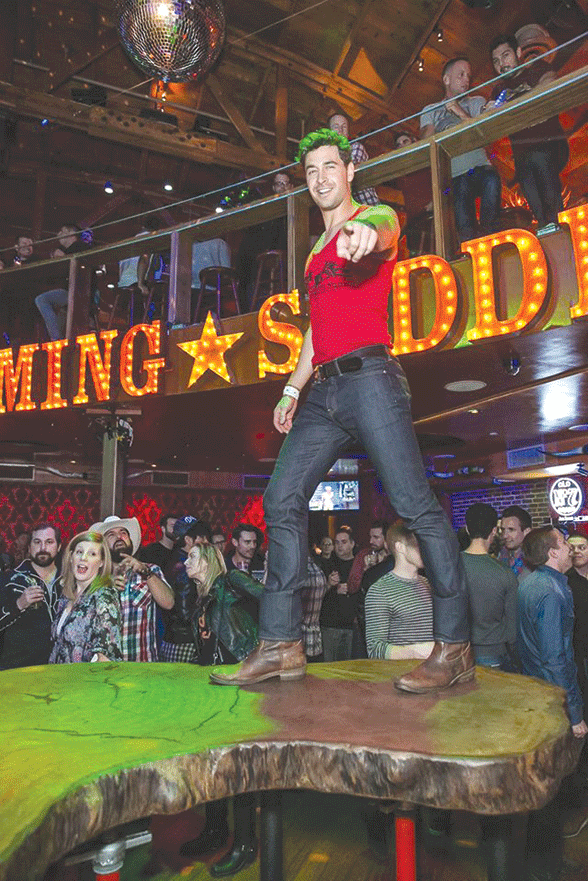 West Hollywood bars, such as the now-closed Blazing Saddles, have struggled during the pandemic. (Park Labrea News/Beverly Press file photo)

West Hollywood leaders including City Council members and the head of the West Hollywood Chamber of Commerce say they are not sure what business landscape will look like when the COVID-19 pandemic is over.

Several businesses have already closed and others will close, unable to survive the emergency. City officials said that it’s a challenge to know which businesses have closed or plan not to reopen given that there is no mandate for owners to inform the city.

“Many are just painstakingly holding on,” said Genevieve Morrill, West Hollywood Chamber of Commerce president and CEO. “Right now people are very concerned about opening at all because even if they do it safely … they could be shut down by the governor because of a spike in COVID.”

While some businesses have spent upwards of $100,000 implementing a variety of safety protocols, others such as bars and nightclubs that are still not allowed to reopen “have had no pathway to success,” Morrill said. With the rise in remote office work, she predicted that the brick-and mortar landscape will continue to change.

In West Hollywood, there are an abundance of initiatives aimed at supporting its roughly 2,000 businesses.

“The city of West Hollywood is committed to ensuring the vitality and resiliency of our local businesses. We have instituted many local initiatives aimed at supporting our small businesses during this uncertain time,” said Paolo Kespradit, management specialist for the city of West Hollywood. “I definitely think that all of our business sectors are feeling impacts related to COVID-19.”

Less than a month old, the city’s OUT Zone Program allows for the temporary expansion into the public right-of-way for restaurants, shops and personal care establishments. Through the free Temporary Outdoor Expansion Permit, the city offers streamlined approval for eligible businesses to use sidewalks, on-street parking spaces and private parking lots as areas to expand business operations.

According to Kespradit, by moving operations outside to ensure physical distancing while meeting protocols set forth by the L.A. County Department of Public Health, many businesses with indoor operations are finding new life in outdoor commercial space.

“It’s always really hard when a business shutters in our city. We’re definitely doing everything we can to make sure that our businesses are staying alive and are pivoting,” he said. “West Hollywood has a lot of culture, and we have a lot of great businesses that have been with us since the inception of the city.”

While not an immediate fix to the significantly reduced revenue for most businesses, West Hollywood’s free COVID-19 webinar series on its YouTube channel offers a multitude of informational presentations. From assisting West Hollywood’s brick-and-mortar stores in launching their e-commerce operations during COVID-19 to delving into the COVID-19 relief options, the webinars are aimed at helping small businesses survive.

The city has partnered with the West Hollywood Chamber of Commerce to offer mediation services for commercial tenants and landlords. Aimed at helping tenants and their landlords reach mutually agreeable settlements on how to structure rent deferral and reductions, the mediation services are geared toward helping businesses reopen and stay in business. There is currently a temporary moratorium on evictions for commercial tenants whose net income has been impacted by COVID-19, protecting them from eviction due to non-payment of rent between the period of March 16 and Sept. 30. At its upcoming meeting on Sept. 21, the City Council will discuss the possibility of extending the commercial eviction moratorium.

In addition to having implemented over a dozen local business relief measures, the city also compiled additional resources available for businesses, including its COVID-19 business toolkit, at weho.org/business.

While “retail operations are pretty much at a standstill,” Kespradit said that the city is actively working with the county to find ways to reopen its bar sector and historical venues like the Whisky a Go Go.

“I feel really bad for many businesses. So many of the small businesses are closed or just never going to reopen,” said Kenny Tashman, third-generation owner of Tashman Home Center. The West Hollywood hardware store, which has been on Santa Monica Boulevard for 60 years, is among the limited number of essential businesses that never had to close during the pandemic. Tashman said his store continues to find increasing favor with locals who “realize they’re going to be in their house probably for the next year” and are using the time to make home repairs and undertake gardening and painting projects.

In the beginning of the pandemic, Tashman recalled selling around 50,000 face masks in the first three months. Like all businesses, getting PPE for clients like protective masks and sanitizer was a challenge.

“It was a zoo. It was crazy. In the beginning, nobody had them. I was the only guy,” he recalled, noting that in all this time, not one of his 35 employees has tested positive for COVID-19. “It was kind of chaotic. Everybody was so nervous, but my staff really held it together.”

Then came the civil unrest.

“That was really traumatic for the neighborhood because a lot of businesses got smashed,” Tashman recalled, noting that locals banded together to board up businesses and are continuing to offer support to impacted businesses. Many neighboring small businesses, like nail salons and massage parlors, he suspected will never again reopen.

While supermarkets, big box retailers, cannabis providers and liquor stores may have remained open throughout the pandemic, inside dining at restaurants and bars without a full kitchen have remained closed for the bulk of the pandemic. Retailers are at significantly reduced capacity and hair salons were only recently allowed to reopen at 25% capacity.

News recently broke that the Wild West-themed Flaming Saddles had closed, and just east on Santa Monica Boulevard another gay bar, Gym Sportsbar, was in the process of finding a new space in which to reopen once the county again allows bars to resume operations. There are roughly 30 bars in the West Hollywood landscape, including those in hotels. Neither of the city’s two longest serving council members, Mayor Pro Tempore John Heilman and Councilman John Duran believe that the closure of gay businesses will dramatically impact the city.

Since its incorporation as a city in 1984, West Hollywood has been the Los Angeles epicenter for the LGBT movement. Duran said that of the “38% to 39%” of residents who identify as LGBT, some will need to move out of the city in response to the pandemic.

“I think West Hollywood’s identity as an LGBT mecca will survive and its institutions will continue to be reshaped,” he said. “We’ve endured so much historically, from an AIDS epidemic to criminalization of our existence to being able to get married to the freedom to serve in the military. We have taken on popes, presidents and disease, and we’ve always been able to rebound and come out strongly. We’re very resilient under extreme pressures.”

Earlier this year, Christopher Street West, the nonprofit that produces the annual LA Pride Festival and Parade, announced that it would be moving the three-day event out of West Hollywood, in part to collaborate with other movements for social change.

Heilman said he expected that additional businesses across West Hollywood would shut down or change hands soon.

“There are establishments that close and there are new ones that open,” he said. “There is a constant evolution in every business community.”

I am a long-time West Hollywood resident and long-time (35 years) patron of some the bars that are closing, such as Rage. It is a TRAGEDY that the City of West Hollywood is not doing more to preserve the specific LGBT spaces. They want to see the commercial properties rented or owned by the highest bidder (for their revenue), not preserve the historically LGBT businesses and cultural institutions. My new podcast episode about this is here:

“Episode 67: Gay Men and the Need for Safe Spaces of Our Own”