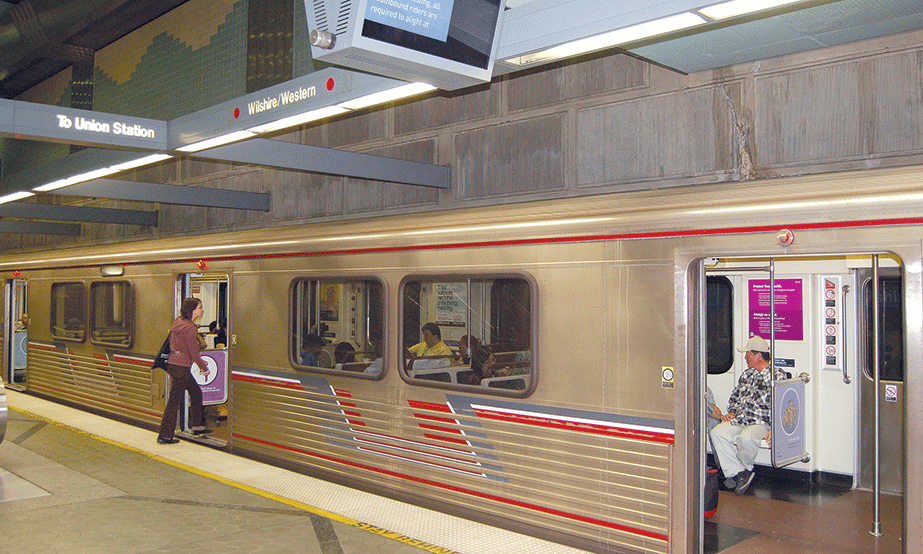 The quest to bring rail service to West Hollywood is one step closer to coming to fruition.

The Los Angeles County Metropolitan Transportation Authority Board of Directors included approximately $2.8 million for the environmental impact report for the Crenshaw Northern Extension in its fiscal year 2021 budget, which was approved on Sept. 24.

The funding won’t be enough to complete the environmental report, which David Fenn, an associate planner for the city of West Hollywood’s Long Range Planning Division, said could take up to 36 months to complete, but it allows work to begin on the EIR in a timely fashion. Additional funding can be allotted in next year’s budget, Fenn added.

Timeliness is an important element, as West Hollywood hopes to accelerate the project – anticipated to open in 2047 – by as much as 20 years. That acceleration will depend on how much funding West Hollywood and the city and county of Los Angeles can contribute, as well as outside funding, such as state and federal grants.

However, Fenn noted that the funding of an EIR is an important step.

“This is a huge milestone, where we are right now,” Fenn said. “The city has been working since 2015 to make this project happen, and the goal for the last five years is to get Metro into an EIR. An EIR is the last step before a shovel-ready project that’s eligible for state and federal funds.”

“It is a dream come true for our community,” she said. “We’ve been working on this for many years, and it’s been a team effort, but we are finally underway with an EIR that is funded to determine which rail line to come to West Hollywood and connect us with the region.”

Horvath added that “there’s much more work to be done,” but “we know now is that this project is real,” and continuing to engage the public will be key to the project’s continued success.

The EIR process – which is conducted by Metro – involves community outreach, Fenn said, but the city of West Hollywood will also be reaching out to the public and surveying its residents on its own. Fenn said the City Council will consider funding a study on Oct. 5 that examines first-mile, last-mile options, where station entrances should be located, connections to buses and “all sorts of things.” 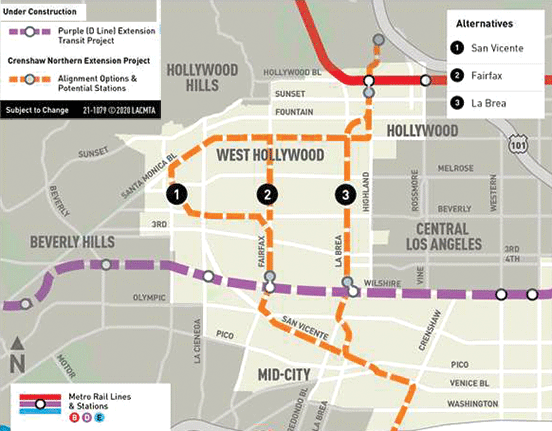 The three possible routes for the Crenshaw Northern Extension all service West Hollywood. (map courtesy of the city of West Hollywood/illustration by Karen Villalpando)

The EIR will also help determine which of the three routes the Crenshaw Northern Extension will take. The westernmost route, which begins where the Crenshaw/LAX line currently ends at Crenshaw and Exposition boulevards and travels up Fairfax Avenue, San Vicente Boulevard and Santa Monica Boulevard, has proven to be popular with many in West Hollywood. Other routes include a straight shot up Fairfax to Santa Monica Boulevard, as well as traveling up La Brea Avenue. All three routes connect with the Hollywood/Highland Red Line station, and they potentially could travel beyond Hollywood and Highland to reach the Hollywood Bowl.

“EIRs look at all sorts of impacts, sound impacts, view impacts, traffic impacts, impacts to historic structures, impacts to sensitive communities,” Fenn said. “There’s a whole laundry list of things they have to look at. Before they look at what the final specific route is, they have to do some preliminary engineering that allows them to do that analysis.”

In a statement, Metro spokesman Jose Ubaldo said Metro is excited to be working with West Hollywood and the other communities that will be served by the Crenshaw Northern Extension.

“We are looking forward to working with the communities along the route to better define the project route and station locations. Metro Board approval of the FY21 budget makes it possible for this work to get underway,” Ubaldo said.