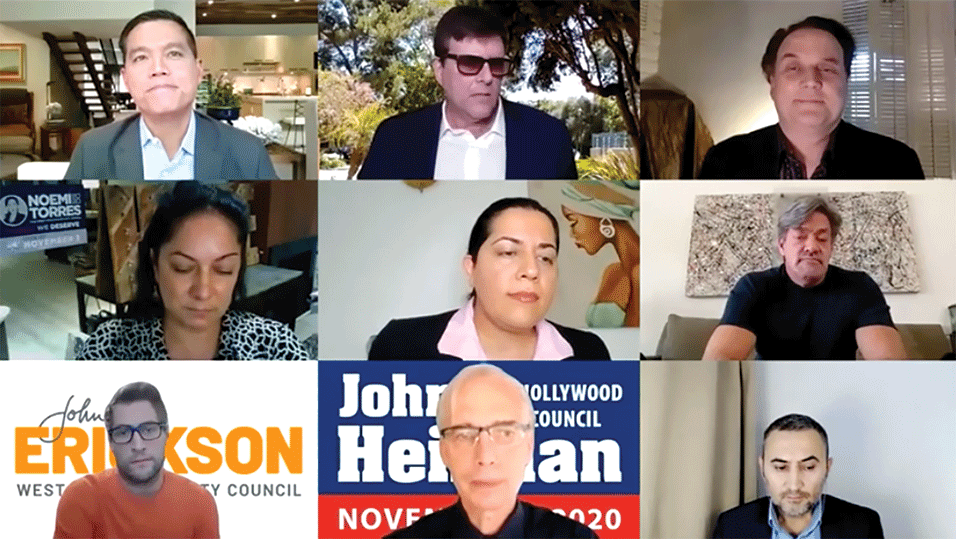 Eight of the candidates for West Hollywood City Council made their cases for election during the West Hollywood West Residents Association’s Meet the Candidates Forum on Sept. 13.

On the topic of bringing rail to West Hollywood, all of the candidates expressed some degree of support for the rail line, which is currently scheduled to open in 2047, though the city is working to accelerate that timeline by as much as 20 years by bringing in additional funding through state and federal grants, as well as a potential Enhanced Infrastructure Financing District, which leverages anticipated property-tax increases near the rail line to help pay for the project.

Yusupov noted that the rail service is “a good idea” that “should help with relieving some of the traffic in the city,” though as progress is made, city leaders need to remain mindful of the cost that the city will bear.

“Bringing in the Metro subway, though it will change the overall makeup of transportation routes, that’s a positive step, but the devil is in the details, so that’s what we need to look at as it gets closer,” Yusupov said.

Block said he supports the project, though he is against the two proposed routes that travel down Santa Monica Boulevard, as they would negatively affect that street’s businesses during construction and would bring too many people from outside the city. Block’s boutique, Block Party WeHo, is located on Santa Monica Boulevard.

Block wants transit to come to the city’s edges – like in the proposed route that goes up La Brea Avenue – then have riders use the city’s transportation to get around, which he said would help protect small businesses and the community “from people pouring out onto the street.”

Erickson said he “enthusiastically” supports the subway, including the westernmost route that would travel the farthest on Santa Monica Boulevard to “bring the most economic boom to this local area.”

“We need to make sure this city is connected locally and regionally,” Erickson said.

Erickson added that accelerating the construction process will have many benefits for West Hollywood and will help fight climate change by reducing car traffic, but community support will be vital.

“We need to do all that we can to bring the Crenshaw Northern Extension to West Hollywood. We have to do it right,” Erickson said.

Torres also supports the plan, but echoed her fellow candidates in saying that the rail system needs to be designed well and there needs to be public support for the plan.

“I’m really excited to see this happening, and breaking ground on this amazing artery that we’ve been missing for quite some time will make us part of the rail system. We’ve been wanting to do this for a while … We’d better do it right than make it wrong, where people won’t be able to actually use it,” Torres said.

Heilman, an incumbent who has served on the council for all but a few months since the city incorporated in 1984, said he is also “a big supporter of bringing Metro to West Hollywood,” and discussed some of the funding mechanisms the city could use to help accelerate the process, including the EIFD and selling advertisements.

“Obviously, we need to do this right. We need to make sure that any stations built in West Hollywood serve our community and do not become a gathering place for problematic behavior,” Heilman said.

Shyne said she is also “a big supporter of bringing Metro to West Hollywood,” and said the westernmost route, which is also known as the hybrid route because it travels up Fairfax Avenue, then turns to travel up San Vicente Boulevard, has the most public support.

“It’s very important for climate change and for our community. We did a lot of community outreach and the community residents that gave feedback wanted the San Vicente line … It is going to help our businesses,” Shyne said.

Duran, who has served on the council since 2001 and is running for a “sixth and final term,” said he also supports the project and would like to see multiple Metro stations in the city. Duran also addressed Block’s criticisms directly, pointing to the potential for the Metro project to bring an economic boom to Santa Monica Boulevard, which would allow for the creation of more housing – a need in West Hollywood and elsewhere in Greater Los Angeles – and other desired attractions like a theater.

“It could become a major, extraordinary project that realizes so many goals,” Duran said.

Cleary said he is also in support of the project, though he noted that two decades ago, when Santa Monica Boulevard was renovated, the extended construction period negatively impacted the business owners on the street. Cleary added that construction would also affect nearby residents.

“What are we going to do in the meantime when this dream subway line is being built?” Cleary asked.

Cleary also wants to create a think tank to look for the next transformative transportation trends, such as e-scooters and ride-hailing services, that might change how people travel in the next few years.

The eight candidates also addressed the ongoing homelessness crisis, with DeCastro asking specifically about those people experiencing homelessness who refuse services or assistance.

Erickson expressed sympathy for people experiencing homelessness and said he would never support criminalizing homelessness. He suggested that, because West Hollywood contracts its services, it should work with countywide groups to address the needs of residents and the homeless.

Torres echoed Erickson in expressing compassion for those who are unhoused.

“We could be a minute away from homelessness, so we have to have empathy for the people who are experiencing that, making sure that we’re supporting them with social services,” Torres said.

Torres highlighted groups like Project Angel Food, which provide food to people who are seriously ill so that they can put their money toward remaining housed, and said West Hollywood needs to discuss providing services, such as places for the unhoused to access “the essentials, like a restroom, a shower, being able to get a meal.”

Heilman said the city funds homelessness services and  has gotten 75 people into housing, but they were experiencing economic problems, and state laws make it “very difficult” to help those experiencing “severe mental illness … unless you are so gravely disabled that you can’t take care of yourself.”

“That’s wrong and it needs to be changed,” Heilman said.

Heilman also suggested moving the city’s homeless outreach facility out of the library.

“It’s creating too many conflicts there. Homeless people have the right to access the library, of course, but it’s not the right place to house social services,” Heilman said.

Shyne said the city should continue to help keep people housed and should work with regional partners, as homelessness “is a regional problem,” she said. Shyne suggested more outreach to the community would help, but she also wants the city to provide more services such as bathrooms for people experiencing homelessness to use at night.

“We have too many conflicts and too many young children there that play and neighbors,” Shyne said.

Duran echoed many of his fellow candidates in expressing sympathy for people experiencing homelessness, but said “it becomes problematic when they become public threats to our community.” Duran added that he’s against putting homeless services, such as washing stations, in parks, as that is a shared space that the whole community should be able to use.

“That is bad policy. It only attracts more problems into our public space and is doing nothing to address the homelessness issue … There’s got to be a line to compassion,” Duran said.

Cleary supported moving the homeless outreach center to another location.

“I agree that we should move it out of the library, maybe having a truck that goes around and offers social services in different neighborhoods where the homeless are sleeping,” Cleary said.

“I think trying to figure out a better way to attack [homelessness] on a couple of different sides in a way that hasn’t been done before would be the best way, because right now, what we’re doing is not enough,” Cleary said.

“We also have to push our regional partners. We have to work with nonprofits in L.A. County and Los Angeles to do a better job, because we cannot be thinking that if we clean up our streets, it’s not going to happen again [if it’s still] happening in a broader area of L.A. County,” Yusupov said.

Block advocated for showers and more outreach to the homeless community, but also expressed frustration about the lack of progress in combating homelessness thus far. Block said people experiencing homelessness have pulled knives on his employees and shoplifted from his store, and he echoed Duran in saying there is a limit to compassion.

“It’s too much. You can’t reopen an economy and invite people back to our restaurants and our bars with people sleeping all over the streets … This is not acceptable,” Block said.