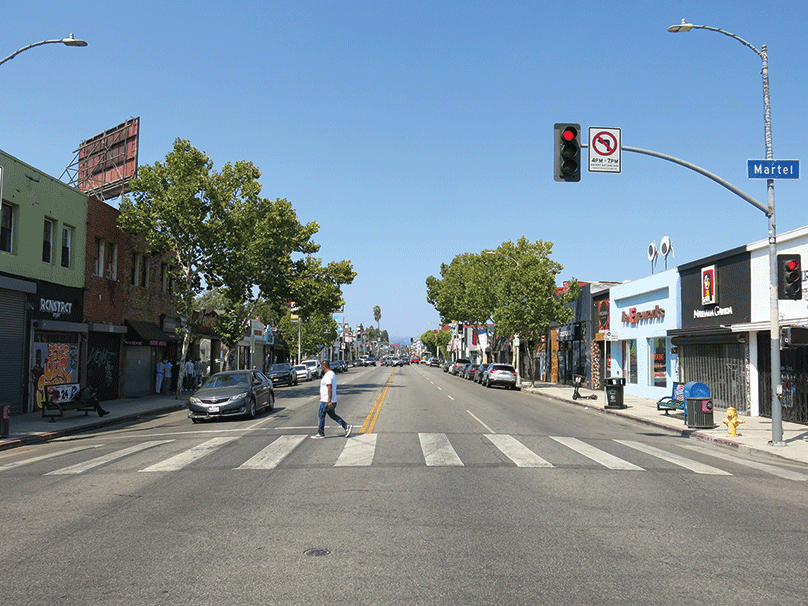 Both support and opposition continues to grow for “Uplift Melrose,” a proposed plan that would dramatically change the shopping and dining district between Fairfax and Highland avenues.

Los Angeles City Councilman Paul Koretz, 5th District, is still analyzing responses to an online community survey that closed on Aug. 31 seeking public input on the proposed project and has not made a decision whether to support or oppose moving forward, spokeswoman Ali Simard said.

It is unclear when Koretz will make a decision, but the clock is ticking. The project, proposed by the Streets LA and the Melrose Business Improvement District, is contingent on the city receiving a $31.8 million state grant from Caltrans. The deadline to apply for the grant is Sept. 15. Streets LA, formerly the Bureau of Street Services, is awaiting a decision by Koretz to move forward with applying for the grant. Los Angeles Department of Public Works spokesman Paul Gomez said on Sept. 2 that Streets LA has no updates on the plan.

According to a description by Streets LA, the project would be implemented along a 22-block stretch of Melrose Avenue. It aims to make Melrose Avenue safer while creating more space for pedestrians and cyclists. The plan calls for lane reductions on Melrose Avenue, resulting in one traffic lane in each direction, as well as dedicated bike lanes separated from the lanes for cars. Curb extensions would be created at intersections to reduce the amount of distance required to cross.

Raised crosswalks, which are a couple inches above the street surface, would also be installed and more trees would be planted. Streets LA determined approximately 8,000 square feet of pedestrian space can be added to each block. Fewer drivers will be able to traverse Melrose Avenue, and some parking will be eliminated where sidewalks are expanded. Left turns would be restricted everywhere along Melrose Avenue except at Fairfax, La Brea and Highland avenues.

Amidst the uncertainty about whether the plan will move forward, both opponents and proponents have voiced opinions. Opponents believe the plan will cause traffic congestion in the surrounding neighborhoods and the loss of parking will harm businesses. Supporters believe the project will transform Melrose into a more vibrant shopping and dining district and attract more visitors, in turn boosting the local economy. In addition to the Melrose BID, the Mid City West Community Council has voted to support “Uplift Melrose.”

“We went out, door-to-door and spoke to all the merchants. The overwhelming response is positive,” said Isack Fadlon, a member of the Melrose BID’s board and owner of the Sportie LA shoe store on Melrose Avenue. “Some are raising concerns about cut-through traffic and parking … and those are things that can be addressed. A traffic study is part and parcel with this grant, and there is going to be a lot more public comment opportunity. Let’s not give up on an opportunity to bring $30 million to our neighborhood.”

Richard Pink, owner of Pink’s Hot Dogs near Melrose and La Brea Avenue, also said he emphatically supports the “Uplift Melrose” project. He believes it could return Melrose Avenue to its status in the 1980s and 1990s, when the district was extremely popular and flourished with businesses and iconic restaurants, including Tommy Tang’s and Chianti. 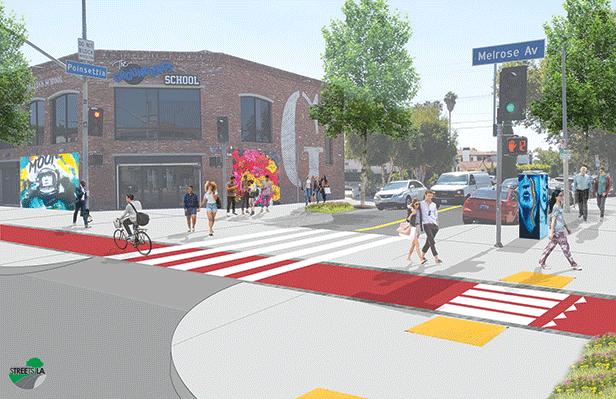 The “Uplift Melrose” project would include crosswalks raised a few inches above the street surface. (rendering courtesy of Streets LA)

“What I like about it is it revitalizes one of the iconic streets, corridors and arteries in Los Angeles. I think it will bring people back to the neighborhood and create a new energy for Melrose,” said Pink, who grew up in the area and graduated from Fairfax High School. “I am very much in favor of it. I just think it will be a wonderful addition to our city. We will have to solve some traffic issues and some parking issues, but it is worth it.”

Opponents are organizing against the proposed project, including the Melrose Action Neighborhood Watch. The organization’s administrative committee voted to oppose “Uplift Melrose” based on potential impacts on traffic, parking and quality of life for nearby residents. Opponents are also seeking more transparency from the city, as many only recently learned about the project when it is already facing a critical deadline in applying for a grant.

“The neighbors who would be most adversely affected say this is an ill-conceived plan,” said Peter Nichols, co-founder of the Melrose Avenue Neighborhood Watch. “To be under such an insurmountable gun to proceed in the midst of a pandemic … is unconscionable. This is a major, major, major impactful project. While we would love to see Melrose improved and beautified, our committee decided that as this project is proposed, we can’t support it.”

Nichols said he is also consulting with the nonprofit Fix the City, which reached an earlier settlement with the city of Los Angeles in a lawsuit filed over “road diets” in other parts of the city where traffic lanes were removed to create more pedestrian-friendly environments. Fix the City was opposed to the way the infrastructure projects were implemented without adequate public input and vetting.

Jim O’Sullivan, vice president of Fix the City, said the settlement reached with the city in its lawsuit stipulates that the extensive public outreach be conducted before any major street infrastructure plan moves forward. O’Sullivan said the process involving “Uplift Melrose” may violate terms of that settlement, which is something the organization’s attorneys will be looking into, he said.

Meanwhile, both sides remain in limbo until a decision is made about moving forward. Simard said a decision by Koretz will likely be coming soon. The public can view the proposed plans by visiting streetsla.lacity.org/melrose.

There has been no outreach to the community that lives there. They decided on a plan without any thought about how it would affect the traffic, the congestion, the construction, parking, the business.
There is no parking on the streets below, or above. No consideration of the shop owners, only the owners of their buildings.
Expecting people to get out of their cars so they can have bike lanes while they take away 2 car lanes from Melrose a well-traveled street, making the decision on how people travel.
instead of connecting with the community, making sure that no one knew what was going on, and then having a zoom, where mostly everyone was against it. Next Door Neighbor, was opposed. by a vast majority, and then saying everyone wanted it when most people had not heard of it. Secrecy, a great tool. MCW who is supposed to be our representative has never been there for the community, and always votes with developers. ..They took a position with no input. What is MCW function?