The future looks brighter at Leviathan 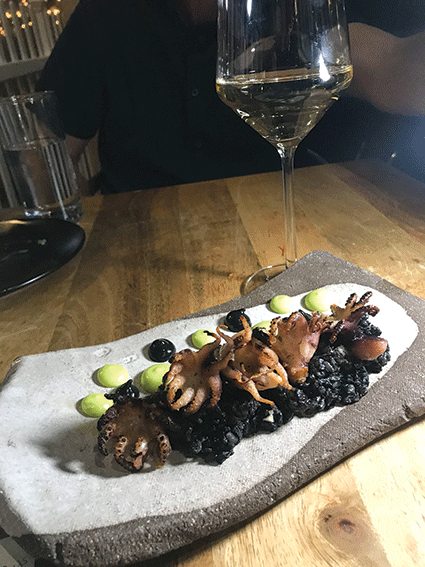 The grilled baby octopus at Leviathan is served with black rice and parsley cream. (photo by Jill Weinlein)

In 2014, I reviewed Scratch Bar on La Cienega, after hearing about this hot new chef – Phillip Frankland Lee and his pastry chef wife, Margarita. Both in their 20s, they were talented, creative, ambitious and confident. They offered a one-of-a-kind, multi-course meal and a la carte items.

I followed them when they moved Scratch Bar to the San Fernando Valley. Next, they opened a vegan restaurant, the Gardarene Swine in Studio City, preparing exotic vegan dishes that no one has ever tasted before, and soon, Phillip was cast on Bravo’s “Top Chef” television show. With his success and fame, he and Margarita opened restaurants in Santa Barbara and Sushi Bar in Encino.

When the pandemic hit in March, they put the interior seating inside Scratch Bar on ice and quickly offered Sushi Bar boxes for takeout. During this lull, this dynamic duo formulated their next restaurant concept. They took over a space in Encino and designed an outdoor dining terrace and hired chef de cuisine Dylan Stage to collaborate in creating an outdoor kitchen for wood-fired food. The menu at the new Leviathan draws inspiration from Stage’s years spent cooking in some of Spain’s top Michelin-starred restaurants and notable restaurants in New York City.

Last week, my husband and I visited his all-outdoor, 16-seat restaurant and were greeted by his personable sommelier/manager/server Austin Ferrier. We were seated at a table for two and received the one-sheet menu.

Grilled seafood, an American or Japanese Wagyu ribeye served with turnips, figs and peanuts; and a pork belly dish served with melon and mint in a savory broth are offered as entrées, and a variety of interesting small plates or starters.

On the backside of the menu are four cocktails that include a vermouth spritz, classic daiquiri, bourbon and lime with allspice called the Lion’s Tale, and a gin and tonic with rosemary. They also serve five different beers, four different 5-ounce sakes and a handful of aperitifs and digestives.

Looking over the wines, Ferrier has curated a few bottles of bubbly and rosé but focused his list on some interesting white and red wines. He recommended I try the 2018 Domaine Mittnacht Cuvee Gyotaku. Made in France with a blend of different wine grapes including pinot blanc, riesling, muscat, pinot gris and gewürztraminer, it’s surprisingly not too sweet, and paired nicely with the shima-aji (striped jack) in a cucumber and shiso broth that is enhanced with a melon granita that melts to create a sweetness to balance the earthiness of the broth. On top were crispy and slightly salty tapioca puffed pearl crackers.

For another white wine, Ferrier suggested the Isabelle Garrault Sancerre, a French wine made with 100% sauvignon blanc grapes. This paired well with the grilled Santa Barbara spot prawn served on tomato bisque with a halved hard-boiled quail egg and bottarga (salty fish roe).

The fire-grilled lobster was split in half and included a claw, so diners receive plenty of meat. It was accompanied by a small dish of long fennel ribbons with sliced peaches and a mild yogurt dressing.

The team of chefs at the grill did a nice job, especially with the king crab, which they shelled and placed in a basket to grill before arranging the tender, succulent white meat on top of thick slices of juicy watermelon with a dollop of creamy ricotta, a sprinkle of micro greens and colorful sliced cherry tomatoes.

Six lucky distanced diners can watch the action of the outdoor grill at a special chef’s counter with removable plexiglass partitions. They can watch the ocean trout, which looks and tastes similar to salmon, be grilled to the perfect temperature. It’s placed on a plate with ribbons of cabbage bathed in a mustard sauce, next to sliced potato and tender lentil salad.

The most dramatic looking dish was the baby octopus served on top of garlicky midnight black rice and dots of parsley cream.

Save room for pastry chef Margarita’s creamy lavender sourdough panna cotta, which is presented in an interestingly shaped bowl and topped with a sprinkling of sea salt, lavender seeds and blossoms for a truly pleasing botanical finish.

The restaurant is worth the drive to experience treasures from the sea prepared to please all of your senses. The grill is fired up on Wednesday through Sunday from 5 to 10 p.m. Dishes range in price from $17 to $42. There is street meter parking or $5 parking in the Encino Place complex. 16101 Ventura Blvd., Encino; (818)876-0818.