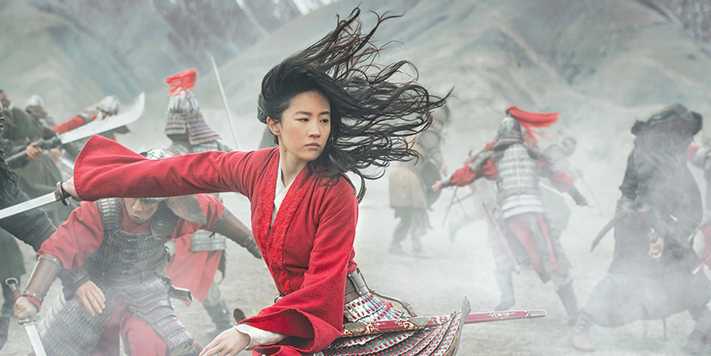 Mulan’s (Liu Yifei) penchant for rising above obstacles is entertaining, but many other aspects of the film are hard to accept. (Photo courtesy of Disney Pictures.)

To justify praising Disney’s live-action “Mulan” requires the conscious ignorance of a mob wife. A leading star’s questionable public opinions blend poorly with a film studio’s even more questionable production choices. It all adds up to popcorn entertainment at a cost more significant than Disney+’s $30 price to stream the film.

Conceptually, “Mulan” succeeds where other updated classic Disney flicks fail. In lieu of a carbon copy with three-dimensional beings gracing the screen, the story removes certain elements and adds others. Gone are the songs, shenanigans during training and Eddie Murphy’s Mushu.

This “Mulan” also downplays the gender-bending situations that create awkward moments for Mulan. In fact, the sexism in Mulan’s (Liu Yifei) rise above all obstacles don’t seem to play a major role at all. Instead, she’s strong but scared of her true potential, only held back by patriarchy.

To rationalize Mulan’s power, she’s given a superpower, chi, something her father (Tzi Ma) tells her to suppress at a young age. This places “Mulan” more firmly in the wuxia genre, alongside Chinese historical epics like “Hero,” “House of Flying Daggers” and “Crouching Tiger, Hidden Dragon,” complete with gravity-defying martial arts sequences. The primary distinction is “Mulan’s” unnecessary need to explain special abilities, especially with a toned down, Westernized depiction of chi.

This aside, aspects of the film are quite entertaining, despite a few green-screen mishaps. It’s all watchable, enjoyable without applying much critical interrogation. But oh boy, the list of ethical dilemmas behind the scenes, coupled with its approach to Chinese representation paints a picture only Dorian Gray can enjoy. The avalanche began in August 2019 when Liu voiced support for the Hong Kong police against pro-democracy protests.

The next challenge became apparent once the film premiered. While this major project was filmed by a women – in fact, it was the most expensive project helmed by one – the final product by director Niki Caro (“The Whale Rider”) is safely Disney at the expense of Chinese representation. Film Freak Central’s Walter Chaw provides a better explanation of the problem in his personal review of “Mulan.”

“I see in it the way white Americans see me: accented, mystical, bound, some would say hobbled, by notions of honour, drowned in centuries of arcane history and hipster appropriations of ancient concepts like ‘chi,’ for instance, kung fu for another,” he writes. “I am seen, if I am seen, by white Americans as this collection of half-formed impressions and the vague notion of ineffable otherness.”

The problems have now entered the third act, coming full circle: one of “Mulan’s” shooting locations occurred in Xinjiang, a region known for imprisoning 1 million Muslim Uighurs in “re-education” camps. More so, a problematic “special thanks” sneaks into the credits for the “publicity department of CPC Xinjiang Uyghur Autonomy Region Committee.” That’s the region’s propaganda division earning a thumbs-up from the House of Mouse. Should we keep going? Sure. Any semblance of drag in the 1998’s “Mulan” dissipates here. By today’s standards, such misadventures in gender are hardly over the top. At the time, however, they managed to anger columnists like Deseret News’ Marianne M. Jennings.

“The most profound moment in the movie came from the 4 year old in front of me when he turned to his mother and asked, ‘is she a girl or a man now?’” she wrote in 1998. “How proud Walt would be to know his legacy now is confusing kids about gender!”

And let’s not forget Vice President Mike Pence’s 1999 op-ed attack on the “mischievous liberal” at Disney responsible for creating “Mulan,” which supports the “bad idea” of “women in military,” he said. The animated “Mulan” explored topics in more pressing (albeit still safe) ways, while this one caters to Chinese censors in hope of gaining a larger global audience. That shouldn’t sit well with any of us. We might be tempted to call this all how to do business in a global village, but a conglomerate of Disney’s size need not normalize human rights violations. If only “Mulan” could be enjoyed despite all this. Donnie Yen, as Commander Tung, and Jet Li, as the Emperor, are incredible talents. But this is not the way.

What’s worse: some haters disparage “Mulan” calling it woke, the product of social justice warriors, blah, blah, blah. Their hate is rooted in what should be the film’s strength. In contrast to naysayers complaining about forced representation and agendas (the most hypocritically invoked term in pop culture), we do need concerted efforts to create more Asian-lead projects.

You wanna call that forced – preaching instead of telling a story – then get to know your film history. Was it forced or natural when John Wayne played Genghis Khan? How about more recent examples: the whitewashed leads of “The Last Airbender” or “Ghost in the Shell’s” Scarlett Johansson as the cybernetic body of a Japanese women, a tactic similarly employed in Netflix’s “Altered Carbons.”

The truly forced efforts to remove Asian characters from major roles is chilling. Add to that resistance to letting Asian filmmakers tell their own stories in Hollywood. “Mulan,” a victory in some ways with enough apologists to garner 76% fresh score on Rotten Tomatoes, only provides a veneer of progress, as long as we passively interact with our screens.

VINTAGE: Remembering the victims of 9/11