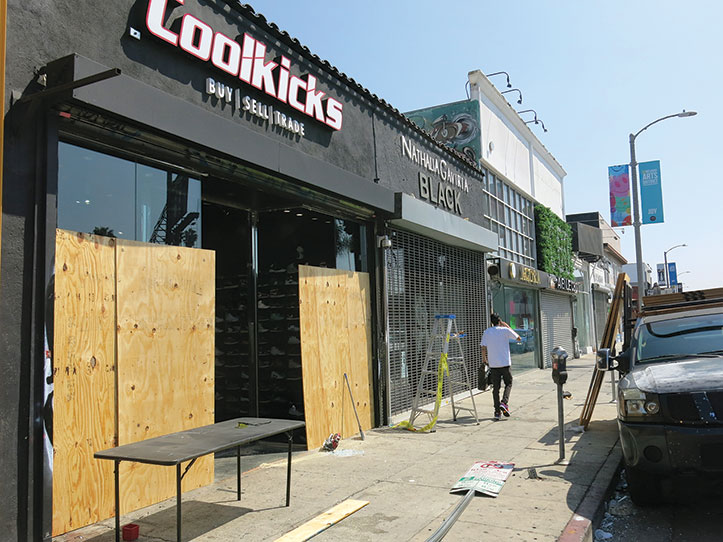 The facade of CoolKicks on Melrose Avenue was partially boarded on Tuesday after a man allegedly driving a stolen vehicle crashed through the front of the store, backed out and fled. (photo by Cameron Kiszla)

A man who allegedly carjacked a female victim in Venice on Aug. 30 was arrested the following day after the stolen vehicle crashed through the front of a shoe store on Melrose Avenue.

The suspect, David Park, 35, of La Palma, was arrested at approximately 8:55 p.m. on Aug. 31 a short distance from the collision scene at CoolKicks, located at 7565 Melrose Ave. He was booked for carjacking and bail was set at $800,000, said Los Angeles Police Department spokesman William Cooper.

The alleged carjacking occurred at approximately 10:05 p.m. on Aug. 30 near the corner of Lincoln Boulevard and Warren Avenue, in the LAPD’s Pacific Division. Detective L. Jurado described it as a violent crime in which the suspect allegedly approached a woman in a vehicle, forced her to get out and then drove away. The assailant was allegedly armed with a stun gun, Jurado said.

Police were searching for the stolen 2013 Nissan Rogue until officers from the LAPD’s Wilshire Division received a call about the crash at CoolKicks, which specializes in collectible sneakers. Prior to the crash, the suspect allegedly went into the store and attempted to sell shoes, but was acting strangely and was told to leave, Jurado said. Investigators believe he crashed through the store because he was angry, Jurado added.

Nothing was stolen following the collision. The suspect backed the vehicle out of the store and drove a short distance to the 700 block of North Fairfax Avenue, where he abandoned the car, Jurado said. The suspect then walked back to the store, where witnesses identified him and officers took Park into custody.

Anyone with information about the carjacking or collision is urged to call Jurado, of the Pacific Division, at (310)482-6313.