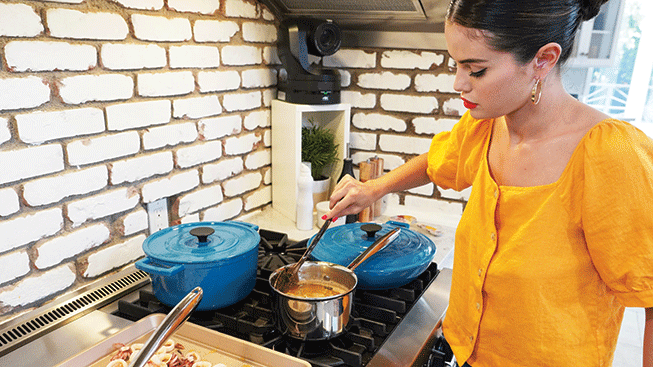 Quarantine sent film and television into a weird kind of limbo — previously renewed shows now canceled and delays for everything. But one thing is eternal: reality TV. Somehow the same genre that elevated a dope to the Oval Office now offers up a delicious series to quell our appetites, both for escapism and a good meal.

“Selena + Chef,” featuring the misadventures of Ms. Gomez in the kitchen, isn’t even the first quarantine cooking show. But unlike the Food Network’s “Amy Schumer Learns to Cook,” this one’s a tad more polished and structured. In lieu of improv comedy, the humor relies on blunders. At least Schumer could mix drinks; Gomez can’t locate a proper bottle opener.

Sure, she might know her way into the hearts of tweens and tweens at heart (insanely catchy ballad “Lose You To Love Me” deserves all the praise), but the former Disney star never learned her way around a kitchen. What better time to remedy that than during a pandemic, quarantining with a couple friends and grandparents?

Instead of a reality show designed to make us feel superior to vapid people, “Selena + Chef” presents a relatable premise: learning to cook with that all that unexpected free time (if anyone can explain “free time” to a parent of twins, please message me at donteven@hottakes.cmon).

You might recall the early days of the pandemic — more than 1,000 years ago, by my count — a flour shortage accompanied all those empty racks that once housed TP. A new generation of aspiring bakers, chocolatiers and cooks emerged ready to master the perfect ganache or simply spruce up dinner with Chrissy Teigen’s 2016 cookbook.

But celebs hobby different than the rest of us muggles — no need for the ancient wisdom of Childs or Stewart on static pages. Gomez can beam the trendiest chefs into her Encino mansion to walk her through recipes, simple and complicated.

The series’ editors poke fun at her unschooled methods with high-tech graphics like a circle or arrow signaling something Gomez does wrong.

Add to that dangerous cutlery techniques, squeamish reactions to handling a whole chicken and appliance illiteracy. But as chef Gusteau once said, “Anyone can cook.”

Minus the occasional oven fire and misshaped outcomes, Gomez attacks each new challenge as a curious padawan, an inquisitive squire accepting the escalating demands by degrees. All this occurs without tiresome drama or oversaturated production that falsely heightens each episode’s stakes.

Gomez needs not such things. She’s just absurdly charming when she discusses upcoming projects, drops subtle digs about exes (only one comes to mind though) and pokes fun at her own inadequate knowledge of culinary arts, something all chefs acknowledge in their special, occasionally comical, ways.

As any student knows, teachers across the same discipline approach the same topic differently. Ms. Gomez learns this the hard way. Ludo Lefebvre (Trois Mec and Petit Trois, both on Highland Avenue) cares little about alleviating stress when a French omelette and cheese soufflé are on the line.

Some guests handle their screen time with the actor-musician more gracefully. Roy Choi, who works closely with Jon Favreau in Netflix’s “The Chef Show,” walks Gomez through some incredible street tacos without missing a beat, though he takes a moment to mention how her songs scored points raising his daughter.

Gomez doesn’t embark on this journey alone. Roommates and BFFs Liz Golden and Raquelle Stevens wander across several of the cameras placed around the kitchen and portions of a neighboring room, while grandparents Debbie and David Cornett provide the necessary snark only family can provide.

I’m not convinced Gomez and Co. have futures as food critics, since every meal earns a verbal five out of five (I’m sure each meal rocked). Then again, dipping raw cucumber slices in pineapple guacamole is an oddity too far, despite chef Angelo Sosa’s sweet-salt-sour thesis. Still, Gomez rightly shuts down white chocolate shavings atop that guac.

Each of the 10 episodes includes a $10,000 donation to a charity of the featured chef’s choosing, and simple recipes are available on the show’s HBO Max page.

This is feel-good viewing that’s best meant to serve as a tutorial on creating fine dining. More than that, it reminds us all that folks as good hearted as Selena Gomez deserve more attention, so prepare yourselves for season 2.