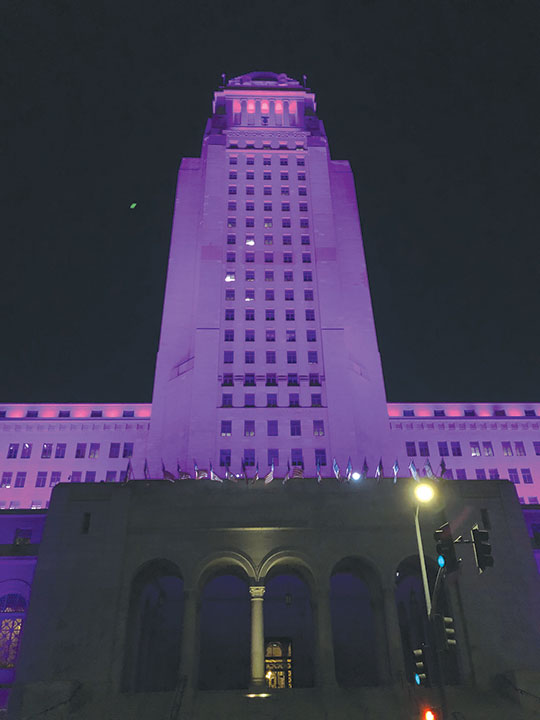 Los Angeles City Hall was lit in purple to call attention to the fight against drug abuse and reducing the stigma about overdoses. (photo courtesy of Juli Shamash/Moms Against Drugs)

Los Angeles City Hall was illuminated in purple on Aug. 31 to recognize International Overdose Awareness Day, a global event held annually to raise awareness about overdoses and reduce the stigma of drug-related death. The day also acknowledges the grief felt by families and friends remembering those who have died or suffered permanent injury as a result of drug overdose. Beverly Hills City Hall and Staples Center were also illuminated in purple on Aug. 31. 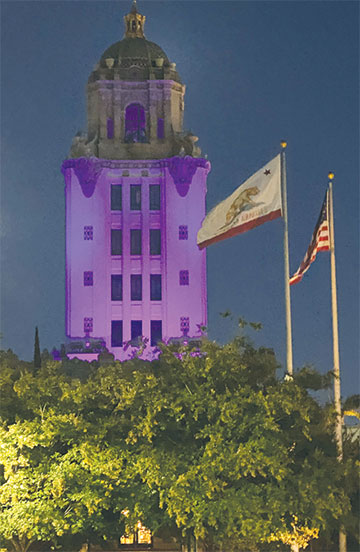 The effort in Los Angeles was led by City Councilman Paul Koretz, 5th District, who introduced a motion last week calling for City Hall to be lit in purple in partnership with the nonprofit Moms Against Drugs. The organization was co-founded by Juli Shamash and Debi Nadler, who lost sons to drug overdoses.

Moms Against Drugs promotes drug abuse awareness and overdose prevention, and provides resources and support for people to host awareness events in their communities. They also oversee groups for siblings and fathers of those who have lost lives or suffered from overdoses.

“No family is immune to the devastation of drug addiction and far too many suffer the heartbreak of losing loved ones to overdose. Addiction and overdose affect people of all races, religions and socio-economic status,” Koretz said. “Particularly during the coronavirus pandemic when so many are isolated, scared and lonely, lighting up Los Angeles City Hall purple should serve as a beacon of love and support for families and friends, and those fighting addiction, that you are not alone and that help is available.”