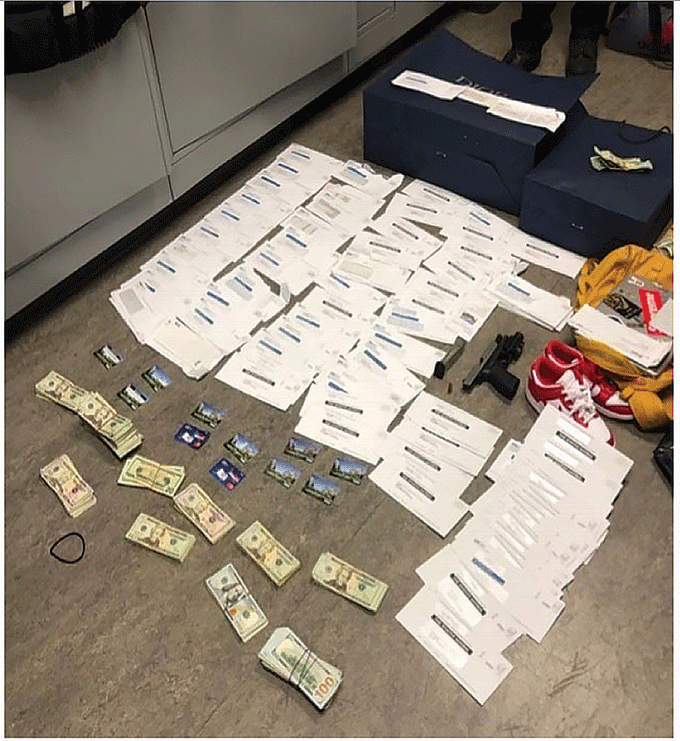 Nearly 130 fraudulent EDD credit cards have been recovered, according to the BHPD. (photo courtesy of BHPD)

The Beverly Hills Police Department has arrested at least 44 individuals since Sept. 3 allegedly responsible for EDD fraud and identity theft. Officers have recovered 129 fraudulent EDD credit cards valued at over $2.5 million, and more than $289,000 in cash from the suspects. Seven handguns were also confiscated from the suspects or their vehicles.

“There are millions of tax dollars being spent fraudulently as a result of this trend,” BHPD interim Chief Dominick Rivetti said. “The Beverly Hills Police Department is also working closely with our business community to keep them well informed of this trend in an effort to mitigate these crimes within our city.”

Investigators with the West Hollywood Sheriff’s Station and Los Angeles Police Department have also reported an increase in EDD fraud. In West Hollywood, a suspect allegedly involved in a shooting near Melrose Avenue and Huntley Drive on Sept. 11 was found to be in possession of evidence connecting him to the fraud when he was arrested, said Lt. Bill Moulder. While he did not know the total number of cases logged in West Hollywood, Moulder said it is a growing problem.

“There has absolutely been a big uptick,” Moulder said. “Mostly, our deputies are finding these fraudulent cards with someone else’s identity when they make contact with suspects. The identity theft is also being reported to us. We have two detectives dedicated to working on EDD fraud.”

Perpetrators of the fraud steal other peoples’ identities and apply for unemployment benefits from the state of California, Moulder said, and they often use the addresses of vacant houses, properties for sale or short-term rentals when applying for benefits. Other times, they use the legitimate addresses of victims and attempt to steal mail, he added. Once approved for unemployment benefits, money is loaded onto debit cards that are mailed to the individual who applied.

The value of the debit cards varies but can be up to $20,000. Cardholders can withdraw up to $1,000 per day, per card, police said. Los Angeles Police Department, Los Angeles County Sheriff’s Department and Beverly Hills Police Department officials said many of the suspects police have arrested have allegedly traveled to California from out of state to obtain the fraudulent EDD cards.

LAPD authorities have experienced such a significant increase that the department’s Commercial Crimes Division is investigating the cases, as opposed to detectives at local police stations. Local authorities have partnered with the California Highway Patrol, United States Secret Service, U.S. Postal Inspector’s Office, U.S. Department of Labor and the Internal Revenue Service to address the crime trend.

“It’s a statewide problem that is going on actively,” said Detective B. Calicchia, with the LAPD’s Commercial Crimes Division. “We put out a crime bulletin and are warning people to be aware of this. Specifically, if you start getting mail from the EDD and didn’t apply or it is in other people’s names, notify police.”

The EDD announced on Sept. 19 that it has implemented a two-week “reset period to help expedite new claimant payments, reduce fraud and tackle backlog issues moving forward.” According to an EDD statement, the department has a backlog of 600,000 claims to be processed and more than 1 million claims in which individuals received initial payment but have since modified their claim and are awaiting approval for the changes from EDD.

To prevent fraud, the EDD is implementing ID.me, a new identity verification tool that will require people to upload identifying documents as well as a photograph of themselves. EDD staff will validate claims using multiple data sources.

People applying for unemployment benefits for the first time during the two-week reset period will be directed to a temporary webpage where they can submit personal information. EDD will process those claims when the new system is ready and new claims will be backdated to cover the reset period. Eligible claimants will receive their first payment within 21 days, as if they had submitted a claim during the reset period.

Authorities from law enforcement agencies in the local area urge people with information about EDD fraud or who believe their identity has been stolen to call the BHPD at (310)285-2125, the West Hollywood Sheriff’s Station at (310)855-8850, or the LAPD’s Commercial Crimes Division at (213)486-8430.