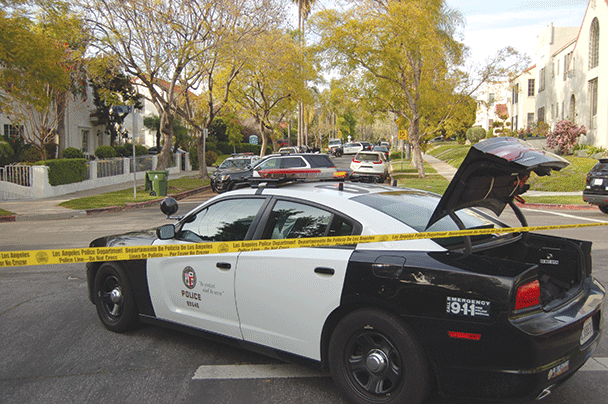 Crowds are dispersed when police receive complaints about parties, and property owners and party hosts receive citations. The city is cracking down on parties during public health orders due to the coronavirus. (Park Labrea News/Beverly Press file photo)

Large disruptive parties at houses in the Hollywood Hills held in violation of public health orders have received much media attention, but the gatherings are also occurring in the Los Angeles Police Department’s Wilshire Division and have prompted a tougher approach by law enforcement in that area.

Capt. Shannon Paulson, commanding officer of the Wilshire Division, said she is aware of six to eight properties where complaints were logged, and officers were sent to disperse party-goers in recent weeks. She added that some of the parties have been held at short-term rental properties, while others were hosted by property owners.

“We are finding that some of them are properties that are up for sale, and real-estate agencies engage with management companies who, in the interim, rent them out. Some are done directly by the owners themselves and some are done through Airbnb,” Paulson said.

The parties were mostly held at properties in the Melrose District, but Paulson declined to give specific addresses or street names because citations have been issued and are currently in the administrative process.

She said at least two properties have received two warnings. If officers find parties occurring at those sites again, additional citations will be issued and property owners or others hosting parties may face prosecution and fines.

“The approach is consistent throughout the department, but we are fortunate at Wilshire that we are not seeing the magnitude of the parties in Hollywood, either by numerical instances or locations or the size of those parties that have gotten a lot of media attention,” Paulson said. “I hesitate to go into specifics because I don’t think it is appropriate to give specific addresses at this point, but we have had some repeat offenders in the Wilshire area. Some are in those central areas off Melrose. They have resulted in a variety of actions. We have given initial and final warnings per the policy to a couple of properties and we are moving on to final notice.”

Paulson said authorities are most concerned about violence at parties. Two people have been shot and killed and several others wounded at separate gatherings in the Hollywood Hills during recent weeks. Paulson said Wilshire Division officers received a call about shots being fired at a party in the Melrose District on the weekend of Aug. 29-30, but no arrests were made, no injuries were reported and the case remains under investigation. She declined to give a location, but said officers found a large party occurring at a house and determined someone may have fired a gun in celebration. No further details were available.

Mayor Eric Garcetti has authorized the Los Angeles Department of Water and Power to shut off electricity and water service to repeat offenders, although none of the instances in the Wilshire Division have risen to that level, Paulson added. Garcetti recently authorized utility disconnection at two houses in the Hollywood Hills – one rented and shared by TikTok social media celebrities Bryce Hall and Blake Gray that was the alleged site of two parties in August, and another residence located in the Cahuenga Pass where warnings were issued during at least two alleged parties. Authorities did not release the name of the owner of the property in the Cahuenga Pass.

Paulson said although the parties that officers have encountered in the Wilshire Division have had fewer people, crowds are dispersed because large gatherings are disrupting neighbors. Gatherings are also not currently allowed due to Los Angeles County COVID-19 public health orders.

“What crosses the line into law-enforcement intervention is when the party becomes a disruption,” Paulson said. “Our primary concern is it’s disruptive to the neighborhood and a violation, so there will be an effort made to disperse the crowd. That can and at times has included the use of an airship (police helicopter) to fly over the offending back yard and give warnings by a P.A. system.”

Paulson said Wilshire Division administrators maintain a list of properties where citations have been issued, and patrol officers check to ensure gatherings are not recurring. If problems persist at those sites, Paulson warned it will be documented and the information will be sent to city prosecutors.

“There is a certain amount of self-determination and responsibility here. We will take steps to address a disruption,” Paulson said. “We encourage people not to hold disruptive parties and will take measures to address them if they do.”