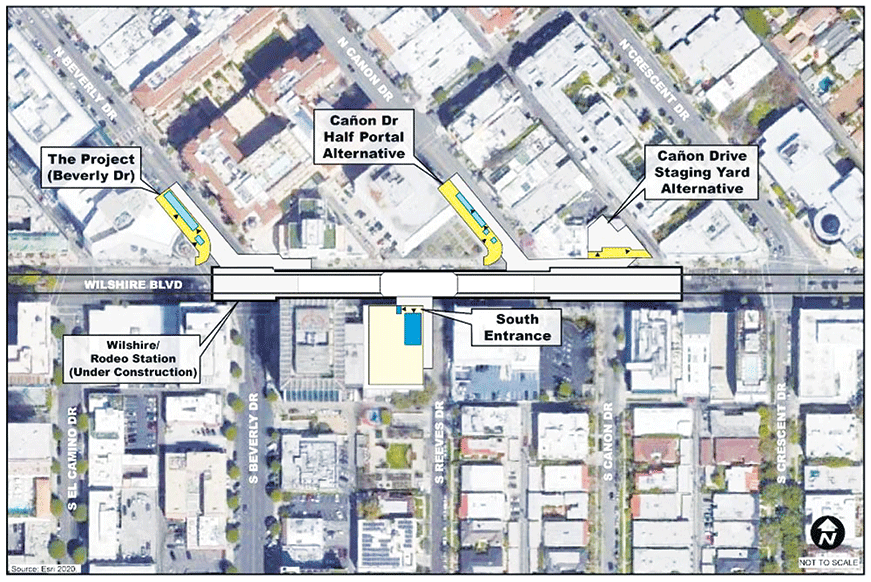 The City Council will decide where to position the north portal from three possible locations. (image courtesy of the city of Beverly Hills)

The Beverly Hills City Council moved closer to determining the location of the second portal for the Wilshire/Rodeo Metro Purple Line station during a meeting on Sept. 16. The meeting addressed questions by residents and council members about the 448-page north portal draft Environmental Impact Report. The public comment period closes on Oct. 8.

In June, the council approved a $950,000 agreement with consulting firm AECOM to complete the north portal EIR, which was made available for public review on Aug. 21 on the project website (beverlyhills.org/northportal) and delves into three potential options.

“The main need of this is providing direct access to the north side of Wilshire Boulevard,” AECOM Program Manager David DeRosa said. “Most of the impacts are less than significant with mitigation.”

For all three potential portal locations – the west side of North Beverly Drive, the West side of North Cañon Drive and the North Cañon Drive staging yard site – there would be three levels – street, landing and concourse. The street level would include an entrance/exit with two elevators, one stairway and one “up” escalator, in addition to a covered canopy above the 12-foot-tall portal enclosed by a translucent glass exterior.

“We’re talking about a hole in the ground with an escalator or two,” Councilman Julian Gold said.

The City Council and Metro reached an agreement in February 2019 to provide subway users direct access to the Business Triangle on the north side of Wilshire Boulevard by creating a second portal, with the expectation that Metro would contribute 50% of the total cost of designing and constructing the portal.

During the meeting Councilman John Mirisch characterized Metro’s original plan to have just one portal for the Wilshire/Rodeo station as a “fatal design flaw.” Metro’s selected preferred station entrance location on the south side of Wilshire Boulevard at Reeves Drive provides subway access for people exclusively in the south side of the city.

Per the Sept. 16 staff report, the primary objectives of the north portal project are to “provide direct access from the north side of Wilshire Boulevard to the Wilshire/Rodeo Purple Line Station; provide direct pedestrian access to jobs, retail and amenities in the business triangle; improve pedestrian flow and avoid significant degradation of vehicular flow in the vicinity of the Wilshire/Rodeo Purple Line Station; [and] minimize pedestrian street crossings on Wilshire Boulevard.”

Absent from the staff report was information related to the inclusion of restrooms or a police substation, despite previous community concerns that resident safety was not being sufficiently considered in choosing to locate a subway station in a residential area.

According to the draft EIR, the Canon Drive staging yard alternative is the only option that would be able to include public restrooms (two separate stalls/rooms). In addition, that location would also provide sufficient space to accommodate a second escalator if a small below-ground portion of the adjacent parcel to the west were utilized, according to the draft EIR.

Beverly Hills Historical Society Founder Phil Savenick, one of five people to voice their opinions during the public comment period, emphasized the need to have adequate police in the area.

“We really want to have a visible security presence wherever the portals are so every single person getting off the subway sees there’s video and police presence there and they know we are watching them,” he said.

Although not in attendance at the meeting, Beverly Hills interim Police Chief Dominick Rivetti said that BHPD would be able to handle whatever changes result from the subway opening in the city.

“The new Metro station will bring additional visitors and pedestrian traffic to Beverly Hills. We will accommodate this demand with increased staffing and resources to ensure the safety of the entire community,” he said.

Gold, who emphasized the need to have a “robust” conversation with all stakeholders before anything is finalized, called the presentation a “bit deceiving” given that the council had expected to be presented with details about a variety of services that could be provided within the portals, such as bathrooms.

Mirisch voiced concerns about including bathrooms as part of the station, as he has in the past, noting that their existence could actually increase traffic.

“I think it’s really important for us to think of what is the best location long-term for the north portal. That to me is, just from a geographic perspective, obviously the Beverly portal,” he said.

The footprint for the Beverly Boulevard option would be approximately 9,200 square feet and extend from Wilshire Boulevard to approximately 165 feet north up North Beverly Drive.

In moving forward with that option, eight to nine on-street parking stalls (including valet and bus loading) would be removed for installation of the portal south of the crosswalk at Beverly Canon Gardens, with drop-off and pick-up needing to occur north of the crosswalk, prompting the removal of up to 14 total parking stalls on Beverly Drive. This location would require closing Beverly Drive between Beverly Cañon Gardens and Wilshire Boulevard for approximately three years for construction, which would start in 2022.

The Canon Drive alternative would include a half portal located across approximately 8,100 square feet on the west side of Canon Drive, within the existing street and sidewalk right-of-way, north of Wilshire Boulevard. In moving forward with this option, 10 to 11 on-street parking stalls (including valet) would be removed for installation of the portal south of Clifton Way. Drop-off and pickup would need to occur both north of and on Clifton Way, prompting the removal of an additional five parking stalls (two on Canon Drive and three on Clifton Way) totaling up to 16 parking stalls removed. This location would require closing Canon Drive between Clifton Way and Wilshire Boulevard for approximately three years for construction, which would start in 2022.

The footprint for the Canon Drive staging yard alternative would be approximately 3,800 square feet and would be located within the construction staging yard established for the project, as well as the adjacent sidewalk located along Wilshire Boulevard and the north-south alley between Canon and Crescent drives with fewer parking stalls needing to be removed due to the existing configuration. Construction on this option, which would also include an approximately 52-foot-tall ventilation shaft at the southeastern corner of the site, could not start until 2024 after certain construction activities for the Wilshire/Rodeo station are completed.

“Unfortunately, the North Portal EIR gets an ‘F,’” Savenick said after the meeting. “There is no actual station, no branding, no parking, no passenger off-street loading, no security, no bathrooms, no visitor or way-finding center. They have presented choices of three holes in the sidewalk, parking is sacrificed as is the whole street for several years of construction.”

Lazaroff voiced concern that the loss of valet parking options would negatively harm her restaurant’s operations. In fact, several restaurants’ valet operations would be impacted depending upon which portal option the council ultimately chooses.

“If businesses are not able to survive because we picked a location that closes them off, that will certainly have a significant environmental impact,” Mayor Lester Friedman said. “I certainly see the nexus between the economy of it and affecting the environment, so I would also be interested in some sort of analysis of that.”

According to the draft EIR, all three proposed sites appear to have essentially the same environmental impacts.

“I don’t think it would be appropriate to come to any conclusion on any item until the public comment period has been completed,” Friedman said.

Depending on the volume of comments received, City Council selection of the north portal preferred station location and certification of the final EIR is expected to occur on or after Oct. 27.