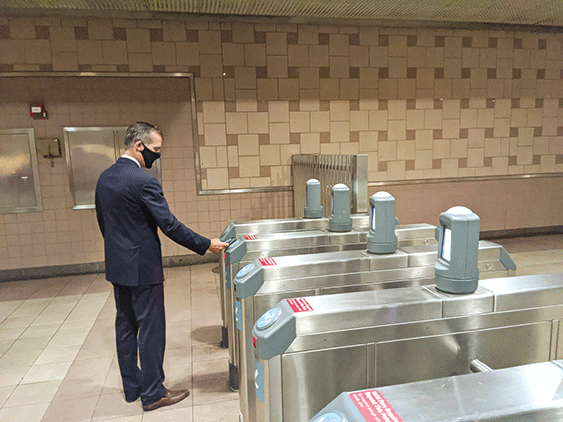 “We have to eliminate barriers between our transportation system and our essential workers, front line heroes, hard-hit households and Angelenos from every neighborhood, community and zip code. This is always important, but even more critical in this current crisis,” Garcetti said. “The new mobile TAP app makes Metro one of the first transit agencies in the country to put the power to pay your fares in the palm of your hands – tapping into our city’s innovative spirit to bring greater safety, equity, sustainability and convenience to riders, drivers, transit operators and anyone riding our trains and buses.”

Riders who download the app can pay fares for trains and buses by holding their device near a TAP validator without using Face ID, Touch ID or waking the device. Metro patrons will be able to add fare payment using Apple Pay on their phone, removing the need to physically interact with a TAP vending machine at Metro stations. An Android version of the app is currently being developed for implementation later this year.

“In the midst of the COVID-19 pandemic, this new feature offers a great option for essential workers, honors social distancing with no bus operator interaction needed by the rider, and works on all TAP participating agencies, whether riders board at the front or at rear doors,” Metro CEO Phillip A. Washington said.

Riders will be able to add their TAP cards to their Apple Wallet in addition to the TAP mobile app, which allows for simple account management, regional trip planning and access to all Metro passes including Metro Bike Share. The TAP app supports Metro’s subsidized transit pass programs, including Reduced Fare and Low Income Fare is Easy, as well as cash payments through the Pay Near Me service.

“With TAP cards now available on iPhone and Apple Watch, those in Los Angeles using public transportation have a safe, secure and extremely convenient way to pay for their bus or train fare,” said Jennifer Bailey, vice president of Apple Pay. “By simply placing their Apple device near the TAP dial, Metro riders can quickly board and avoid touching vending machines – all while keeping their transaction information private.”