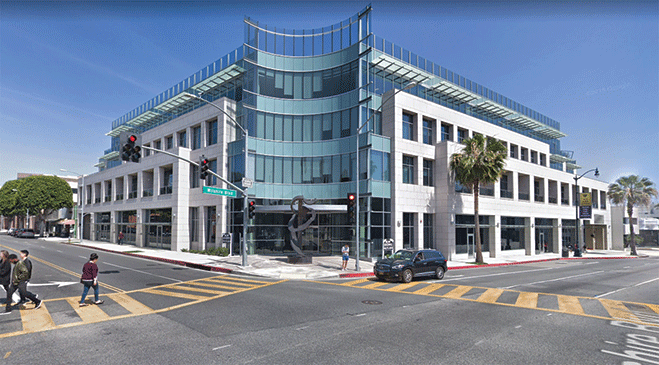 The medical office space at 8767 Wilshire Blvd. has been the only recipient of a medical-use overlay zone in Beverly Hills since 2011. (photo courtesy of Google Maps)

On Sept. 15, the Beverly Hills City Council informally agreed to revisit regulations on medical offices and consider changes that would make it easier for commercial space to be used for medical purposes.

The move is intended to assist commercial landlords and the city of Beverly Hills, which is facing budget cuts due to COVID-19 but would benefit from the taxes paid by those landlords and the businesses they lease to. Since the pandemic-related shutdown began in March, some commercial tenants who cannot pay rent have been protected by an eviction moratorium by the city of Beverly Hills, and others have moved, suspended operations or closed, leading to struggles for commercial landlords.

In order to act quickly, the council members agreed that changes are likely to come first through an urgency ordinance that will be considered at an upcoming council meeting. The urgency ordinance could remain in place for up to a year, followed by a permanent ordinance, which would need to go through the city’s regular process of review and development by the Planning Commission, then formal adoption by the council.

“It’s really not possible to do a Planning Commission-type ordinance in anything less than four to six months,” said Ryan Gohlich, the city’s assistant director of community development.

Councilwoman Lili Bosse said the timeline for a full ordinance is too long.

“We’ve heard from many landlords and tenants requesting the change, and I think we need to do it yesterday,” Bosse said.

“This is really an economic sustainability issue. How do we maintain businesses within this city in an environment that’s changing? … I’m concerned that if we take six months to get this done, I don’t know what’s going to happen to the commercial base of this city in six months,” Councilman Julian Gold added.

In 2011, the city asked medical buildings to register with the city, and while those that registered can add limited additional space without needing a zoning change, the medical spaces that did not register are considered legally nonconforming.

Even without the addition of many new offices, Councilman John Mirisch noted that the medical industry thrives in Beverly Hills. According to Gohlich, more than 20% of the city’s commercial space is used for medical purposes.

If that number were to grow too much, businesses in other industries would likely have trouble finding an affordable space in Beverly Hills, Mirisch said, and the city should not give up a “balance of uses” for its commercial space by acting “in a knee-jerk way.”

“If we make a short-term fix, what we’re doing is after the pandemic, we’re making it more difficult for other businesses to establish themselves,” Mirisch said.

Mirisch proposed that there be a cap on how much general commercial space be converted to medical use under the urgency ordinance, though the details of that proposed cap are likely to be debated during the future council meeting.

In addition, Mirisch noted, if changes were made to allow medical uses on the ground floors of commercial buildings, that could take up valuable street-facing space without serving pedestrians and neighbors like restaurants, coffee shops and retail stores do. Ground-floor space on major streets will be valuable as they are a focus of “Connect Beverly Hills: Meet Me on Wilshire and La Cienega,” the city’s efforts to revitalize commercial corridors and pedestrian activity in preparation for Metro’s Purple Line Extension subway stations, which are expected to open in 2023 and 2025, according to Metro.

Mirisch suggested that more information is needed before any changes are made, and city staff is expected to do more research before returning to the council at a future meeting to discuss the terms of an urgency ordinance.

“Before we do anything that has the potential to change, so to speak, the geography of our city in that way, I think we need to get all the statistics and get our facts,” Mirisch said.

Vice Mayor Robert Wunderlich agreed that the council needs more information on some topics, such as the impact of traffic and parking for medical offices, before it makes a decision.

Mayor Lester Friedman agreed with Bosse and Gold that waiting too long could make the changes less effective, but he also agreed with Mirisch that doing too much could create unintended consequences. He suggested that the changes to medical use of commercial space could be confined to “limited areas in which it might be OK.”

“I think we need to be careful not to over-correct, but we do need to correct,” Friedman said.

The council also briefly discussed changing the way medical-use offices are taxed, though some council members said that consideration could make the discussion about commercial spaces too complicated. In addition, while the council has the power to lower taxes, any tax increase has to be put to the voters.