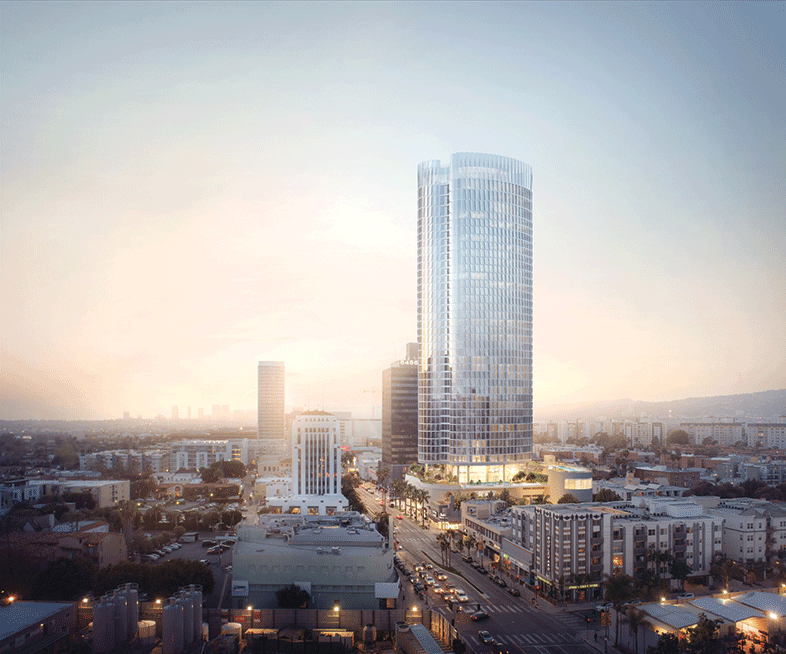 The 42-story Mirabel is expected to open in 2024, pending approval by the Los Angeles Planning Commission. (rendering courtesy of Walter N. Marks Inc.)

In his presentation, Marks focused on the neighborhood impact of the Mirabel, a mixed-use building that will create up to 348 units, including 38 affordable units, 29 of which will be for very low-income households and nine of which will be set aside for moderate-income households. The affordable units will have access to the building’s luxury amenities, such as a bowling alley and virtual-reality room.

“They’re going to be beautiful units that these families are going to live in,” Marks said.

The approximately 477,000-square-foot building at 5411 Wilshire Blvd. will also preserve the Art Deco structure known as the Sontag Building at the corner of Wilshire Boulevard and Cloverdale Avenue, and it will include more than 39,000 square feet of open space and nearly 15,000 square feet of commercial space on the ground floor.

“We plan to have a coffeehouse with outdoor seating, as well as indoor seating, in a way to sort of blend and not just make the lobby a private space. The lobby becomes a public space,” Marks said.

Marks touted the 395 residential parking spaces that will be able to charge electric vehicles each night as the sustainability aspect of the project. In addition to encouraging the use of electric cars, the Mirabel will host a company that provides vehicles that can be rented for short-term trips, allowing more people to use a car when necessary but otherwise not need to own one. Residents will also be able to use the nearby Wilshire/La Brea subway station, which is part of Metro’s Purple Line Extension and is expected to be finished in 2023, the year before the Mirabel is expected to open.

“We’re by the subway stop, we have a great bus line … We need to use those, because the only way we’re going to get congestion reduced in our city is if a few of us – most of us, if possible – drive less,” Marks said.

Several people submitted questions and several others appeared virtually to ask Marks questions about the Mirabel, declare their support for Marks’ plan or express their concerns. One vocal critic, Noah Hass-Cohen, said the Mirabel will negatively affect the Miracle Mile and those who call it home, an assertion Marks disagreed with.

Addressing some of the concerns that have arisen online and in some of the questions, Marks said his project is not expected to raise rents nearby, as many of the buildings are covered by the rent stabilization ordinance in Los Angeles, which caps rent increases each year according to the Consumer Price Index.

Marks added that he hopes the Mirabel will lead to a revitalization of Wilshire Boulevard in the area.

“I think when we put in the new restaurants and the new retail shops and new dollars on the ground level, it’s a forward-moving advancement toward what we all want on our street … a walkable neighborhood,” Marks said. 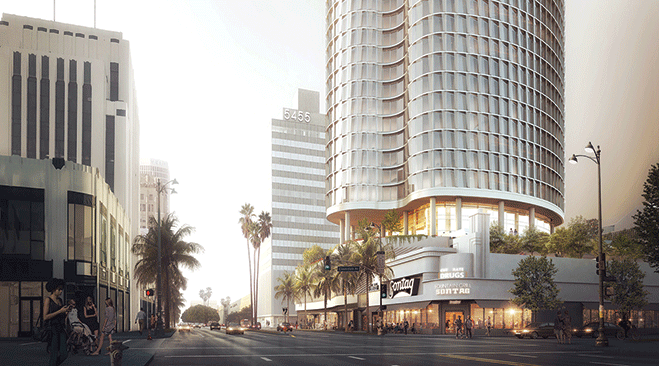 Molly Basler, a candidate in the 2022 race for Los Angeles City Council District 5, said the project does not do enough to be environmentally friendly, arguing that “it’s not enough to have parking with electrical charges.”

Marks pointed out that his building will be certified according to the WELL Building Standard, which aims to support human health and wellness, much like the LEED Certification measures a building’s environmental friendliness. The Mirabel will improve air and water quality for its tenants, Marks added, and the efforts to reduce fossil fuel-powered car usage by tenants will improve air quality and other climate change-related issues.

“I actually think this is a 21st century building that speaks exactly to your concerns, Molly,” Marks said.

Other criticism involved the building’s height, which Marks said was intended to limit the impact on the surrounding neighborhood.

“We’re able to build so many units, and when we studied the project, we were going to build a shorter, fatter, squattier building … but the shadow it cast on the neighborhood north of us would be gigantic,” Marks said. “When you get into this type of building, it’s all about the view, having an elegant building with world-class architecture. When we look at the height and the incentives for affordable housing, we get into this number of stories.”

Marks said critics and supporters of the project will have multiple chances to make their voices heard. The next step for the project will be a meeting with a case hearing officer prior to appearing before the Los Angeles Planning Commission. A date has not yet been set, but Marks said if all goes according to schedule, construction can begin in about 18 months. Construction is expected to last approximately three years before opening in 2024.

Marks said he hopes to meet with the Miracle Mile Residential Association in October, and he and his team are soliciting feedback on the project at 5411wilshire.com.

“Folks don’t have to wait for a meeting to talk to us … whatever it takes to hear what the issues are,” said Andrea Conant, a consultant working with Marks on the project.