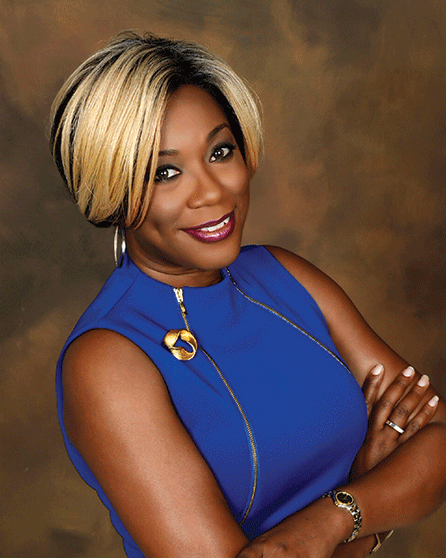 Christopher Street West, the nonprofit that puts on the annual LA Pride Parade and Festival formerly held in West Hollywood, has appointed Sharon-Franklin Brown to serve as its next president.

Brown, who was a member of the organization’s board of directors prior to her selection as president, began serving in her new role on Sept. 2. She is the first a Black transgender woman to serve as president of CSW.

“Plain and simple, Sharon is the best person to lead our organization,” said Noah Gonzalez, who serves as vice president of the board, in an email. “We are incredibly lucky to have a leader like her take us into the next chapter of LA Pride. She has the professional experience and knowledge that we need to make important changes, as well as highlight opportunities that the organization can support to engage our community further. Her work in advocacy and who she is as a person only further confirm why our choice was easy in electing Sharon as our next president.”

In an email, Brown said she wants to emphasize “diversifying the board, and evolve inclusion to a level where everyone from our community has a sense of belonging and, more importantly, input.” The board plans to have its executive committee meet weekly, instead of monthly, in order to “strategize the organization’s efforts in supporting our Los Angeles LGBTQ+ community, as well as efforts to empower our sibling organizations locally and across the country,” Brown said.

“One of my top priorities will be to work with our new leadership team to be proactive in our engagement within the community throughout the entire year,” Brown said. “There are so many incredible LGBTQ+ organizations here in Los Angeles doing the tough and needed work. I want us to support that programming that already exists, as well as future opportunities that develop from new conversation that builds and allows for safe spaces for our community. This is what LA Pride has always been about.”

Brown replaces Estevan Montemayor as president. Montemayor was not made available for comment, but Gonzalez said Montemayor, who serves as deputy chief of staff for Los Angeles City Councilman David Ryu, 4th District, always planned to leave after the Pride 50th anniversary celebration this year, which was disrupted by the coronavirus pandemic, so he could “be focused on his work on the 2020 election.”

“As the outgoing president, he helped champion Sharon into her newly elected position,” Gonzalez said.

In July, CSW announced that LA Pride would be leaving West Hollywood, starting with next year’s celebration. In an open letter the CSW board sent to the West Hollywood City Council, the board cited “construction in West Hollywood Park, the changing demographics of Greater Los Angeles, our commitment to being responsive to the LGBTQIA+ community’s needs, and our allyship and collaboration with other movements for social change” as reasons for their decision.

When asked if the leadership changes at CSW will affect anything regarding LA Pride’s decision to leave West Hollywood, Gonzalez said that “at this time, we are still in discussions with our team and community stakeholders.”