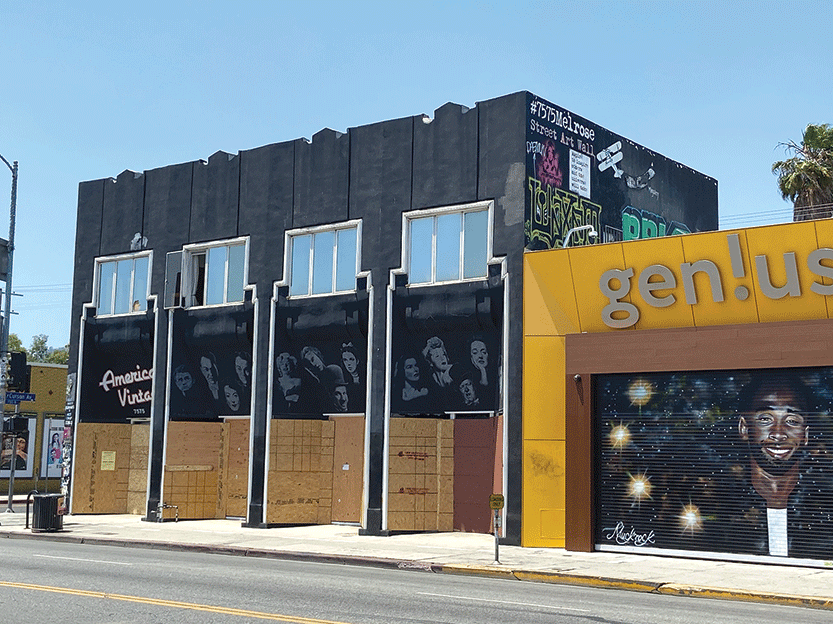 The “Uplift Melrose” plan aimed to help bring customers back to Melrose Avenue, where businesses are suffering due to COVID-19. (photo by Edwin Folven)

Councilman Paul Koretz, 5th District, has announced he will not support the “Uplift Melrose” plan, essentially ending a proposal that would have brought more sidewalk space, pedestrian amenities, bike lanes, new lighting and landscaping to a 22-block stretch of Melrose Avenue between Fairfax and Highland avenues.

The proposal was contingent upon the city of Los Angeles receiving a $31.8 million state grant from Caltrans to fund the project. The deadline to submit a proposal for a state grant is Sept. 15, but council support was needed to move forward.

Koretz authored a letter to the community on Sept. 8 stating he had done “much soul searching” about the project but decided “to not move forward with this process.”

Koretz said his primary concern was public safety and the ability of emergency responders to access the greater Melrose area. The “Uplift Melrose” project would have reduced the street to one lane in each direction, and Koretz said he worried about the effect that would have on police and fire department responses.

“The determining factor for me is public safety. The bottleneck that the reduction of lanes would create, as well as the inability to ingress and egress at critical points along the way, are likely to greatly impede the ability of police vehicles, fire engines and ambulances to respond in appropriate time,” Koretz said in the letter. “Additionally, the significant lane reduction would impact the ability to keep Melrose open should there be a requirement for an emergency response on Melrose. The presence of police and fire, whether it is an engine company or multiple police vehicles, would in all likelihood immediately close Melrose in both directions. Having received letters of great concern from both departments, as well as private conversations with leadership from these departments, I know their concerns are serious.”

“Uplift Melrose” was supported by the Melrose Business Improvement District and the Mid City West Community Council because of the economic, aesthetic and infrastructure benefits they said it would have created in the Melrose District.

“I’m not just utterly disappointed, I’m shocked. I found [Koretz’s] decision to be unconscionable,” said Isack Fadlon, a member of the Melrose BID’s board and owner of the Sportie LA shoe store on Melrose Avenue. “To reach a decision that essentially turns its back on the community is unacceptable.”

Fadlon added that it was further disappointing because the councilman’s support was only needed at this point so the city could apply for the grant to get the conceptual plan moving forward. Plans to address issues such as public safety, traffic congestion and parking could have been worked out later and the public would have been involved at every step.

Koretz cited other reasons for not supporting the plan.

“I also believe that this will result in a short-term loss of more marginal businesses during construction,” Koretz said in the letter. “Longer term, I think it is likely to raise rents once it is completed, knocking out remaining smaller businesses that give Melrose its charm, for better-funded, more chain-like businesses.”

The councilman also cited the traffic congestion he believes would occur on surrounding streets once traffic lanes are reduced to one lane in each direction on Melrose Avenue. 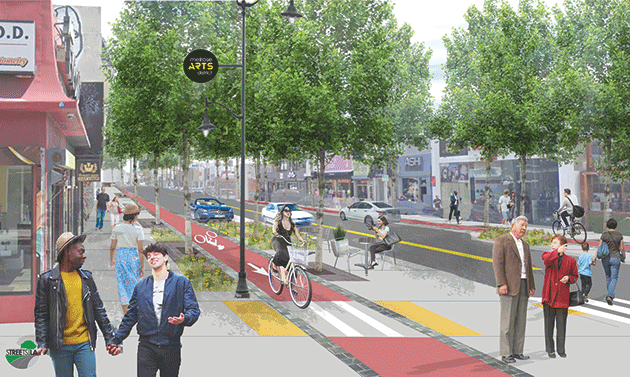 “Melrose is used to get to and from work, to and from school, to and from hospitals, and has been used as a main access route for decades. Traffic impacts related to the significant reduction in lanes could be a tragic catastrophe for residents and neighboring communities,” Koretz said. “Tens of thousands of vehicles may be displaced, thereby establishing detours and overflow onto streets that weren’t meant to handle that level of traffic.”

Pierson Blaetz, who operates the Melrose Trading Post and Greenway Arts Alliance at Fairfax High School and is also a Melrose BID board member, said there was much community support for the project, including from the business community and Fairfax High School. He said the councilman appears to have listened only to the desires of residents who oppose the project because of traffic and parking concerns, instead of business owners and other stakeholders who supported the “Uplift Melrose” project because of the benefits it would create in the Melrose District.

“I am very disappointed. There was overwhelming support for it,” Blaetz said. “If a major reason is a minority of residents around the street were objecting, I object to that. I feel like everyone’s opinion should be considered.”

“You need more than homeowners in CD5 to win as controller, Paul,” Schneider wrote in the tweet, referencing Koretz’s campaign for Los Angeles City Controller in 2022. “And progressives won’t forget this decision, nor should they.”

Opponents praised Koretz’s decision not to support “Uplift Melrose.” Many residents in the surrounding neighborhood were concerned about the plan’s potential effect on their neighborhood.

“It was the right decision, he did the right thing. It was an ill-conceived idea,” said Peter Nichols, co-founder of the Melrose Action Neighborhood Watch. “The impact was just too great.”

Richard Pink, owner of Pink’s Hot Dogs and a longtime resident of the Melrose District, supported the “Uplift Melrose” proposal but said he understands why Koretz made the decision not to support the plan.

“I think the No. 1 issue is public safety. For me, that overrides everything,” Pink said. “There are other issues, traffic overflowing on residential streets and the loss of parking, all of which I hoped could be solved. But one of my biggest concerns is public safety, and I am on board with Councilman Koretz’s decision.”

In his letter to the community, Koretz referenced a $3.9 million grant from Metro that the Melrose BID has secured that he hopes will bring some of the benefits from the proposed “Uplift Melrose” plan to the community. Specific plans for that funding have not been finalized.

“It’s hard to turn down tens of millions of dollars [in the Caltrans grant], but I believe that is the only prudent course of action,” Koretz said in the letter. “Melrose already has won a $3.9 million grant to improve safety and beautify the street. I believe a lot can be done to revitalize Melrose with these funds. Let’s all work together to make a good plan to use that money, seek other similar grants and do what we can for Melrose without causing any harm along the way.”