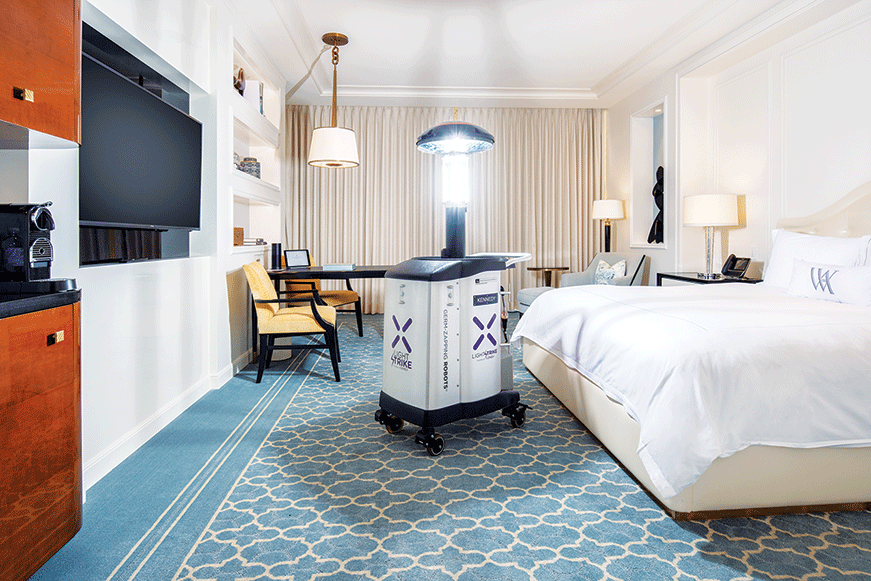 A special robot at the Beverly Hilton and Waldorf Astoria Beverly Hills takes cleanliness to the next level. (image courtesy of Oasis West Realty LLC)

While hospitality experts agree it will take years for the industry to fully rebound to pre-pandemic levels, local hotels continue to see a steady resurgence. Back in March when businesses shut down, hotel occupancy levels plummeted to single-digit occupancy, with many opting to temporarily close and furlough employees.

“It’s been a very slow, gradual recovery,” West Hollywood Travel and Tourism Board CEO Tom Kiely said. “We have seen our hotels in West Hollywood continue to expand occupancy about 1% a week, and right now, we’re up to around 30% occupancy, which is an improvement and it’s continually going in the right direction. However, it is significantly below where we were a year ago at this time.”

Kiely said that in 2019, West Hollywood hotels enjoyed 78% to 92% occupancy. Of the 21 hotels in the city, just five stayed open the entire time amidst the pandemic, running in the low-single-digit occupancy. Come Nov. 1, when the Standard reopens on Sunset Boulevard, a month after the West Hollywood Edition a mile west on Sunset Boulevard reopens on Oct. 1, all of the city’s hotels will once again be open.

“We, like almost every other destination in the U.S., are really attracting local and regional visitors because people feel safe getting in their car and driving to a hotel where they’ve got some space and some security and privacy and can get away from home and have a relaxing vacation,” he said, noting that the “vast majority” of visitors are coming from Southern California. “It’s really about, you just need a change of scenery.”

Kiely said that most visitors are booking hotels within one week of arrival, with about half booking their stay just a day or two before arrival.

For the La Peer Hotel, General Manager Nick Remedio said he chose to remain open because he believed that hotels that didn’t close would have the best chance of recovering faster. In addition, he said he felt a “primary responsibility” to the employees who had been temporarily laid off and wanted to bring them back as quickly as possible.

“We still have a long way to go in terms of recovery,” he said, noting that most of their guests now come from Southern California.

“It’s definitely a drive market that we’re seeing as people are wanting to get out of the house, out of their towns, and coming to a hotel to escape for a long weekend or for four or five days,” he said.

In addition to safety measures, which include leaving rooms vacant for at least 24 hours and using an electrostatic sprayer to sanitize all guest rooms and public areas, Remedio said the keys for success during this time include having the ability to be flexible in adapting operations as well as being compassionate with both staff and guests.

“I think it’s important to keep in mind compassion and understanding,” Remedio said. “With so many people who are impacted, whether it’s families who have lost loved ones or people whose families have been significantly impacted due to unemployment, this continues to be a truly tense time and being understanding and compassionate … I think, goes a long way. It’s easy to be frustrated or lose patience because it’s been over six months that we’ve been living in this environment. But the light really isn’t at the end of the tunnel and the only way that we’re going to continue to get through it is moving forward together.” 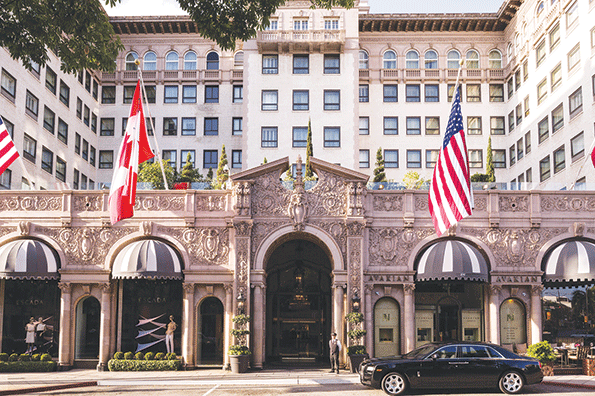 In Beverly Hills, which has the largest concentration of five-star hotels in the region, the Oct. 1 reopening of the Beverly Wilshire will mark the city’s final hotel to return to market. Of the city’s 17 hotels, just one did not survive. Last week, the Luxe Rodeo Drive announced that it would never reopen.

Beverly Hills Conference and Visitors Bureau CEO Julie Wagner said that the market continues to slowly rebound from the single-digit occupancy levels of when the pandemic hit. She said that hotels are now clocking occupancy levels close to 40% on the weekends and around 30% during the week.

“It’s been growing slowly, but I think a big part is just people are scared to travel right now,” she said. “It’s just a question of people getting their confidence back. It’s just going to take time and patience. People need to feel safe. The ray of sunshine is that Beverly Hills has been doing everything with a meticulous attention to detail for over 100 years, and that continues to be the case now.”

When the Beverly Wilshire reopens, it will feature Four Seasons’ new Lead With Care program. Done in consultation with Johns Hopkins Medicine International, the program focuses on safe care and service, in addition to enhancing procedures to protect guests while also ensuring they feel safe and reassured.

“Four Seasons’ singular goal is to provide guests and employees with the confidence and assurance that their health and safety is our first priority. This program has done just that,” General Manager Peter Humig said. “We’ve been preparing for this day for more than six months.”

Just east, at the Four Seasons Los Angeles at Beverly Hills, which has remained open throughout the pandemic, Director of Marketing Ana Cruz said the Lead With Care program has been a true boon for the hotel.

“By remaining open, we’ve been able to be one of the first properties to implement the new Lead With Care protocols at the hotel,” she said. “From a temperature check … to social distancing … to the protective equipment our staff in the back uses … to even our cooks inside the kitchen being socially distanced with all the proper PPE,” the hotel continues to take proactive measures, including offering curbside check-in.

Other measures include leaving rooms vacant for at least 24 hours, hiring a hygiene officer to ensure proper sanitization and various safety protocols, and offering guests the option of booking a private workout room. Recently, the hotel began offering massages in a “spa garden” during the weekend – a first step in once again offering more wellness options.

At the Peninsula Beverly Hills, which has remained open throughout the pandemic, modified services and luxury amenities include a revamped food and beverage program which has ignited significant demand, according to Managing Director Offer Nissenbaum. The award-winning Belvedere restaurant has been revamped as the Le Petit Belvedere, a California-style brasserie in the outdoor dining patio that is nearly always filled with reservations.

“The key in my opinion is to be safe and hygienic, but at the same time you have to create a good experience for the guest,” he said.

In addition to hiring a director of sanitation, hygiene and safety, staff use a NanoSeptic surface spray to ensure cleanliness, and there are distance dividers now at the front desk. Rooms are also kept vacant for at least 24 hours.

Like all hotels, the bulk of guests at the Peninsula are from the local area.

“It’s shifted to the drive market and staycations,” Nissenbaum said. “The majority of our business people that are within driving distance, even locally here in L.A., they just want to get away. Our pool is open. Our cabanas are open. Our restaurants are open. Room service is open. So you can actually have an experience in the hotel.”

According to Bahar Schmidt, a travel advisor for the past 25 years who recently launched Eluxit, a travel agency and resale platform for non-refundable travel experiences, travel has “literally just picked up.”

“Definitely, everything had to be within driving distance this past summer,” she said. “For the most part, I’d say it’s still private homes and rentals.”

As consumers continue to grow more comfortable and travel restrictions begin to lift, hotel occupancy is expected to continue to increase. Both the state and county have a bevy of guidance and protocols for hotels to safely operate. While there’s no mandate at the county level as far as leaving rooms vacant, “they do have to take extra precautions and focus on cleanliness,” according to Laura Biery, marketing and economic sustainability manager for the city of Beverly Hills.

“Many of our hotels have gone above and beyond in terms of the cleaning protocols,” she said. “Beverly Hills was already a clean place to visit … but they’ve really taken it to the next level.”

To ensure cleanliness at both the Beverly Hilton and the Waldorf Astoria Beverly Hills, parent company Oasis West Realty LLC contracted with International SOS/Corporate Medical Advisors to develop a bespoke safety plan that included hospital-grade cleaning measures. Of particular note is the Xenex LightStrike robot, now active at both hotels. The germ-zapping UV robots run for eight to 10 minutes in each guest room after housekeeping has completed the cleaning, in addition to being used in public restrooms, elevators, kitchens and meeting rooms.

“The health and safety of our guests and dedicated team members has always been, and will always be, our No. 1 priority,” Oasis West Realty CEO Beny Alagem said.

“Most of the businesses are going above and beyond,” he said. “I think people are going to have to continue to wear masks and wash their hands. And it’s as simple as that.”