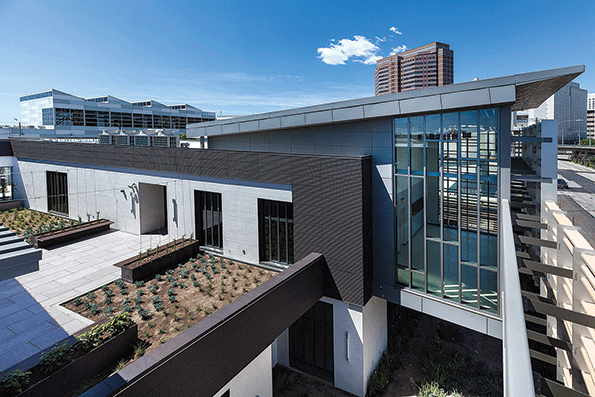 The LADOT Bus Maintenance Facility was honored as Project of the Year in the Municipal Building Awards. (photo by Paul Vu Photography/courtesy of GGA and City of Los Angeles)

On Aug. 21-22, the U.S. Green Building-Los Angeles Chapter’s 19th Annual Municipal Green Building Conference and Expo hosted over 1,200 attendees virtually from around the globe, doubling the attendance from years past. While its attendees and speakers are typically from Southern California, the pandemic has sent everyone online, and the programming addressed issues both regional and global, including COVID-19, wildfires, economic disparity, healthy spaces, climate change and more, with speakers hailing from around the globe.

“To be honest, I was surprised by our conference this year in many ways. Surprised that even after spending months developing the content, I was so moved by many of our speakers, still learned so much from our workshops, and despite it being virtual, felt so connected to our community during the event,” said Ben Stapleton, USGBC-LA executive director. “I am incredibly grateful to our team who worked so hard, to all of the speakers, exhibitors, and sponsors who dared to try something new, and to all the attendees who took the time to share in this moment.”

The awarded municipal buildings included the LADOT Bus Maintenance Facility, which was named Project of the Year. The LEED Platinum-designated facility was designed to reduce greenhouse gases by fueling the vehicles with electricity generated by rooftop solar panels strategically placed above the parking structure and within the bus parking area.

This year’s Special Awards list included Assemblywoman Laura Friedman (D-Glendale), who was presented the Elected Official of the Year Award for her ongoing work on behalf of the environment, and specifically the green building movement, including her focus on water quality, energy efficiency, homelessness, affordable housing and wildlife.