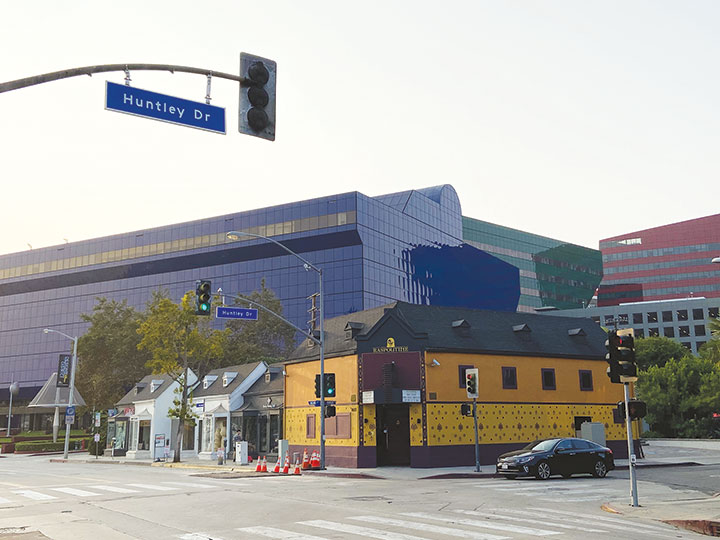 Detectives are still investigating a shooting on Sept. 11 near Melrose Avenue and Huntley Drive. (photo by Edwin Folven)

Four men were arrested on Sept. 11 after a shooting on Melrose Avenue in West Hollywood in which people on foot exchanged gunfire with people in a passing vehicle.

The shooting occurred at approximately 6 p.m. near the intersection of Melrose Avenue and Huntley Drive. Nobody was struck by the gunfire and no injuries were reported, said Lt. Bill Moulder, with the West Hollywood Sheriff’s Station.

“There was an exchange of gunfire between people on the street and people in a vehicle driving by. Deputies in the area heard gunshots and detained four people involved,” Moulder said. “Two people were arrested for assault with a deadly weapon and carrying a firearm, one was arrested for burglary and one was arrested for identity theft and false personation.”

Moulder said the incident remains under investigation and it is not exactly clear what preceded the shooting. Moulder said it is believed to be indirectly connected to the RtA apparel store at 8609 Melrose Ave., where people were gathered in line for a sale or event, he said. The suspects who were arrested are from Detroit, Moulder added. Their names were not provided; Moulder said they are in their 20s and 30s. The suspects were booked and all later released on bail.

Moulder had no further information about the burglary allegedly committed by one suspect. He said the person suspected of identity theft and false personation was taken into custody based on evidence deputies found that allegedly showed he was involved with Employment Development Department fraud.

Also, no further information was available about the suspects in the vehicle, who fled before deputies arrived.

“Our detectives are working the case and trying to identify those individuals as well.” Moulder said.

Anyone with information about the shooting is urged to contact detectives at the West Hollywood Sheriff’s Station at (310)855-8850.

Elderly man dies after being hit by vehicle on Third Street