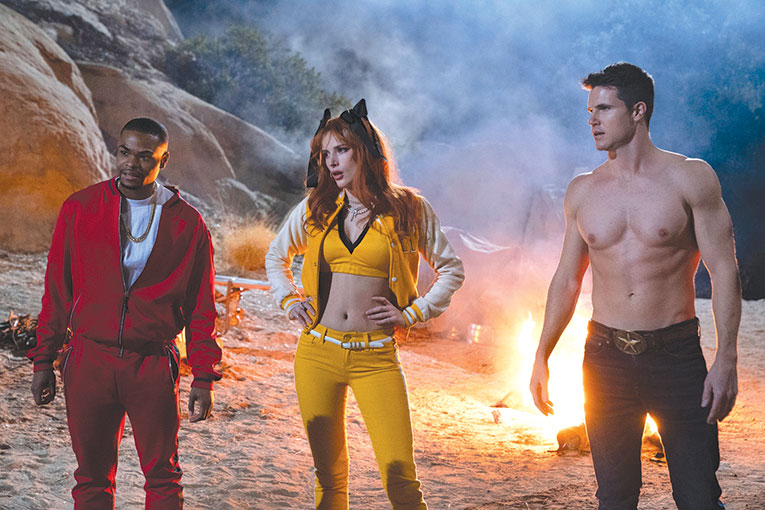 Andrew Bachelor as John, Bella Thorne as Allison and Robbie Amell as Max are adversaries to Cole (Judah Lewis) in the “The Babysitter: Killer Queen.” (photo courtesy of Netflix)

Isolation got you down? Can you taste the air? Getting headaches from every tweet vomited from that guy’s tiny hands? Sure, 2020 might be the worst, but at least some escapes remain a few clicks away. “The Babysitter” sequel serves that end well, fully embracing a silly premise with more chutzpah on its sophomore voyage.

The “Babysitter” films are low-key contributions, Netflix’s answer to B-horror comedies. Make no mistake, they owe much to the house Sam Raimi built with “Evil Dead 2” and “Army of Darkness.” Slapstick gags and winks to the past carry on through the likes of “The Cabin in the Woods” (that phrase even pops up here) and “Tucker and Dale vs. Evil.” But “The Babysitter: Killer Queen,” a subtitle without much teeth in the game, goes retro along the way, proving a predecessor need not bind what comes next.

“The Babysitter” settled for straightforward horror-comedy, a demonic ritual thrust upon newly minted teen Cole (Judah Lewis reprising the role), who fends off killer cool kids. His babysitter Bee (Samara Weaving) might be his first crush, but she’d rather sacrifice him to earn earthly treasures. Lucky for Cole, Bee and the gang are as clumsy as they are nefarious, which works in his favor.

Unlucky for Cole, life doesn’t exactly pan out in high school. He could never prove the events of that traumatic night actually happened, concerning his parent, and the next batch of teen cliques dub him a freak, hallway antagonism and all. At least childhood friend Melanie (Emily Alyn Lind, also reprising) remains his north star, even if she only looks at him like a friend.

Things turn for the worst when Cole learns of a pending transfer to a psychiatric school, so he spirits away to a massive lake party with Mel and her meathead BF Jimmy (Maximilian Acevedo) and equally dopey BFF Diego (Juliocesar Chavez).

In true sequel fashion, “Killer Queen” cranks the campiness up to 11, texturing the next chapter with surrealist moments and even video game visuals that replace action scenes and other assorted moments. It seems like director McG (“Terminator Salvation,” “This Means War”) borrowed a few ideas from neighboring Netflix content, “The Umbrella Academy.”

For McG, such choices mark a dramatic 180 compared to his oft generic cinematic aesthetic. In the hands of more memorable directors, “Killer Queen” might turn more heads.

But that shouldn’t undersell all the fun to be had here. Sure, the writing team – four credited – go for many easy jokes, especially the final moment before the credits, which can only be described as bad. But rarely does it resort to unwatchable tedium, even if it’s stock in most ways.

With few exceptions, Netflix films tend to look the same, all dressed in fashions from the same warehouse. A lack of memorable cinematography and editing infect most of its films, unless the streaming powers that be decide to drop some extra Benjamins into the production and postproduction budget come awards season.

These are the same small-screen movie choices that drive Hallmark and Lifetime films. Streamers, like cable networks, rely on familiar structural techniques and even color palettes. Certainly, “Killer Queen” treads this all-too familiar territory, but things occasionally veer away from the pack.

Those aesthetic abnormalities should be the beacon that leads to a brighter future for the streaming titan. Here, they transform a stock sequel into something a touch more engaging for horror buffs desperate to experience horrors on screen that distract from those infecting the air and the airwaves.

“The Babysitter: Killer Queen” won’t quell the allure of a theater’s premature opening, but for 91 minutes, things won’t feel as dire.