Elderly man dies after being hit by vehicle on Third Street 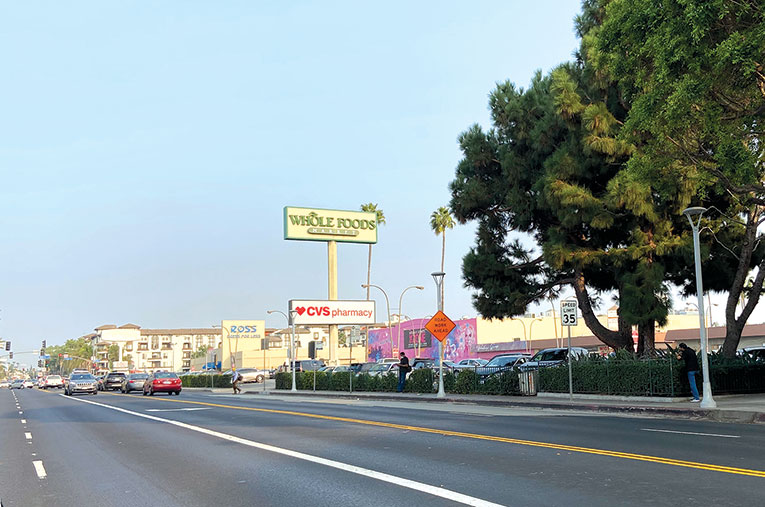 The victim was struck by a vehicle exiting the parking lot at the Town and Country Shopping Center. (photo by Edwin Folven)

A man in his mid 80s was struck and killed by a vehicle on Sept. 8 while crossing Third Street, east of Fairfax Avenue.

The collision occurred at approximately 12:45 p.m. as the driver of a 2007 Ford F250 turned left out of the parking lot of the Town and Country Shopping Center on the south side of Third Street, said Officer Randy Yoshioka, of the Los Angeles Police Department’s West Traffic Division. The pickup struck the victim, who was crossing the street southbound and was not in a crosswalk, Yoshioka said. Paramedics pronounced the victim dead at the scene.

The driver, a 31-year-old man from Los Angeles, stopped and remained at the scene. Police did not identify the driver, who was not arrested or cited. The incident remains under investigation but is believed to be accidental, Yoshioka said.

“There were no alcohol or drugs involved. [The driver] stopped and cooperated with us,” Yoshioka said. “These are tragic. [The victim] was jaywalking.”

The Los Angeles County Office of Medical Examiner-Coroner declined to provide the victim’s identity pending notification of next of kin. Yoshioka said the victim was 85 or 86 years old.

Anyone with information or who witnessed the collision is urged to call Yoshioka at (213)473-0236.

Gunfire near Wilshire and Burnside remains a mystery