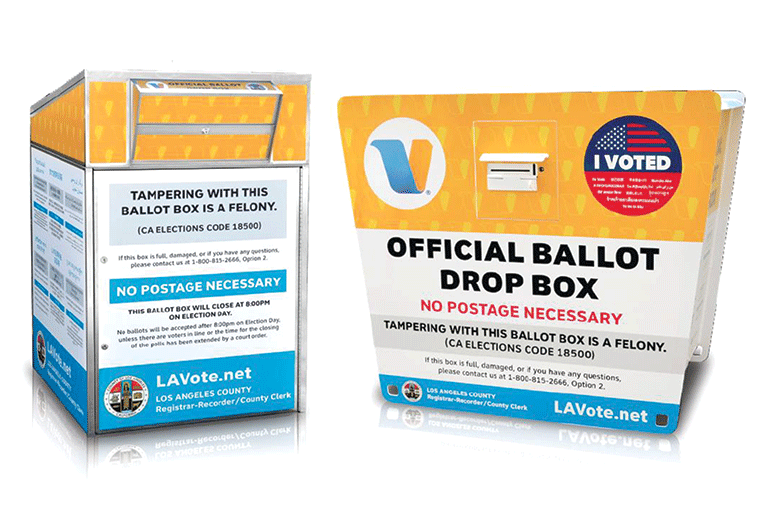 Official 24-hour drop boxes will be placed throughout the county. (image courtesy of the City of Beverly Hills)

With vote-by-mail starting on Oct. 5 and in-person voting beginning Oct. 24 for the upcoming presidential election, cities are working to facilitate the voting process, including determining where to install new Vote by Mail drop boxes.

“California is fortunate to have universal mail-in voting, but during the COVID-19 pandemic and cuts at the USPS, we need to expand our resources to ensure every Angeleno can vote easily and safely,” Ryu said.

On Tuesday, Sept. 1, the Beverly Hills City Council agreed to move forward with allowing the Crescent North parking structure to become a possible vote center. It’s a novel option given that this year’s in-person voting process will come with a host of safety requirements in the wake of COVID-19. Once again, as happened in March, in-person voters will use the touchscreen Voting Solutions for All People – and the county will be responsible for ensuring that the machines remain free from the coronavirus.

“It’s a huge space, and that’s what you need when you’re in COVID,” Beverly Hills City Clerk Huma Ahmed said of the parking facility at 450 N. Crescent Drive, which currently remains closed to public access due to COVID-19. “We’re trying to find creative and safe ways to provide in person voting for members of the public during a pandemic.”

With COVID-19 still forcing people to remain “safer at home” and medical experts anticipating a resurgence of the virus in fall, alternatives to in-person voting are critical, particularly for seniors and immuno-compromised people.

“In-person vote centers are still required, but voters are encouraged to either mail their ballots or drop them off at an approved VBM dropbox,” stated the Beverly Hills City Council Sept. 1 staff report authored by Ahmed.

Historically, presidential elections draw more voters than other elections. However, given the COVID-19 pandemic, Ahmed emphasized that the messaging of all local leaders as well as the Los Angeles County Registrar-Recorder/County Clerk, which is conducting the election, is to encourage people to vote by mail.

To that end, in addition to dropping off ballots at the voting centers or United States Postal Service facilities, voters can also avail themselves of the county’s soon-to-be installed new VBM drop boxes. In Beverly Hills, one drop box is proposed for City Hall and a second is proposed for Roxbury Park.

Ahmed said the city needed twice as many as the county wanted to provide, stating, “I fought them and I got two instead of one.”

West Hollywood will have three VBM drop boxes located at the Plummer Park Community Center, City Hall and at the West Hollywood Library.

The 24-hour VBM drop box is a full stainless-steel mailbox secured to the ground using concrete fasteners on the inside of the box so that no bolts are exposed. The slot is small enough for only a ballot to get through, and has protections against liquid and graffiti. The county envisions having each box affixed to the ground for a period of five years.

“I think that’s ridiculous to have something standing there for five years,” Beverly Hills City Councilman John Mirisch said.

While the March election had a total of three vote centers in Beverly Hills, Ahmed said that given that L.A. County voters can vote anywhere in the county, she wanted to have at least four voting centers for the upcoming presidential election.

“In March, we had a huge influx of voters,” she said.

While many were part of the daytime population that influxes through the city, significantly in excess of its approximately 22,000 voters, Ahmed said that even if many people are now working from home, the city needs to be prepared to accommodate in-person voters. In March, long lines meant that the last ballot at City Hall was not cast until midnight.

In West Hollywood, which has approximately 28,000 registered voters, the city is making Fiesta Hall at Plummer Park a vote center.

“There may be other vote centers provided by private entities in the city, but this is the only location that the city has entered into a contract to provide,” West Hollywood Assistant City Clerk Melissa Crowder said. “Per the County Registrar/Recorders’ website, recruitment and selection of vote centers for the presidential general election is underway and locations will be made available 30-40 days before Election Day,” she added.