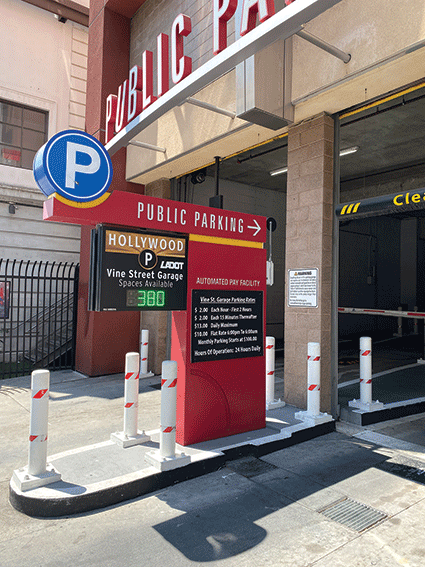 New signs at Hollywood garages aim to make it easier for drivers to find a place to park their cars. (photo courtesy of Councilman Mitch O’Farrell’s office)

New digital occupancy signs have been installed at Hollywood’s three municipal parking garages, a project spearheaded by Los Angeles City Councilman Mitch O’Farrell, 13th District, and the Department of Transportation as part of O’Farrell’s HEART of Hollywood initiative, which stands for history, economy, arts and architecture, renewal and tradition. The improvements represent the first phase of new digital wayfinding signage that will help guide motorists to, and through, the central business district of Hollywood.

“Hollywood is well served by off-street public parking, but that’s not always clear to drivers,” O’Farrell said. “The concept for the HEART of Hollywood initiative and its signature project, the Walk of Fame Master Plan, envisions a better overall experience for local residents and visitors to Hollywood. For drivers, that means being able to park efficiently. These signs are the first step toward better utilization of our public parking facilities, so that people can park easily and then enjoy the area on foot.”

“People come from all over the world to visit Hollywood. Once they get here, we want to make sure they feel welcomed and at home,” LADOT General Manager Seleta Reynolds said. “This new signage will guide residents and visitors alike, part of a series of improvements to make Hollywood streets more inviting for all.”

Many of the new digital occupancy signs are designed in an Art Deco style, consistent with pedestrian signage installed in 2019 and with other improvements conceived in the Walk of Fame Master Plan. LADOT is now working to complete the second and third phases of digital wayfinding in Hollywood. Phase Two will include the placement of additional digital occupancy signs in the vicinity of each of the garages, pointing drivers to the facilities. Phase Three will include the upgrade of six existing – but currently deactivated – digital messaging signs, along with the installation of five new digital messaging signs. These signs will be programmable with information for motorists and will be placed around the perimeter of Hollywood, alerting drivers to upcoming events, street closures and more.