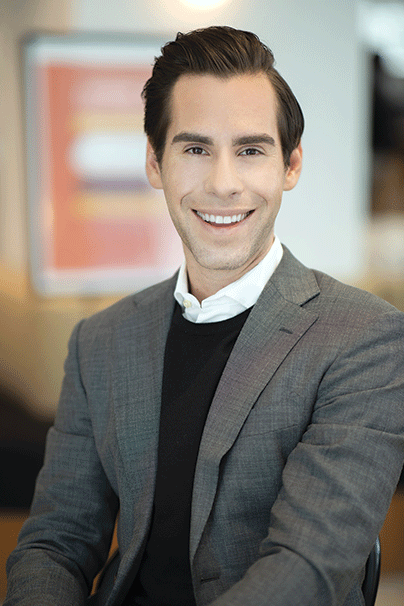 Adam Coen Aslatei, a former Beverly Hills resident with ties to the community, is CEO of the dating app S’More. (photo courtesy of Adam Cohen Aslatei)

Emily, a West Hollywood resident who asked that her last name be withheld for privacy reasons, said seeking romantic relationships has been made “even more complicated” by the shutdowns.

“No one knew that it was going to go on for this long,” she added.

This spring, when the restrictions were more severe and there was more uncertainty about the timing of the lockdown, dating pretty much came to a halt for 34-year-old Marina del Rey resident Chris Barulich.

Instead, single Angelenos have turned to virtual dating, and a pair of apps with competing strategies and local connections are gaining popularity.

S’More takes physical appearance out of the equation, at least at first, by requiring users to interact with each other about their interests and personalities. As the relationship progresses, the users’ photos become unblurred, which Aslatei said allows people to connect with others based on deeper factors than appearance and has drawn comparisons to the Netflix dating show “Love is Blind,” as both require a connection to be formed before unveiling what people look like.

“We’re not building a dating app; we’re building a community,” Cohen said. “Dating apps are transactional. Once you find your person, you leave. Our app is about creating relationships, any kind of relationship that’s not superficial, and if you want to find a friend and not base it on a headshot, you can do that on S’More.”

Emily, the West Hollywood resident, said it “can be daunting at first” to emphasize conversation before appearance, but she’s a fan of the approach, which she described as “different than the other apps that are out there.”

“I just think that, in general, I’m not usually somebody who would be so inclined to use a dating app. I like to meet someone in person. But in these times, [S’More] is a good option, and [the pandemic] was the kick I needed to download it and try it out. I would say to anyone questioning it, just give it a try,” she said.

Cohen, a former resident of Beverly Hills whose family still resides in the city, said everyone being stuck at home has “helped the whole industry” of virtual dating, as “the excuse of ‘I don’t have time to date’ went out the window.” Instead of attending in-person events, S’More offers virtual get-togethers, such as happy hours on Instagram Live. Celebrity involvement helps drive users to the app, as the events feature guests like Sutton Stracke of “The Real Housewives of Beverly Hills,” who discussed dating in Beverly Hills.

“Even if you have a special person in your life, you can use S’more, and we hope you do, because we’re building a community,” he said.

The Filter Off dating app requires a virtual face-to-face conversation before users can decide if they’d like to pursue the relationship or not. (photo courtesy of Filter Off)

While S’More obscures faces until a relationship can be built, dating app Filter Off takes the opposite approach, requiring face-to-face interaction – at least virtually – early in the process. Unlike many popular dating apps that have users like or dislike profiles that often include photos and text, Filter Off requires a brief video chat before either party can say yes or no.

“I always felt dating apps were really inefficient,” said Zach Schleien, a cofounder of Filter Off. “It would take a lot of time to swipe, chat with them and then go out to meet them, but oftentimes, there was no chemistry. I wanted to develop an efficient way to meet people.”

Schleien said his app has also seen an uptick in users during the pandemic – a “30-fold increase” in traffic, by his count – and Filter Off also offers a pair of services: a matchmaker to connect people and interest- and group-based virtual events to allow people to connect themselves, similar to speed-dating.

The events are organized around passions and locations, such as an event for fans of health and fitness in Beverly Hills on Sept. 17, or they’re set up by organizations that want to help their members find relationships. Schleien said both the interest-based and group-hosted events are reflections of the way relationships have traditionally begun.

“When you think about dating, a lot of people meet their significant others at university, or they’re attending a party or event,” he said. “You’re attending a university or event with people who are like-minded … or it’s around a specific theme. Our user base, they want to meet like-minded singles. People like to meet like-minded folks, so that’s why organizations love it too, so they can allow their audience to connect with one another when they have similar interests.”

“I think people are just sick and tired of dating apps, and Filter Off is this new paradigm of dating, being video-first. People do their makeup before events and bring a glass of wine with them, and it really is an experience and makes it so special,” he said.

Barulich, the single from Marina del Rey, said he enjoys meeting people on Filter Off, and he could see the app becoming the most popular dating app in the near future.

“It’s great just to talk to people. There’s no pressure. It’s nice going on and having a video date with people, because sometimes there’s no connection … If you meet someone you like, it’s cool and you can message them after,” he said.