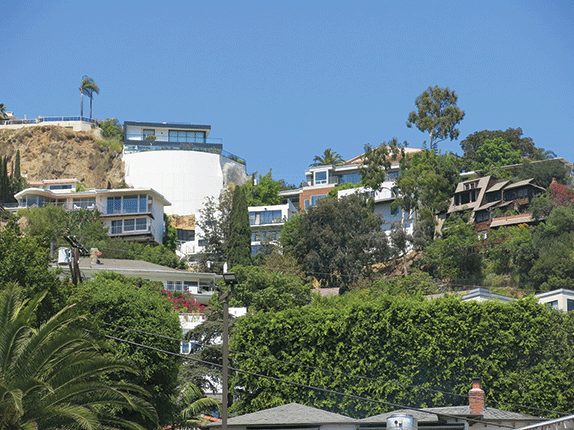 Law enforcement and city officials say illegal parties in the Hollywood Hills create a health hazard due to COVID-19. (photo by Cameron Kiszla)

Los Angeles Mayor Eric Garcetti announced the latest enforcement action on Sept. 1 against disruptive house parties held in violation of COVID-19 public health orders, stating that water and electricity service was shut off at a house in the Cahuenga Pass identified as the site of repeated problems.

The house in the 7200 block of Caverna Drive was the site of large parties on Aug. 24 and Aug. 30, authorities said. Police went to the house on Aug. 24 and issued a warning that the party violated public health orders and that utilities may be disconnected. A written warning was also posted. On Aug. 30, police responded to another large party at the same house and issued a second warning. Garcetti authorized service to be shut off on Tuesday.

The name of the owner of the property was not disclosed, and it was unclear whether the site was used as a short-term rental for parties or who was allegedly hosting the gatherings. Authorities said either way, hosting parties with a large number of people is illegal during the public health orders because they enable the spread of COVID-19. Hosting gatherings at homes in the Hollywood Hills also violates a city ordinance enacted in 2018 that allows both property owners and those who rent houses to throw parties to be cited and fined for repeat offenses.

“COVID-19 has taken a devastating toll on our city and country. Yet the power to stop the spread of this virus and save lives rests in our hands, by wearing masks, washing our hands, keeping our distance and avoiding large gatherings. The owner and residents of this home have failed to follow our public health orders and ignored multiple warnings to stop hosting large parties. So, the city disconnected utilities to this house,” Garcetti said. “Parties can spread the coronavirus, and any decisions to organize, host or attend one can mean the difference between life and death.”

Capt. Steve Lurie, commanding officer of the Los Angeles Police Department’s Hollywood Division, issued a statement on social media warning people who may be thinking about hosting parties or allowing their homes to be used as short-term rentals for parties to “think twice.”

“As you know, the coronavirus has shut down a lot of the formal nightlife in Hollywood. Unfortunately, we are seeing professional party promoters move those social events up into the hills into private residences. This is a bad idea for several reasons. First of all, they can be dangerous, and even more importantly, they are clearly places where we may see the spread of the coronavirus, as the houses are crowded and folks are not wearing masks or practicing good distancing,” Lurie said. “Should you decide to use your home as a short-term party rental, you could be cited, we could seek criminal filings against you and you could have your utilities shut off for the remainder of the emergency order.”

The mayor’s announcement about power being shut off to the house in the Cahuenga Pass came on the heels of service previously being disconnected to a residence in the Hollywood Hills rented and shared by TikTok social media celebrities Bryce Hall and Blake Gray. On Aug. 29, Los Angeles City Attorney Mike Feuer announced that misdemeanor charges of violating the health order have been filed against Hall and Gray, as well as the property owners of two other homes in the Hollywood Hills where repeated parties have allegedly been held.

“With hundreds of people attending, loud music all night long and cars blocking access for emergency vehicles, party houses are really out of control nightclubs and they’ve hijacked the quality of life of neighbors nearby,” Feuer said. “As if that weren’t enough, the hosts are incredibly irresponsible, with COVID-19 spreading and parties banned because of it. We’ve got to put a stop to it. If you have a combined 19 million followers on TikTok during this health crisis, you should be modeling good behavior, not brazenly violating the law and posting videos about it, as we allege.”

Feuer said the charges against Hall and Gray stem from parties allegedly held on Aug. 8 and 14. On Aug. 8, police responded to a party and cited Hall for violating the health order, Feuer said. A warning about a potential utility shut off was posted and the crowd was dispersed, he added. Officers were called to the home again on Aug. 14, this time on a call that shots had been fired, and allegedly found another large party occurring. There was no evidence of shots being fired or any weapon found, but police issued a citation to Hall for allegedly hosting the party, dispersed the crowd and posted a second warning about utility disconnection. On Aug. 19, water and electricity was shut off. Feuer’s office filed charges nine days later. Penalties include up to one year in jail and up to $2,000 in fines.

Also charged with violating public health orders were Jianwei Bai, owner of a home on Outpost Drive, and David Marvisi, who owns a home on Sunset View Drive. Those homes have allegedly been the sources of numerous complaints and both owners have received multiple citations for violating the city’s party house ordinance. The homeowners also received warning letters about potential prosecution, Feuer said.

Police also continue to investigate a homicide that occurred on Aug. 26 at a party at a short-term rental in the 2200 block of San Ysidro Drive. A man was shot and killed and another injured after an argument at the house. Police said approximately 25 to 30 people were visiting the home and fled after the shooting occurred. The victim was identified as Deshone Lucas, 44, or Los Angeles. Investigators determined gang members were present during the gathering and believe the motive stemmed from an argument between the gunman and one of the victims who was shot, said Detective Sean Kinchla, with the LAPD’s West Bureau Homicide Unit. Anyone with information about that crime is urged to call (213)382-9470.

Garcetti reiterated that gatherings are a primary location for the spread of COVID-19 and warned that the city will continue to crack down on illegal house parties.

“No matter how young you may be, your choices threaten your health,” Garcetti said. “If you’re thinking about joining a party this Labor Day Weekend, cancel those plans. If you want to be able to hang out with friends in the near future, or see schools and more businesses reopen, we have to be smart, be safe and defeat this virus.”