‘Bill & Ted Face the Music’ is an excellent adventure 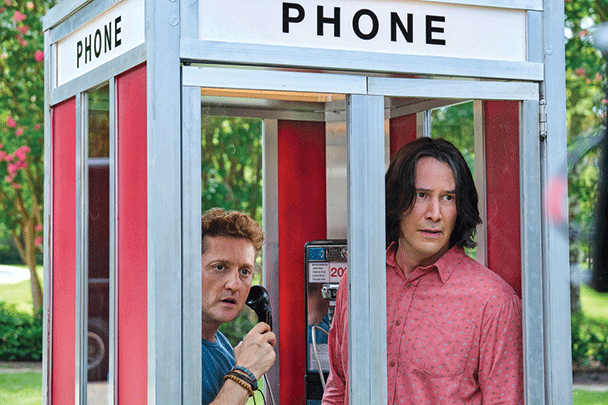 Bill (Alex Winter) and Ted (Keanu Reeves) are back for an excellent new adventure in “Bill & Ted Face the Music.” (photo courtesy of Orion Pictures)

For a third and probably final time, Bill S. Preston, Esq. (the venerable Alex Winter) and Ted “Theodore” Logan (the immortal Keanu Reeves) traverse time, space and what lies beyond in “Bill & Ted Face the Music,” an excellent adventure that closes out a mostly bogus summer. This is how a franchise should end, with an eye to the past and future.

Sure, time-travel stories cheat on that point (shout out to “Avengers: Endgame”), but this one equally cares about nods to past glory and its characters. Ignore the haters and enjoy this one for yourself.

How have the Wyld Stallyns frontmen spent almost three decades? Unsuccessfully trying to compose the perfect song that’ll unite the world, in effect creating a utopian paradise. They feel the weight of their responsibility, but writer’s block undoes these one-hit wonders. Then, a third visitor from 700 years later comes knocking with their next Billboard chart-topper lest all reality meet a sudden end.

Rather than channel their creative energy, Bill and Ted attempt to steal from themselves in the future. Various antagonists hinder this trek, including robot Dennis (Anthony Carrigan) and their own “future us’s,” throwback vernacular to encounters with themselves in “Excellent Adventure” (recall their “favorite number”) and “robot us’s” from “Bogus Journey.”

To cover more ground, Bill and Ted’s daughters Thea (Samara Weaving) and Billie (Brigette Lundy-Paine) head into to the past in their own heroic journey, revisiting elements of the first two flicks (no spoilers on what specifically).

Their story embraces the common legacy motif and serves as an homage to the franchise’s former glory. That said, Weaving and Lundy-Paine rock their caricatures of each dad.

“Bill & Ted” is a modest franchise compared to contemporary peers. Three feature films, a documentary (“Bill and Ted Go to Hell”), eight episodes of a live-action series (no Reeves or Winter) and an animated one. It’s always been B-grade content, but that shouldn’t distract from the charms, historical lessons (shallow they may be) and self-awareness. “Face the Music” actually builds on those ideas with heartfelt moments that prove even inept bros can learn something new.

Nostalgia is a gamble. How well do you remember the “Bill & Ted” films? Take “3 Ninjas,” an early ‘90s children’s film that aged terribly. Well, that’s not quite true. It aged as bad then as it does now. “Bill & Ted” has always been ridiculous, “Bogus Journey” earning critical ire in 1991.

That’s hardly shocking considering the films’ many outlandish moments, from Lincoln’s dramatic speech about a “most excellent” romp into the past to the duo’s Twister match with Death (William Sadler reprises once more here). Combining time travel, supernatural elements, robot sentience and, of course, slacker gags in the final chapter is quite on brand.

More than a decade before “Dude, Where’s My Car?” featured daft dudes thrust in the middle of government and alien conspiracies, their predecessors decided that jumping the shark wasn’t a concern, but primary currency. Come “Bogus,” jumping the shark felt natural. The sequel added robots, crazy villains and a supernatural excursion into the underworld.

Those additions to a modest time-travel premise catered to burgeoning GenXers and some elder millennials. “Face the Music” remembers its former audiences while updating the slacker story for a new generation. Reeves’ recent revival sure helps. He’s a global treasure, after all.

As the third installment, the film does succumb to the peer pressure of more pomp and circumstance. Modern cinema always interprets this as world-ending doom, chock full of CGI spectacle.

But when that goes down here, no dramatic battles grace the screen. Grand spectacle plays for laughs and an equally emotional conclusion.

“Bill & Ted Face the Music” knows what we need right now: delightful characters, hope for tomorrow, a few good chuckles and muscle suits. To call this film idiotic fun or a shameless cash grab ignores how effectively everything weaves together, allowing our leads and others to find satisfying conclusions. While the story of Bill and Ted seems to be at an end, Billie and Thea will hopefully return. We need that now more than ever.