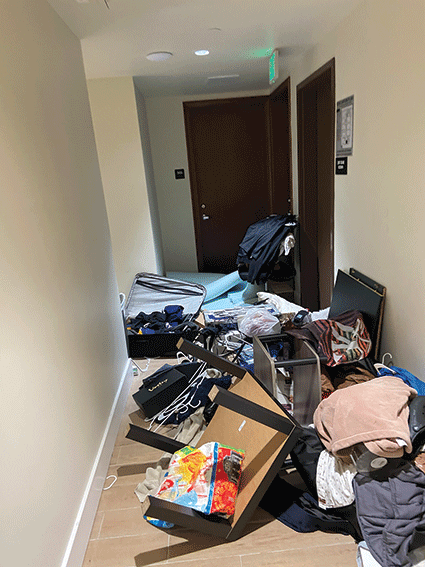 Tenants of Dr. Stephen Copen allege that he damaged their belongings by throwing them into the hallway. (photo by Aidan McNulty)

A controversial Beverly Hills landlord was cited for misdemeanor vandalism on Aug. 31 after he allegedly damaged some of the belongings of the tenants of one of his properties in Los Angeles.

Dr. Stephen Copen, a Cedars-Sinai nephrologist, gained a degree of notoriety in Beverly Hills in 2018 when the Beverly Hills City Council unanimously adopted an urgency ordinance to prohibit no-just-cause evictions in the city, with Copen given as an example of the type of landlord the city should act against by multiple speakers claiming to be tenants of his Beverly Hills properties. Mark Elliot, founder of the Beverly Hills Renters Alliance, said Copen owns seven rental properties in Beverly Hills.

“We talk about the bad actors, this dude is the exact person we want to deal with,” then-Vice Mayor and current City Councilman John Mirisch said during the 2018 council meeting.

On Aug. 31, Copen again became the subject of a dispute with his tenants, this time in Los Angeles near the UCLA campus. He was detained and cited for vandalism by the UCLA police department after he allegedly demanded that some of the residents of his building at 611 Gayley Ave., which houses many members of the Pi Kappa Phi fraternity, move out on Aug. 31.

The tenants’ lease was valid through midnight on Aug. 31, and earlier in the day, they were in the process of removing their belongings when Copen demanded they leave immediately, said Steven, a tenant who asked that his last name be withheld to protect his privacy leading up to what could be a criminal trial. Copen has a court date on Nov. 4 at the Airport Courthouse, and he did not return calls seeking comment.

“The last week of August is when I signed a lease for a new place, and over Aug. 29 to the 30 is when I did the bulk of my moving out. I still had a couple items, but my roommate still had all of his stuff in there. On the 31st is when I was going to get the rest of my stuff,” said Steven, 24, who graduated from UCLA in June.

On Aug. 31, Steven said that Copen, Copen’s wife and a worker hired by Copen arrived to change the locks on Steven’s unit. Once there, Copen found fraternity member Aidan McNulty, a 20-year-old who was in the process of moving out of a different unit at 611 Gayley Ave., in Steven’s unit, Steven and McNulty said. Steven was allowing McNulty to stay in Steven’s unit and store some things there, as McNulty’s younger brother was going to be replacing Steven and some of McNulty’s belongings were going to go to his brother.

After the officers left, Copen returned and again demanded that McNulty leave, this time grabbing the possessions remaining in the unit and throwing them into the hall, McNulty said. A video captured during Copen’s alleged damaging of the property was uploaded to YouTube and has gathered nearly 6,500 views as of Sept. 9.

“Dr. Copen started taking my TV, my computer and PlayStation and throwing it out into the hallway. There are cracks in my TV and PlayStation now, dents and all that,” McNulty said.

McNulty said he tried to stop Copen and reason with him, once by physically blocking his path. They both ended up on the floor, McNulty said, but “Dr. Copen never stopped throwing stuff out. Not once. He continued to break stuff. He caused more than $2,000 worth of damage.”

During the alleged property damage, the UCLA Police Department returned to the scene, Steven and McNulty said.

Lt. Scott Scheffler of UCPD confirmed that Copen was cited for vandalism and that Steven and McNulty’s general characterization of the incident is “consistent with what was reported to the UCPD.”

Police declined to provide the report to the Park Labrea News and Beverly Press, but a copy of the report from one of the alleged victims alleges that Copen was found in the unit, where he told officers he intended to stay the night. The report added that after allegedly pushing the responding officers and attempting to leave, Copen was detained and cited for misdemeanor vandalism. The report also indicates that officers want Copen charged with illegal forcible entry and detainer for entering the unit without permission, changing the locks and removing the tenants’ personal property.

For his part, Copen wants a battery charge filed against McNulty for the alleged struggle during the incident, the report said.

After the Aug. 31 dispute, Steven and McNulty left the Gayley Avenue building, with Steven moving into a house in Westwood. McNulty is currently staying with Steven and is looking to rent a house with several of his friends in the near future. McNulty’s younger brother, however, was banned from the property by Copen and is still searching for a new place to live, McNulty said. In the meantime, McNulty said his younger brother is staying with their parents.

“Dr. Copen banned me from the building forever, me and anyone with the last name McNulty. He said, ‘No McNultys are ever allowed back in 611,’” McNulty said.

Steven and McNulty questioned Copen’s fitness to serve as owner of a rental property, citing other incidents such as the alleged removal of a Black Lives Matter banner and multiple instances of Copen allegedly entering units without giving advance notice and without a valid reason, such as an emergency.

“We’re personally sick that this behavior has been hidden in the shadows for so long,” Steven said.

Elliot, of the Beverly Hills Renters Alliance, said Copen has a reputation in Beverly Hills for improving and maintaining his properties only when the city demands action be taken, and Copen’s tenants have reported problems to the BHRA in the past.

“He kind of epitomizes that landlord who extracts all of the revenue out of his properties and lets the properties go,” Elliot said.

Elliot added that he doesn’t believe Beverly Hills needs landlords who manage their properties the way Copen allegedly did on Aug. 31 at UCLA.

Daniel Yukelson, executive director of the Apartment Association of Greater Los Angeles, declined to comment on Copen’s case without being more familiar with the allegations and hearing Copen’s side of the story. He pointed out that there are “bad actors” on both sides of disputes between landlords and tenants.

“Nevertheless, one of our association’s primary goals is to increase professionalism within the multifamily rental housing industry and to keep our members apprised of existing laws and pending regulations,” Yukelson said in an email. “We do not condone under any circumstances illegal behavior by rental-housing providers, whether such behavior is in the form of any type of discrimination, tenant harassment, failure to provide housing that meets habitability standards and local code, shutting off of utilities or other illegal behavior … As rental-property owners, we are in the business of providing housing. We are not in the eviction business. We serve our customers, the renters at our properties, just like any other business serves its customers and provides the best customer service possible.”

I have a landlord like Copen. He has properties from Glendale to San Diego.
No one told me before my daughter and I
moved here that the owner of the properties would be so evil.

Mr. Lee does not take care of this property. There are about nine cottages
here.
The cottage I am renting has about 15 major issues that need repair here.
In addition,Mr. Lee has a handyman that is less a handy person than I am.
He does even know how to light a heater.
Mr. Lee has a bench warrant out as he is a slum landlord.

Can you imagine this guy being in charge of your health?! I wouldn’t want a kidney doctor who behaves this way ANYWHERE near mine!

Slumlord Doctor. I wonder if his patients know what a terrible person he is?

Dr Copen come on have a heart. I am very ashamed to see someone with a Dr in front of their name behave in such a heartless way. I agree with the post in the article that read “Dr Copen is just a horrible person” Shame on you Dr Copen.