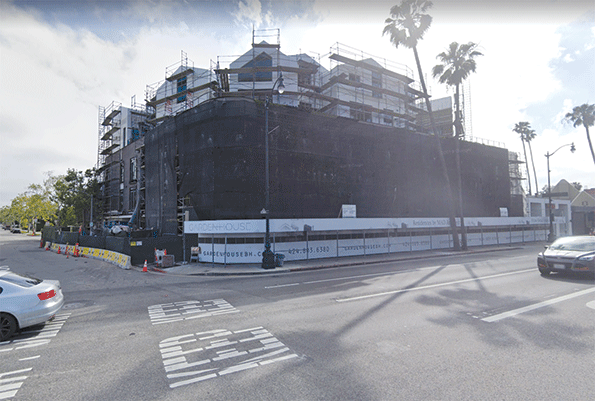 The mixed-use project at 8600 Wilshire Blvd. has irked the owners of nearby single-family homes. (photo courtesy of Google Maps)

In 2021, as required by state law, the city of Beverly Hills will be undertaking its mandated update of the housing element of the general plan. In furtherance of that initiative, on Aug. 27 the Beverly Hills Planning Commission said it was going to take an inclusive view to rezoning portions of the city in opting not to rezone two parcels abutting a five-story mixed-use project located at 8600 Wilshire Blvd.

The Planning Commission’s decision brings to conclusion a 13-year process for the owners of 128 and 130 S. Carson Road. The two single-family residential property owners had sought to have their parcels rezoned after the city approved the five-story mixed-use project for their neighbor on Wilshire Boulevard.

“Right now, with the change in the mixed-use ordinance and the change in the housing element … and what is going to take place throughout the entire city … we need to take a holistic approach,” said Planning Commission Vice Chair Lori Gordon, the only member of the commission to have been a member of the past two ad-hoc committees studying the issue.

In moving forward, the city will be required to look more broadly at its overall housing stock and develop opportunities to accommodate additional housing units. The revised housing element requires a comprehensive study to deal with the Regional Housing Needs Assessment, which essentially tasks Beverly Hills with adding roughly 3,000 residential units in the coming cycle, October 2021 through October 2029. The details are poised to be finalized in fall 2021.

The owner of 128 S. Carson Road, whose property line is directly behind its Wilshire Boulevard neighbor, spoke at the online Planning Commission meeting reminding commissioners that these two individual, single-family-home residential neighbors had been asking the city for a zone change allowing them the ability to build multifamily residential dwellings for 13 years.

Senior Planner Timothea Tway told the commission they were “aware” that the City Council had approved the mixed-use project on Wilshire Boulevard in 2007. Since that time, according to the Aug. 27 staff report authored by Tway, the city had considered rezoning those two specific parcels from single-family zoning to multi-family zoning “due to the impacts of the adjacent mixed-use building.”

“Since 2007, various efforts have been made to determine whether the two parcels in question should be rezoned,” states the report. “At this time, the ad hoc committee is recommending that the Planning Commission decline to rezone the two single-family parcels … it may be more appropriate to consider the request of the subject property owners during a more holistic study of zoning and the pattern of development in the city or the neighborhood than to rezone two parcels at this time.”