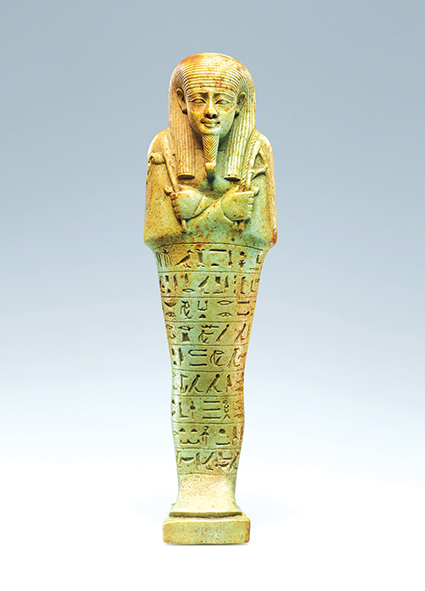 An ancient Egyptian statuette known as an Ushabti, which was discovered in Neferibresaneith’s tomb, is giving scholars at the Getty a lot to think about when it comes to the afterlife.

Ushabtis are figurines that were designed to be placed in someone’s tomb. Ushabtis look like human figures that have been mummified, usually with their arms crossed over their chest. Some, like the Getty’s ushabti, were very carefully made with detailed features, while others are much simpler.

While ushabtis were made out of almost any material, including wood or clay, the most common material for making ushabtis was called faience. Faience is a type of ceramic without clay that was glazed and fired. The most common color of faience glaze was some variation of blue or green, but faience could also be many other colors, such as red, white, yellow or black. Faience was relatively cheap and was used to make dozens of different types of objects, from vessels to jewelry and especially ushabtis.

According to Egyptian beliefs, when the deceased came alive in the afterlife, the ushabtis would also come to life and would perform any menial tasks that the deceased might be asked to do. Egyptians depended heavily upon agriculture in daily life, and it was assumed that the afterlife would be similar, so most ushabtis are depicted holding agricultural tools like hoes or bags of seeds to continue this farmwork in the afterlife. To make sure the ushabti knew what to do, each figurine was usually inscribed with a short spell from the “Book of the Dead.” This spell was designed to bring the ushabti to life and gave the ushabti instructions for performing work on behalf of the deceased.

Ideally, an individual would be buried with an ushabti for every day of the year, but only wealthy people could afford to include this many ushabtis in their tombs. Sometimes only a few ushabtis would be included in a burial, along with other items such as furniture and clothing for the deceased to use in the afterlife.

The Getty’s particular ushabti belonged to an individual named Neferibresaneith, whose name appears at the beginning of the spell on the figure. It was discovered along with 335 other ushabtis in the original burial of Neferibresaneith. Neferibresaneith was overseer of Lower (northern) Egypt, administrator of the palace and a priest who served under King Ahmose II (c. 570–526 BCE).