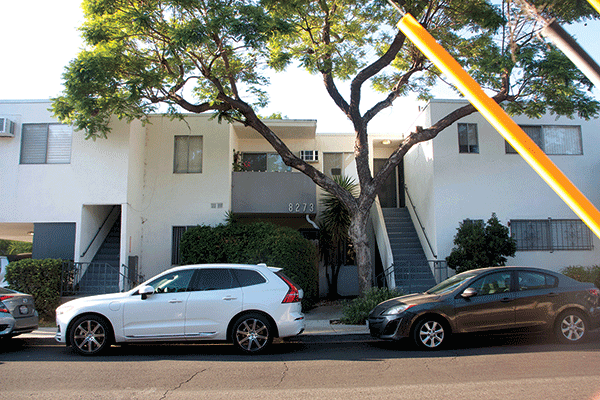 A prohibition on smoking in multi-family dwellings is under consideration in West Hollywood. (photo by Jose Herrera)

The West Hollywood City Council will continue its discussion on potential changes to the city’s smoking ordinance after residents were unable to access the council meeting online.

Mayor Lindsey Horvath received texts from residents during the meeting informing her and the rest of the council that the livestream of the meeting was not accessible. Horvath said due to damage to a telephone pole, eastside residents lost connection to the internet and were unable to access the public hearing.

The California Brown Act guarantees the public’s right to attend and participate in meetings of local legislative bodies. As a result, the council’s decision on the item was tabled until its next meeting on Aug. 17.

However, city staff was able to provide the council with a report, which can be viewed at youtube.com/wehotv. The City Council will consider prohibiting smoking in multi-family dwelling apartments and condominiums, as well as enclosed common areas.

The city could also potentially create a registration program that would require the designation of units with a smoking or non-smoking status. The new ordinance would also prohibit smoking in any park and within 5 feet of any parklet.

By prohibiting smoking in multi-family dwellings and other public areas, the city seeks to create healthier living environments, according to the staff report. But the smoking ordinance does not draw a distinction between cannabis and tobacco smoke, City Councilman John Duran said.

Danny Rivas, the code compliance manager for the city, said the city cannot make that distinction because of state law.

“The health and safety code of the state refers specifically to qualified patients of medicinal cannabis, so it does say that, but it doesn’t get into the differences between tobacco or cannabis,” Rivas said. “It just speaks to what is precluded and what is not precluded if an area is prohibited from smoking.”

Rivas added that, if approved, cannabis smoking would not be allowed in multi-family dwellings, but residents would be able to consume edibles.

Duran supported the ban of tobacco smoking in common areas and certain public spaces, but strongly disapproved that the ordinance would prohibit smoking cannabis both for medicinal purposes and recreationally.

In response to Rivas’ comment, Duran said it takes longer for the body to process and digest edibles.

“People with epilepsy, AIDS, cancer and all the other ailments that one would use medicinal marijuana for, if we pass this, they would be precluded from using their medicine in their apartments or condominiums,” Duran said.

Duran also noted that while tobacco smokers are free to go outside to smoke tobacco, due to California’s Prop 64, which prohibits the consumption of cannabis in public, residents can only smoke in their homes.

The staff report explained the ordinance would have the city create a registration program where all existing units in a multi-family dwelling must be designated “smoking” or “non-smoking.”

If a resident designated their unit as “smoking,” they would be allowed to smoke in their unit, but any units designated as “non-smoking” could not be changed. Eventually, any unit, upon vacancy, would automatically become a “non-smoking” unit.

More than 20 West Hollywood residents called in during public comment. Council members listened to public comments, which were evenly split in favor and opposition to the ordinance. People in support discussed the negative health impacts of second-hand smoke and the importance that implementing these smoking changes would have on their lives. Those in opposition talked about the positive health impacts cannabis has on their illnesses while also mentioning how cannabis is different from tobacco smoke.

There were also concerns that some landlords would evict tenants if the smoking rules were approved.

Peter Noonan, rent stabilization and housing manager, informed everyone that smoking would not hold ground as a reason for eviction. Noonan said the city would need to find “a fine balance” in this program,  if the council does consider adopting it.

Ultimately, since the item was tabled for another two weeks, council members agreed it would provide city staff with an opportunity to delve deeper into the issue regarding cannabis smoking.

“OK, so recognizing that we’ve had deliberation and had some opportunity for questions on this issue of separation of tobacco from cannabis smoke at the state level, we’ll have an opportunity to have more input on this issue given that we are postponing the discussion until [our next meeting],” Horvath said.

D”ue to California’s Prop 64, which prohibits the consumption of cannabis in public, residents can only smoke in their homes.” Yeah, right, like that’s enforced. Since it became legal WeHo smells of pot from Doheny to LaBrea, and I don’t think it’s air freshener..