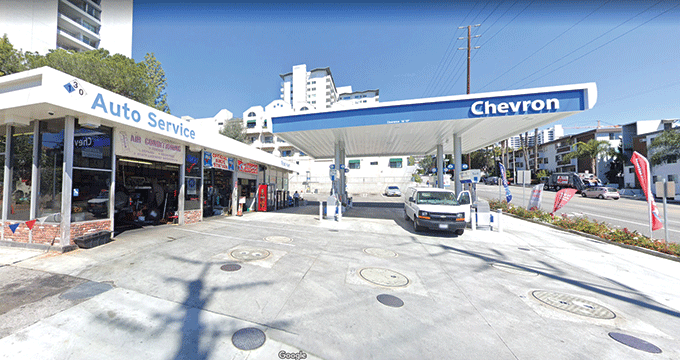 The service bays at the Chevron on La Cienega Boulevard will be eliminated to make way for a convenience store and car wash. (photo courtesy of Google Maps)

The West Hollywood City Council failed to be swayed by City Council candidate Jerome Cleary’s appeal regarding the Planning Commission’s approval to redevelop the Chevron service station-anchored parcel at 1107 N. La Cienega Blvd. The council voted 3-1-1 at its Aug. 17 meeting to allow the owner to move forward with redeveloping the site, which is located on the northwest corner of La Cienega Boulevard and Holloway Drive.

Councilwoman Lauren Meister was the lone no vote to allow the project to proceed, citing her concern about negative environmental impacts. Mayor Pro Tempore John Heilman abstained from the vote due to the proximity of his residence to the project.

“After reviewing the entire record, staff finds that the appellant did not provide any new evidence or documentation of errors or identify any unsupported findings substantiating the basis of the appeal as required by the West Hollywood Municipal Code,” Senior Planner Antonio Castillo said in recommending that the council deny the appeal.

The proposed project, which was unanimously approved by the Planning Commission on March 5, includes the demolition of the 1,724-square-foot Chevron service station building with a 24-hour convenience store and automobile repair service. The proposed new construction includes a 2,584-square-foot, two-tenant commercial building with a 24-hour convenience store that will sell beer and wine. Additionally, the project includes the construction of an attached 900-square-foot automated car wash facility.

“Specifically, the appellant opposes the approval of the project based on the assertions that the project does not adequately address traffic mitigation measures; adds unnecessary additional beer and wine sales to the vicinity; did not follow proper public noticing and Planning Commission approval procedures; does not comply with environmental regulations; and that onsite parking is insufficient to support the proposed operation,” the Aug. 17 staff report stated.

As part of the project, the site will include 13 new trees, perimeter landscape planters and other accessibility improvements to the public right-of-way, in addition to restriping the parking spaces. The existing service pumps, underground gasoline tanks and canopy will remain operational.

Before the council vote, staff spoke with the applicant team who agreed to remove the easternmost driveway along Holloway Drive as a condition of approval. To further lessen the anticipated traffic impacts, the applicant also agreed to restrict access to the landscaped area at the westernmost property line.

“This location will be a beautiful addition to the city and one that meets all the findings that are necessary under the city code,” said attorney Stephen Jamieson on behalf of property owner Ben Pouldar.

In anticipation of the meeting, the council received 16 emails, 13 of which opposed the project.

“I am alarmed at what I hear is proposed for the Chevron station site. How will the addition of three businesses that have never been there before not egregiously impact a notoriously dangerous intersection at La Cienega and Holloway where serious car accidents have occurred including six fatalities? I am against the project as proposed, and hope that the council will see the irreparable damage it will cause to our community. Allowing the addition of these new businesses to the site will make the neighborhood’s main problems, noise and traffic, worse,” wrote resident Helene Shapiro, who is a member of the HOA Board at Empire West.

Callers during public comment at the meeting were mixed, with roughly half supporting the project and one resident noting: “The community needs another car wash.”

Cleary, who filed his appeal on March 16, detailed his concerns that the car wash would greatly increase traffic in the area. After visiting another car wash owned by Pouldar three times, he said he always observed long lines of cars, some taking over parking spaces.

“Are we to believe that suddenly they’re going to wave a magic wand and be great business owners?” Cleary questioned. “No. I don’t believe it at all.”

Pouldar told the council that the forthcoming car wash would be automated and able to process approximately 20 cars per hour with each car going through in around three minutes.

The property will continue to operate as a gas station with the existing gas pumps and canopy remaining, but the automobile service bays will be eliminated. In addition to the convenience store and car wash, the new building will have space for another small shop.

Very disappointing meeting. It’s insane to have a carwash on such a dangerous traffic corner.