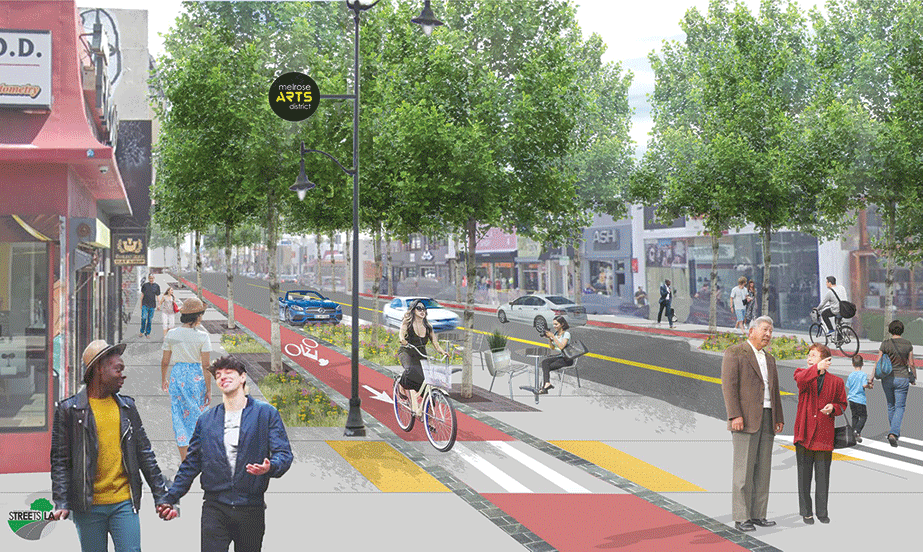 The city has released renderings of how the street may be reconfigured under the “Uplift Melrose” project. (photo courtesy of Streets LA)

Melrose Avenue may be transformed between Fairfax and Highland avenues by a proposed city of Los Angeles project that would bring more sidewalk space, separated bike lanes, new crosswalks, better lighting, more trees and improved landscaping to the shopping and dining district.

The “Uplift Melrose” project has received the support of the Mid City West Community Council, whose board voted 29-2 in favor of the plan at a meeting last week. The Melrose Business Improvement District is working with Streets LA, formerly the city’s Bureau of Street Services, to implement the idea. Currently in the conceptual phase, the city plans to apply for a $31.8 million state grant from Caltrans to fund the project. Streets LA and the office of Los Angeles City Councilman Paul Koretz, 5th District, are currently seeking public input. The deadline to apply for the grant is Sept. 15.

Details about the project were recently made public and information is available on the Streets LA website by visiting streetsla.lacity.org/melrose. A virtual community discussion about “Uplift Melrose” will be held on Wednesday, Aug. 26, at 6:30 p.m., and a link to participate is included on the website.

According to the project description, it would be implemented along a 22-block stretch of Melrose Avenue. One goal is to make the street safer – it is on the city’s list of roads with a high collision and injury rate. Another goal is to make the district more inviting by creating extra space for walking and gathering, bicycling and dining al fresco.

The plan calls for lane reductions on Melrose Avenue, resulting in one traffic lane in each direction. Dedicated bike lanes separated from the street are proposed for east-west travel, and curb extensions would be created at intersections to reduce the amount of distance required to cross. Raised crosswalks would be installed and more trees would be planted to create a shady canopy over the area. Streets LA determined approximately 8,000 square feet of pedestrian space can be added to each block.

Trade-offs include a reduction in vehicle lanes and left turn restrictions everywhere along Melrose Avenue except at Fairfax, La Brea and Highland avenues. Some parking will also be lost to areas where curb extensions are installed.

Melrose BID Board Member Pierson Blaetz, who also oversees the Melrose Trading Post and the Greenway Arts Alliance at Fairfax High School, said “Uplift Melrose” will have a positive impact on the area.

“We are super excited about the project. I think it’s the biggest thing to happen to the Melrose corridor in a long, long time,” Blaetz said. “It is going to transform how the street operates for the people who go there, including pedestrians and bicyclists. It’s not just adding bike lanes and redoing sidewalks. There’s new lighting, trees and outdoor dining that will create a whole new sense of community.”

Isack Fadlon, another member of the Melrose BID’s board, said the project is sorely needed. The Melrose BID had previously received a $4 million grant from Metro for street improvements, but that money is still unspent and would only go so far, he said. Through discussions between the BID and the city, the idea surfaced to apply for the state grant and envision a much larger project. Streets LA then created the proposal, project description and renderings.

The “Uplift Melrose” project’s future is based on the city receiving the state grant. It was not clear whether the Metro and state grants would be used together for the same project, or separately for different projects in the Melrose area.

“We have been talking about reimagining Melrose for years,” said Fadlon, who owns the Sportie LA shoe store on Melrose Avenue. “I grew up off Melrose, went to Fairfax High and have a business on Melrose. I have family members who still live off Melrose and I am there all the time. To have a project that makes it much more comfortable for walking and bicycling is what our neighborhood needs.”

“People are really excited about this project, which would enliven Melrose,” Epstein said. “Melrose has had a tough year, so people are excited about how this could bring Melrose to life.”

Councilman Paul Koretz, 5th District, is optimistic about “Uplift Melrose” and the benefits it would potentially bring to the area, but believes opposition may surface from business owners upset about losing street parking. He encouraged people with concerns or viewpoints on the project to call his district office at (323)866-1828.

“My concern is we won’t get enough feedback from residents and business owners. Once they hear about these positive and negative elements, I can see business owners being concerned that parking on Melrose will be lost,” Koretz said. “There are a lot of questions. If this community and the neighborhood are for it, I am certainly not going to stand in the way. But my fear is the opposition will come after we have already decided on what the project is and put in the grant request. So, my hope is to work this out.”

Paul Gomez, a spokesman for the Los Angeles Department of Public Works, which includes Streets LA, said additional community outreach will occur throughout the implementation of the project and the community can still weigh-in about concerns. For information, visit streetsla.lacity.org/melrose.

Beverly Hills will light up for holiday season