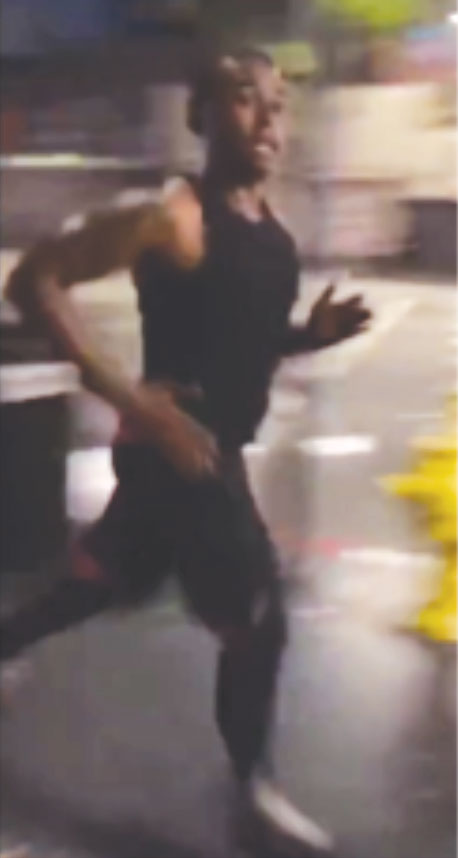 The alleged suspect wanted for the robbery, assault and hate crime in Hollywood was captured on video. (photo courtesy of the LAPD)

Police are asking for the public’s help in identifying a man wanted for allegedly robbing and assaulting two transgender women on Hollywood Boulevard during the early morning hours of Aug. 17. Investigators hope a tip will lead them to a suspect.

The crime occurred at approximately 2:15 a.m. when the suspect approached a group of women in the 6500 block of Hollywood Boulevard and offered to buy them items at a store. The suspect refused to pay for the merchandise and the victims walked away, police said.

A short time later, the suspect, armed with a metal bar, approached one of the victims and demanded her shoes and bracelet, police said. The victim complied, but the suspect grabbed her by the hand and forced her to walk with him for a short distance before she broke free and fled.

The suspect then approached the original group again and assaulted one of the women with a bottle, knocking her to the ground. The victims are transgender women, and the suspect made derogatory remarks about their gender status, making it a hate crime, police said.

Some members of the group captured video of the incident and uploaded it to social media. Police said the suspect is Black, approximately 25 years old, 6 feet tall and 180 pounds, with black hair and brown eyes. He was wearing a black tank top and black shorts.

“I spoke with [LAPD Hollywood Division] Capt. [Steve] Lurie and he assured me that a full investigation has been launched and detectives are making significant progress,” O’Farrell said in a tweet. “My office will continue to monitor the situation until there is full resolution.”

Anyone with information about the alleged crime is urged to call Detective R. Stogner, of the Hollywood Division, at (213)972-2934. During weekends and off-hours, call the LAPD’s hotline at (877)LAPD247.