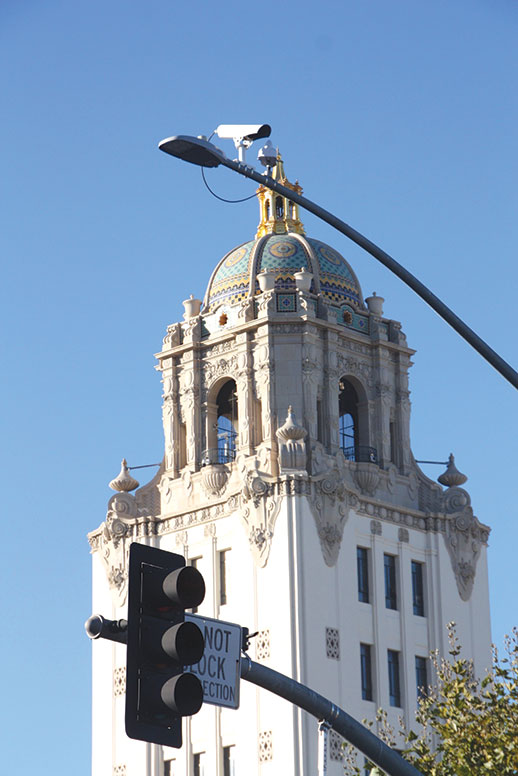 On Aug. 4, the Beverly Hills City Council voted unanimously to move forward with installing an additional 200 security cameras in the city.

The new cameras, which will join the city’s existing 1,515 cameras, are part of the city’s camera project that started in 2005.

The new cameras will cost the city $1.2 million, which will be included in the capital improvement project budget for fiscal year 2020-21, which was supposed to be considered on Aug. 4. Instead, only the camera portion of the budget was approved, and the rest of the CIP budget discussion was delayed until Aug. 18.

Ultimately, the goal is to bring in approximately 900 additional cameras at an approximate cost of $2.75 million per year for five years – or $14 million total – as well as 50 more lanes of automated license plate readers to create “ubiquitous coverage,” according to Assistant City Manager Nancy Hunt-Coffey.

“Initially, when the project was first started, there was this sort of blue-sky vision that it would be a 20-year project that could result in 1,000 cameras, and what we’ve seen is in less than that time, we’ve rolled out more cameras than 1,000, so it’s a very robust program,” Hunt-Coffey said.

“We’re just doing infill in areas where there are not cameras … Not one area of the city is being favored or neglected,” added David Schirmer, city’s chief information officer.

Schirmer said city staff would like to move quickly on the cameras to reach the city’s goal of having all 200 new cameras, which will mainly cover the city’s residential areas, installed by the end of this year.

“Any advantage we can get on time would be helpful,” Schirmer said.

Council members said they’d also like to see as much done as possible as quickly as possible, as multiple protests have been held in the city in the past few months and the cameras allow city leaders and the Beverly Hills Police Department to effectively monitor ongoing events.

“I can’t imagine a better way of spending money than to increase and maintain the CCTV system that the city has,” Rivetti said. “It is invaluable. We solve crime on a weekly basis, if not on a daily basis, with our closed-circuit TV system.”

“I think we always have more need than we have resources,” Rivetti said.

The trailers’ expense – approximately $200,000 for the pair, which is separate from this project’s $1.2 million budget for this year – will be considered at a future council meeting, as will a potential partnership with home security camera companies like Ring and Nest.

Some council members pointed out that the trailers’ cost is equal to the cost of 30 more cameras, but Rivetti said the trailers would be a greater help to the city.

“The trailers allow us more flexibility until we get this whole system built out,” Rivetti said.

If purchasing new mobile camera units cannot happen quickly enough, some council members were supportive of a plan to rent trailers on a short-term basis until the units could be permanently acquired.

While much of the discussion focused on potential improvements to the city’s network of security cameras, city staff also took time to praise the existing system, which Schirmer said is “on par with any system in the world.”

“In terms of per-capita cameras, we certainly are leading the pack, so I think it would be a system we are incredibly proud of and second to none,” Schirmer said.